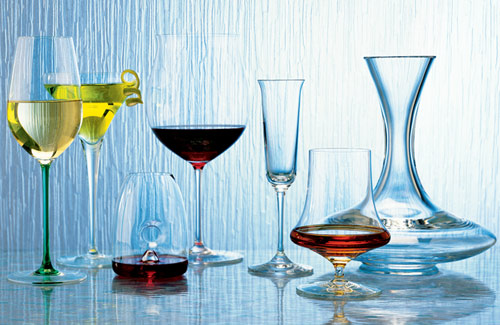 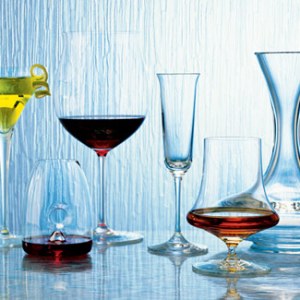 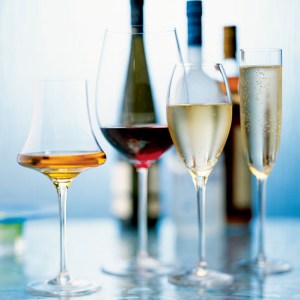 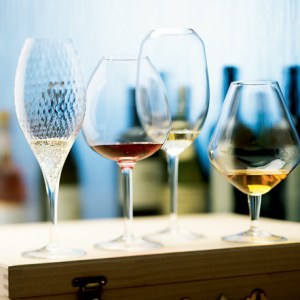 Nick Goldschmidt, group winemaker for Allied Domecq worldwide properties, is a true believer in the virtues of glassware designed for specific wines. But he was not always so convinced. In a memorable tasting held in 1994, Georg Riedel, of Riedel Glas of Austria, invited eight Sonoma County winemakers, including Goldschmidt (then a winemaker for Simi Winery), to sample their Cabernet Sauvignon wines in five different glasses.

Before the tasting, the general attitude among the winemakers (and this writer) was one of skepticism. Most people in the industry believed that a glass was just a glass; the only factor of importance was the liquid inside. But by the end of the session, Riedel had converted the doubters. Today, less than a decade later, Simi Winery—along with almost every other producer in the world—employs specially designed wineglasses to serve its best wines.

Historically, art has trumped science in the design of fine wine-glasses. In 18th-century France, where all but the best wines were quaf-fed from boxy bistro glasses or heavy tankards, the fashion-conscious aristocracy was more concerned with the visual appeal of a glass than with its ability to complement the characteristics of the wine. This function-follows-form approach reached its pinnacle with Marie Antoinette, who, the story goes, allowed her breast to be used as the mold for the now-famous Sevres porcelain champagne coupe. The ornate saucers, framed by silver and gold rams’ heads, came complete with a colored nipple mounted in a crystal stem.

The benefits of wine-specific stemware are based on the delivery system of a glass. The manner in which a particular wine leaves the glass and is released onto the tongue and palate can profoundly affect how the flavor of the wine is experienced. The tongue has four distinct taste zones: sweetness on the tip, acidity along the sides and underneath, saltiness at the edges, and bitterness and astringency at the back. Changing the size and shape of the bowl, lengthening the stem, tipping the rim inward, or causing it to flare slightly, all influence the tongue’s perception of the wine.

In the Riedel Sommeliers series, the Burgundy Grand Cru glass has a generous bowl with a flared rim. The rim is ideal for directing wine to the tip of the tongue so that it highlights the sweet fruit of Pinot Noir while minimizing its acidity. The size of the bowl exposes more of the wine to air, releasing its full aroma or bouquet, especially when the wine is swirled in the glass. The slightly smaller Sommeliers Bordeaux Grand Cru glass, with a 30-ounce bowl, sports a more inwardly curved rim, which directs the wine to the center of the tongue, thereby lifting the fruit of Cabernet Sauvignon and presenting a balance of fruit, glycerin acidity, and tannins.

In developing stemware, Riedel follows a systematic, scientific approach. Glasses are designed in a tasting room, not on a drawing board or computer. The process begins in a series of workshops staffed with winemakers and distillers, who evaluate as many as 18 prototypes. Georg Riedel and his team narrow the group to a few contenders, fine-tune the selections, and then send the finalists through an additional series of tasting rooms. “Just like an orchestra conductor who may call for more drums or more violins,” says Riedel, “what we must avoid is making Beethoven sound like Richard Strauss.”

Riedel applied this approach to a recent project with Champagne Bollinger. In 2001, Bollinger approached Riedel with a request to design a glass that would enhance Bollinger’s distinctive style, characterized by length, complexity, fruit, and a continuous stream of tiny bubbles. A delegation of tasters from the Bollinger cellars in Ay, France, attended a Riedel Glas workshop in Kufstein, Austria. The team tasted from seven flutes and tulips, rejecting the flutes as restrictive of Bollinger’s intended flavors. Three months later, the delegation tasted from four glasses that had passed the initial test and eight prototypes that Riedel designed based on the group’s first tasting notes. After a unanimous selection, Riedel recently released its limited edition Bollinger Champagne Tulip.

Although Riedel is the best-known producer of wine-specific glasses, several other stemware companies have their own unique takes on taste enhancement. Spiegelau, a German glassmaker founded in 1521, is known for its machine-blown wineglasses that many consider more durable than those from Riedel. Waterford, the noted Irish crystal company, produces a Vintage Marquis series that comprises four wineglasses, a brandy snifter, and a classic martini glass. Ravenscroft Crystal offers a mouth-blown Amplifier tasting collection, and Steuben Glass of New York, which this year marked its centenary, recently unveiled its Counterpoint, Evening, and Petal Cut stemware series.

Perhaps the oddest wine-designed glasses are Les Impitoyables (The Pitiless). These French-made glasses are popular in Europe but have had limited success in the United States. The distinctive, mouth-blown originals are made of pure crystal and formed by eight French expert glassblowers utilizing 14th-century techniques. Designed for technical tasting, Les Impitoyables glasses come in Young Red, White, Mature Red, and Champagne stems, in addition to a Taster Glass with a flat bottom (no stem) and indentations for the thumb and index finger. Reputed to be the only glassware Robert Parker uses for professional tasting, Les Impitoyables glasses enhance the ability to savor the maximum aroma in the minimum amount of time.

Despite the increasing attention paid to specially designed stemware, skepticism persists. More and more, however, experts seem convinced of the value of glasses designed to complement specific wines. Larry Stone, wine director at Rubicon, one of San Francisco’s top restaurants, maintains a stock of about $12,000 in fine wineglasses, including stems from Riedel and Spiegelau. Robert Mondavi, another believer, exclaims over his results with Riedel stemware: “I never dreamed my wines were this good!” In the end, however, it is Georg Riedel himself who best expounds the virtues of wine-specific stemware: “While a glass cannot alter a fine wine or spirit,” he explains, “it can and does dramatically alter your perception of it.”