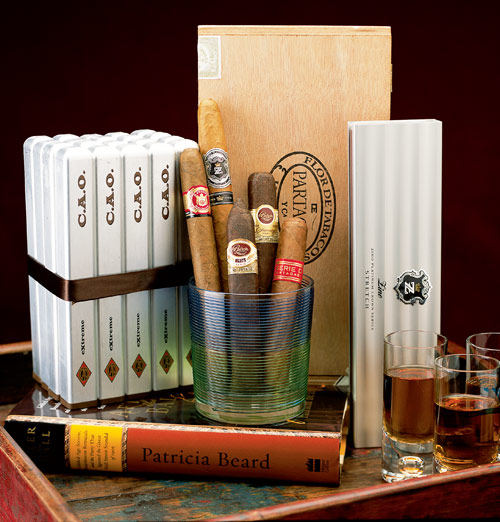 The two most likely ways to obtain these cherished pre-embargo smokes are at auction, where the going rate is $300 to $350 a stick, or from a coveted stash in one of London’s emporiums. The differences between current Cuban Montecristos and those made before 1959 are dramatic. For one, the blend has changed. Also, more than 40 years of aging has matured the flavors. Although difficult to find, these pre-Castro Havanas are legal as long as you can prove their birth year.

Any Cuban Davidoff today is a priceless, full-flavored smoking experience. Zino Davidoff was the first non-Cuban allowed to create his own line of Havana cigars, and his post–World War II frontmarks, with shapes named after famous wine châteaux of France, became legendary. Despite the embargo, the Château Latour, Château Margaux, and even the Davidoff 5000 gran corona remained popular in Europe. Why the 1989 cutoff? It is the year Davidoff left Cuba for the Dominican Republic.

Like Davidoff, Dunhill first made its cigars in Cuba before departing in 1989, when the government demanded a controlling ownership of the company. Dunhill initially went to the Canary Islands before it settled in the Dominican Republic. The Dunhills produced in Cuba were the favorite of some of the most style-conscious trendsetters. Today, you can find them at auction and in a few European cigar shops, including the Dunhill flagship on Jermyn Street in London.

The first puro from the Dominican Republic created such a stir that when it was introduced on the East Coast, enterprising Los Angelenos would hop a Friday flight from L.A., pick up a few sticks in Boston, and flaunt them Saturday in Beverly Hills. The remarkably hearty yet well-tuned smoke remains in short supply. We like the 91⁄4-inch PerfecXion “A” and the new fish-tailed maduros, both of which are often obtainable at charity auctions.

Diamond Crown was one of the first superpremiums, and the new Diamond Crown Maximus establishes a new standard. The Ecuadoran sun-grown wrapper and all-Dominican filler and binder produce a slightly sweet yet porterhouse-like flavor because most of the tobaccos come from the upper priming (stronger) portions of the plant. Tobacconists have been asked to limit customers to two sticks; offering more to your guests merits a standing ovation.

The Serie 1926, a full-bodied cigar offered in sun-grown and maduro wrappers, was introduced in 1994 to mark the 75th birthday of Don José. The name refers to his birth year, with each of the four box-pressed shapes named after one of the numbers. The cigars are constructed with tobaccos that have aged for a minimum of five years, so production is limited. About 100,000 cigars are released a year, which corresponds to fewer than 4,200 boxes that each contain 24 cigars. Our favorite is the No. 2, a 51⁄2 x 52 belicoso.

The 64 ring is the first clue that this is not a novice’s smoke. Twenty cigars come in a glass-topped, Italian-made humidor that is offered in a limited edition of 1,000. Five hundred of the humidors contain cigars with natural wrappers, and the other 500 house cigars with maduro wrappers. La Gloria Cubanas are made in the Dominican Republic by Ernesto Perez-Carrillo, whose father registered the brand after leaving Cuba.