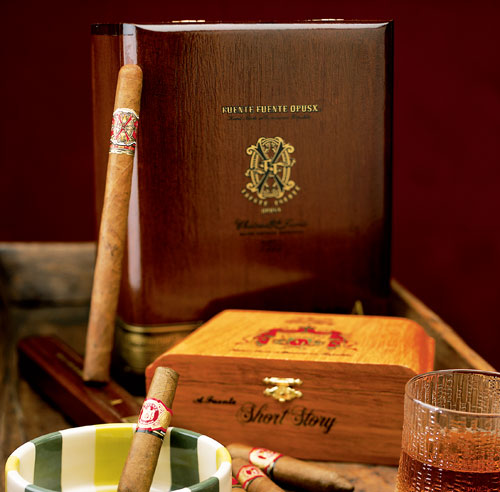 Of the six shapes in the Hemingway line, ranging from the 91⁄2-inch Masterpiece to the 41⁄2-inch Short Story, our preference is the 7 x 48 Classic. It provides thick, Cameroon-wrapped spiciness for a full hour—not so long that a guest overstays his welcome nor so short that the evening ends prematurely. As with every Hemingway, the semi-rounded head is easy to clip, and the pointed perfecto tip is remarkably quick to catch a flame.

Among the most famous stallions in the Havana stable, the No. 2 pyramid perhaps best embodies the Montecristo mystique. Cuba’s cigar factories may lack adequate quality control, but the Monte remains one of the country’s most consistent and flavorful brands. Of the cigar’s namesake, the Count of Monte Cristo, Dumas wrote, “I think he is a delightful fellow, who does the honors of his table admirably … and moreover … he has excellent cigars.” The same can be said about anyone who proffers this classic.

The Cohiba was Castro’s secret cigar, offered only to visiting dignitaries and friends of the Cuban government. Its creation after the revolution stood as proof that the new Cuba could still produce a perfect cigar. Cohiba (the Taino Indian word for tobacco) is triple-fermented in oak barrels, a unique process that adds a subtle softness to its otherwise rich flavor. Of all the shapes, the Churchill Esplendido is the most rewarding.

Offer this robusto-size powerhouse only to experienced smokers and those who take their coffee black. The No. 4 Serie D compensates for its short stature with its strength, and it is one of the most popular of the more than 30 current shapes. The brand was founded by Don Jaime Partagás Ravelo in 1845, and its products are still made in Havana’s oldest continuously operating cigar factory. The brand has enjoyed longevity with its popularity: Evelyn Waugh mentions Partagás in his 1945 novel, Brideshead Revisited.

The 1964 was introduced in 1994 and remains one of the finest Nicaraguan puros (a cigar in which all of the tobacco comes from one country) available today. The cigar’s name is a tribute to the year that the family’s patriarch, José Orlando Padrón, a former Cuban tobacco merchant, began making cigars in Miami. The Anniversary cigars are available with a natural or maduro wrapper, and because they are aged for a minimum of three years, the cigars in this line are constantly in short supply.

Until the company split with the state-run Habanos in 1989, Davidoff was among the most famous names in Cuban cigars. Since then, Davidoff has become one of the most coveted of the Dominican brands. The mild Classic, particularly the 6 x 38 No. 2 panatela, is suitable to offer to first-time smokers or to those who prefer a lighter taste. The stronger Special R robusto and Double R double corona are for those seeking a spicier smoke. Because of its reputation for rejecting almost as many cigars as it accepts, Davidoff is an ideal choice.