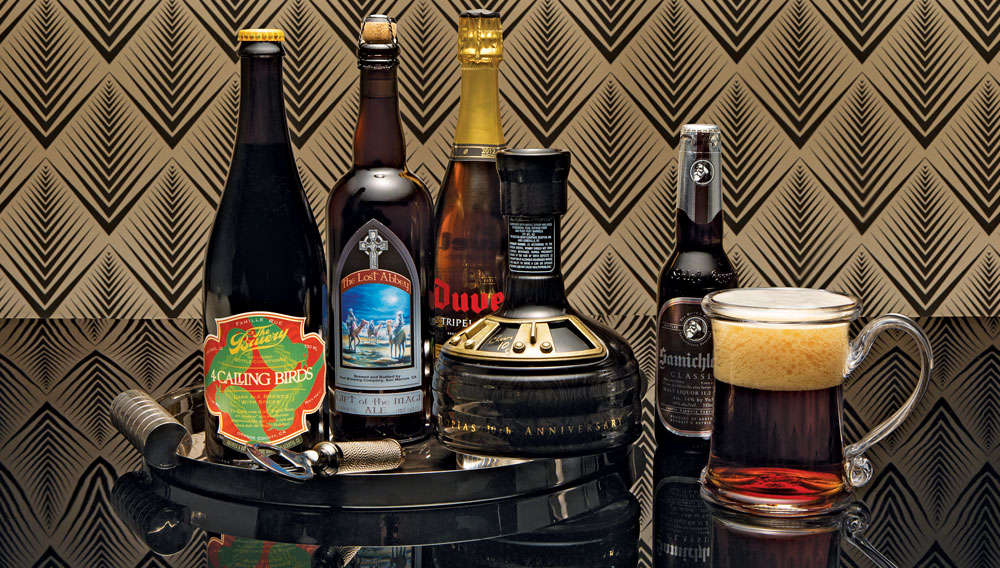 Among the lighter, crisper beers unveiled this season, the Duvel Tripel Hop is truly a cause for celebration. Now an annual release from the 141-year-old Duvel Moortgat Brewery, this Belgian strong ale is 9.5 percent alcohol by volume and features a different aromatic dry hop each year—Citra for 2012—in addition to the Saaz and Styrian Goldings hops used for the standard Duvel. The result delivers a refreshing blast of effervescence that precedes a light malt character and subtle citrus finish. ($15/750 mL; www.duvel.com)

The Port Brewing Company in San Marcos, Calif., uses frankincense and myrrh in the recipe for its Lost Abbey, Gift of the Magi to add a variety of atypical notes, including nutmeg and tart berry. Released each holiday season, this golden-amber ale is 10 percent alcohol by volume and uses a Brettanomyces yeast strain that imparts a delicate musk to help balance the beer’s creamy malt character. ($11/750 mL; www.lostabbey.com)

At a robust 14 percent alcohol by volume, Schloss Eggenberg Samichlaus is the world’s strongest lager. It hails from Austria’s Castle Eggenberg Brewery, which has been in commercial operation since 1681, and is only brewed once a year, on December 6. It then ages for 10 months prior to being bottled. Dark brown in color, this bold brew has notes of caramel and molasses and a warm, mild finish. ($24/four 330 mL bottles; www.schloss-eggenberg.at)

In 2009, the Bruery in Placentia, Calif., began releasing seasonal beers named for the gifts in the “12 Days of Christmas” carol. Its winter 2011 release, 4 Calling Birds, is a dark, strong, and spicy ale that will age well in the bottle for up to eight years. At 11 percent alcohol by volume, 4 Calling Birds follows in the winter tradition with gingerbread spices and notes of bourbon, candied plum, sweet yam, and clove. The Bruery will soon release the next installment, 5 Golden Rings. ($13/750 mL; www.thebruery.com)

Those imbibing a sample of 2012 Samuel Adams Utopias, 10th Anniversary Edition should consider it more an after-dinner cordial than a beer. Blended from components aged up to 19 years in second-fill bourbon, Port, and rum casks, this iteration of Utopias is a staggering 29 percent alcohol by volume. It is nearly black in color and should be served at room temperature in 2 oz. pours. Smooth and syrupy, it delivers hints of raspberry, tannins, and earth. On the palate, notes of molasses shine through the stronger flavors akin to those of an aged Port or Cognac. ($160/24 oz. decanter; www.samueladams.com)