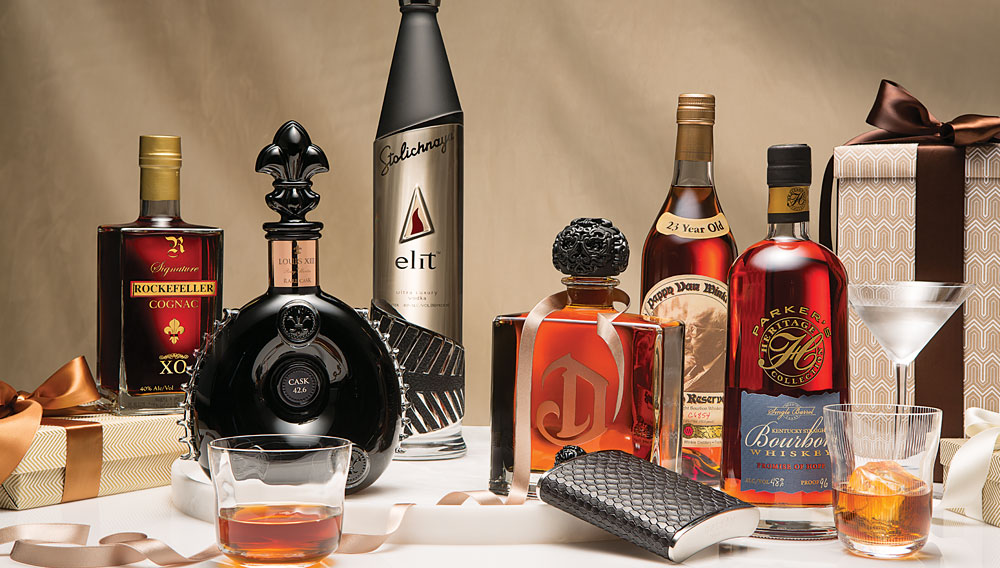 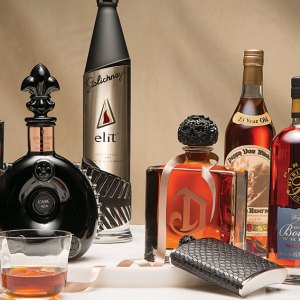 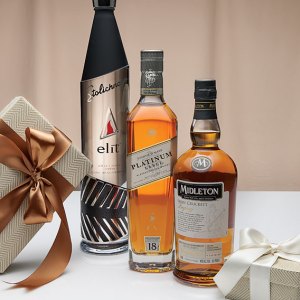 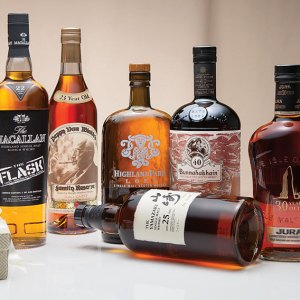 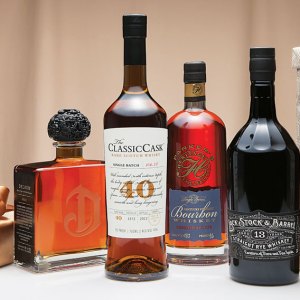 THE PUREST OF PLEASURES

Last year, elit by Stolichnaya demonstrated the importance of the water used in vodka with its limited-edition pristine water series—the Himalayan Edition. This year brings the second offering, this time from New Zealand—the Blue Spring. Revered for its clarity, Blue Spring water is naturally filtered through the pumice of the towering Mamaku Ranges, a process that renders it one of the purest waters in the world. The New Zealand Edition is bottled in crystal and handsomely boxed in the island nation’s native kauri wood. Just 300 bottles have been produced, and a portion of sales will be donated to the Oceana charity, which is dedicated to conserving our oceans. ($3,000)

This well-respected whiskey, named in honor of Barry Crockett, Midleton’s longtime master distiller, was introduced in Ireland two years ago, but it has only recently become available in the United States. Light and peppery with hints of citrus, cinnamon, and oak, it is equally refreshing served straight or with a single ice cube—ideally, one made with filtered water. ($249)

Recently introduced in the UK, this 18-year-old blended scotch has just arrived in the U.S. Inspired by the Walker family’s tradition of creating private blends for favored customers and company directors, this blend—a small-batch whisky positioned just below Blue Label—is a welcome addition to the Johnnie Walker family. Rich spices and a hint of smoke make this an ideal winter’s dram. ($110)

Carolus H. J. Nolet, chairman of Nolet Spirits Worldwide, is the patriarch of the world’s oldest distilling family, whose enterprise began in 1691 in Holland with the production of Dutch genever. A few years ago, to celebrate his tenure, Nolet decided to create the world’s most expensive gin. A three-year search for rare and unusual botanicals resulted in Nolet’s Reserve Dry Gin, which contains verbena and saffron, as well as a number of “secret” ingredients, though, on the palate, flavors of rose petals, apples, and Chinese spices can be detected. At 104.6 proof, this clear spirit makes a festive martini. ($700)

Only 200 bottles are available of this honeyed-apple and sea-spray-tinged single malt from Islay’s next-door island neighbor. After being aged for 27 years in ex-bourbon barrels, the whisky was transferred to oaken sherry casks to age for an additional three years, imbuing it with a deep burnished color as rich as its flavor. ($550)

The MacAllan | The Oakley Flask

When a high-tech industrial design company applies its talents to creating a vessel for one of the world’s greatest single malts, you have a combination made for gifting. To accompany a bottle of the Macallan 22 Year Old whisky, sports equipment manufacturer Oakley has crafted a 21st-century armor-bodied flask made of laser-welded food-grade steel wrapped in carbon-fiber composite and given an intensive passivation and electro-polishing treatment. The container comes with a suitably styled funnel with a rectangular opening for ventilation and to decant the whisky. ($1,500)

This is the rich, meaty bourbon everybody wants but few can find. The cause of this scarcity, according to a source at Buffalo Trace Distillery, where the bourbon is aged: “There’s not a lot of bourbon left in the barrels after 23 years.” Although the actual number of bottles produced each year is a closely held secret, a new batch is released every autumn­—and quickly snapped up by collectors and connoisseurs. ($240)

This 15-year-old single malt, named after one of Norse mythology’s most mischievous characters, is the distillery’s second release in the Valhalla Collection, a set that will ultimately consist of four limited-edition whiskies, each of which is inspired by one of the legendary Norse gods. Like the shape-shifting deity for which it is named, this whisky changes, exhibiting a profound smokiness that gradually transitions to sweet sherry spice. ($249)

More than 40 years ago, Glasgow wine merchant J.G. Turney filled a number of casks with newly distilled whisky; these were recently discovered in the Bunnahabhain warehouse by master distiller Ian MacMillan. Although MacMillan judged the Turney casks to be of exceptional quality, he found that enough whisky remained to fill only 750 bottles. Renowned Scottish illustrator Iain McIntosh created a bespoke label for this lightly peated single malt, evoking its “journey of discovery” from Glasgow to Islay. Each bottle is numbered and signed by MacMillan. ($3,200)

Suntory, one of Japan’s two leading distilleries, produces 30 different whiskies, but only the 12 and 18 year old single malts, along with their Hibiki blend, have been regularly exported to the U.S. These three award-winning whiskies are joined this year by the Yamazaki 25 Year Old Single Malt. Each numbered bottle contains a liquid cornucopia of sherry-soaked almonds, dark chocolate, and dried fruit. ($1,600)

This limited, one-time offering of 2000 vintage rye whiskey was discovered aging in American oak barrels by Robert Cooper of Cooper Spirits. This powerhouse pour is made from 100-percent rye grain and bottled at a thundering 101.3 proof. Top notes of salted caramel and dense tobacco only begin to suggest what the cattlemen of Dodge City might have been drinking after the trail drives on Christmas Eve. ($120)

Aged in 2007 Château d’Yquem barrels for 34 months—just two months shy of becoming an extra añejo—this deep bronze añejo plus possesses thick flavors of burnt orange peel and pungent rose petal. This private reserve limited edition is attractively inset in a black case, and the tequila comes with a python-skin flask and stopper to match the one that caps its hand-blown French glass bottle. ($825)

The fact that barrels literally hold the secret to whisky maturation is tastefully evident in this blend of 80 percent single malts and 20 percent grain whiskies, none of which are less than 40 years old. Twenty-five-year-old whiskies distilled in 1972 and aged in ex-bourbon barrels, European hogsheads, and sherry butts from Speyside, the Highlands, and the Lowlands were married together for an additional 15 years before being finished for six additional months in sherry casks from Jerez. This complex formula has produced a very limited number of bottles. ($375)

Each year, Heaven Hill master distiller emeritus Parker Beam releases a limited-edition bourbon from barrels he has personally selected. This year’s offering assumes an even more personal meaning, as Heaven Hill will donate $20 from the sale of each bottle to help fight amyotrophic lateral sclerosis (ALS), or Lou Gehrig’s disease, a condition with which the longtime distiller—a grandnephew of Jim Beam—has been diagnosed. As a result, Beam has selected 100 of his best barrels to produce a limited edition single-barrel bourbon under the “Promise of Hope” banner. ($90)

The two ancient stills that give this highly individualistic rum its distinctive Demerara flavor date from the 18th century and have been producing Pusser’s rum ever since their staves were first fashioned from oak. Today, Pusser’s are the only wooden pot stills left in the world, and this 15-year-old rum, with its musty toasted-oak nuances, is a fitting extra-aged tribute to what once was the official drink of the British Royal Navy. ($65)

A few years ago, Pierrette Trichet, cellar master for Rémy Martin, discovered a cask of eau-de-vie so spectacular she bottled it without blending. Now a second cask has been discovered, watched over, and recently bottled as the celebrated Cognac’s second single-barrel offering in its nearly 140-year history. Louis XIII Rare Cask 42.6 (the numbers refer to this Cognac’s 85.2 proof) has been bottled in a rare, black-crystal Baccarat decanter accented by an engraved, 22-karat rose-gold neck band. Full of autumnal flavors of wild mushrooms and candied fruit, this exceptional tierçon contained only enough Cognac to fill 738 individually numbered decanters. ($22,000)

On December 24, 1818, the Empress of Russia, Maria Federovna, asked Maison Hennessy to create a special Cognac as a birthday present for her son, Czar Alexander I. Almost 200 years later, Hennessy pays tribute to this royal gift with the release of Paradis Impérial, a Cognac made possible by the producer’s vast store of more than 350,000 tierçons, many dating back to the 19th century. Paradis Impérial, which is not an exact duplication of the original imperial tribute, falls between Richard Hennessy and Paradis. A blend of eaux-de-vie ranging in age from 30 to 130 years, this Cognac is vibrant, revealing flavors of caramelized apple, sweet floral smoke, and honey. The stylized sculpted Baccarat decanter, with its collar of engraved 18-karat gold and silver, is individually numbered and housed in a wooden presentation case. ($2,700)

Contained within its graceful and stylistic gold-entwined carafe topped with a 24-karat-gold stopper, this blend combines Cognacs that predate 1888 and contain the rarely encountered Folle Blanche grape, the predominant varietal found in many pre-phylloxera Cognacs. The balance of the blend is composed of Ugni Blanc. This is a heavy-bodied digestif, a worthy accompaniment to a Don Carlos or Padrón cigar after a hearty meal. A gilded watch fob containing Pierre Frapin perfume is included in the elaborate display case. ($5,700)

One of the newest Cognacs bears one of the world’s most recognized names. Prior to arriving in America from France, the Rockefellers’ surname was Roquefeuille, so it is not entirely surprising to find the fleur-de-lis referencing their roots on this elegant XO. With its caramelized peaches and candied fruit, it is a meaty assemblage of 20-year-old eaux-de-vie that tastes much older. ($100)