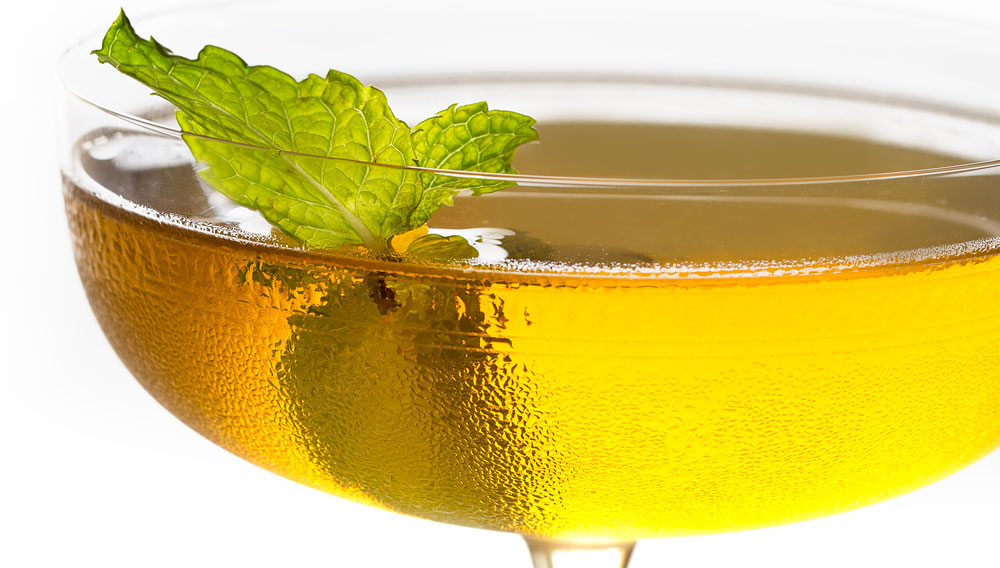 Ever since a reformed Ebenezer Scrooge invited Bob Cratchit to discuss their affairs “over a Christmas bowl of smoking bishop,” it has been a seasonal tradition to artfully apply a little holiday spirit to one’s guests. Sometimes these drinks are tailor-made for winter festivities. Scrooge’s bowl of bishop, for example, is a hot punch aromatic with baked oranges and winter spice, and a descendent of the sherry-fueled wassail that dates from the Middle Ages. Other libations, such as the familiar eggnog, began as year-round refreshments and over time became associated with the season. And of course, the holiday-drink catalog is continually expanding, as today’s creative bartenders add their own contributions to the canon.

This year, we are offering the thoughtful host a taste of the old and the new. First, we looked back in history, dusting off classic holiday drinks and sprucing them up for modern tastes. Then we asked some of the most inspired mixologists in the United States for their best original holiday cocktail. We rediscovered drinks such as a classic stinger—modernized by replacing heavy crème de menthe with the dry chill of Giffard’s Menthe-Pastille, a premium mint liqueur newly imported from France—and eggnog, roused from its long winter slumber by añejo tequila and amontillado sherry. Sam Ross, the renowned New York bartender behind Milk & Honey and Attaboy, led the contemporary category by spiking a punch with juniper-scented gin and Zirbenz Stone Pine Liqueur of the Alps and creating a drink with the bracing energy of a snowy walk through the woods.

There is also an art to choosing the right cocktail for the moment. Consider your holiday gathering—a merry houseful of guests, an intimate dinner party, or a quiet night by the fire—and then select one of the distinctive, delicious cocktails on these pages. As even Scrooge knew, a well-made cup of cheer is the essential start to the most memorable celebrations.

The stinger is nearly a century old, and for decades it served as such an ideal nightcap that it appeared in the glasses of such tipplers as Cary Grant as Andy Crewson in 1957’s Kiss Them for Me and Sean Connery as James Bond, first in Thunderball, followed by a second round in Diamonds Are Forever. The 1970s era of excess led to an unfortunate overapplication of green crème de menthe and drove the stinger from grace. But the simple concoction is finding redemption among today’s mixologists. The standard model is based on Cognac, but this southern-style interpretation uses the soft, warm flavor of wheated bourbon in its place. The typical crème de menthe can make this drink too heavy, but the dry, austere character of Giffard’s Menthe-Pastille brings a wisp of minty chill to the drink.

Combine ingredients in a cocktail shaker and fill with ice. Shake well until chilled, about 30 seconds. Strain into chilled cocktail glass. Garnish with a fresh mint leaf.

To create a suitable cocktail for his holiday parties, New Orleans native Chuck Taggart tempered the mellow flavors of apple and pear brandies with a kick of allspice liqueur and a bitter Italian vermouth. Named for the traditional Creole Christmas eve dinner, Taggart’s drink makes a heady, festive start to a celebration.

Combine ingredients in a mixing glass and fill with ice. Stir well until chilled, about 30 seconds. Strain into chilled cocktail glass. Garnish with whole star anise.

The class of punches known as bishops—served hot and sometimes flaming, and aromatic with baked oranges and spice—goes back centuries, to a time well before the advent of central heating and LED holiday lights. This punch provides its own floor show, with a fiery presentation and extra pyrotechnics provided by the aromatic sparkle of a sprinkling of winter spice. Be sure to use a heat-resistant punch bowl and ladle, and lower the lights before setting the punch aflame.

4 to 6 satsumas or other small oranges

Stud the small oranges and one of the large oranges with cloves, piercing the skin with the clove’s sharp tip and pressing until only the head remains visible. Bake the clove-studded oranges at 350 degrees for 30 minutes. Let cool. Place the small oranges in the punch bowl. Cut the large orange into thick slices and add to the bowl. Warm the rums and Cognac by immersing the bottles in a hot-water bath, add to bowl.

While the liquor is warming, combine the cider and 1½ cups water in a saucepan and heat to near boiling. Add the juice of one lemon and the remaining orange and pour the mixture into a pitcher.

Immediately before serving, moisten the clove-studded oranges with a light sprinkle of overproof rum and sprinkle with 2 tablespoons of Demerara sugar. Make sure the punch bowl is nowhere near the curtains, the Christmas tree, low-hanging light fixtures, the dog, or other flammables.

Place the sugar cube in a long-handled metal ladle and douse liberally with overproof rum. Holding the ladle away from the punch bowl, use a match to ignite the rum-soaked sugar cube. Carefully drizzle the flaming rum into the punch bowl, which will set the liquor mixture on fire. Sprinkle or shake spices and sugar into the flames so they sparkle and fill the air with a festive aroma. Punctuate by squeezing the citrus oil from strips of orange zest into the flame, for more pyrotechnics.

After a minute or so, extinguish the flames by slowly adding the hot cider mixture to the punch bowl, stirring with a long-handled metal ladle to help dilute the mixture. Serve immediately, pouring into punch cups through a strainer to remove any bits of charred clove. Serves 12.

Holiday punches are frequently dark and rich, but this version from New York bartender Sam Ross—formerly of Milk & Honey, and more recently a partner at Attaboy—is bright with the crisp flavor of gin. The spirit’s juniper aroma is enhanced with pine liqueur, a touch of absinthe, and a festive splash of Champagne.

Demerara Date Syrup: Combine 2 cups Demerara sugar with 1 cup water in a saucepan over medium heat, whisking until sugar is completely dissolved. Cool and transfer to a container. Cut a large square of cheesecloth and place 1 cup crushed dates in the center. Draw the corners together to form a bag and tie closed with kitchen twine. Add the bag to the container of syrup. Let steep at room temperature for three days. Strain before using to remove sediment.

Lemon Ice: Using small molds or a muffin tin, place a thin slice of lemon in each compartment and fill with water. Freeze overnight.

Absinthe-Drizzled Dates: Spear a date on a cocktail pick (ideally a twig of pine or Douglas fir) and drizzle with several drops of absinthe.

After making its debut in the mid-1800s, the Tom and Jerry was the quintessential holiday drink for the better part of a century. So firm was its position in American seasonal festivities that Damon Runyon noted in his 1932 short story “Dancing Dan’s Christmas,” the drink “is once so popular that many people think Christmas is invented only to furnish an excuse for hot Tom and Jerry, although of course this is by no means true.” Traditionally made with brandy and rum, the Tom and Jerry formula encourages experimentation. This version follows the lead established by Runyon’s characters and uses rye whiskey to give the drink a special spark.

Beat the egg yolks until thin, and gradually whisk in the sugar. Add the rye and the spices, and whisk to combine. In a separate bowl, beat the egg whites until stiff and fold into the yolk mixture. The batter can be made in advance and refrigerated, but should be consumed the same day it is made. Stir it to combine again before serving. Place the batter in a serving bowl (ideally a classic Tom and Jerry bowl, which is available in antiques shops and on eBay).

For serving: Put 2 ounces of batter into a Tom and Jerry mug or small coffee cup. Add 1 ounce rye whiskey and 1 ounce Cognac and stir. Slowly fill the mug with equal parts hot whole milk and boiling water, around 4 ounces total per serving (for a richer drink, just use milk), stirring constantly so a foam rises above the lip of the cup. Top with grated nutmeg. Repeat for each serving desired. Serves 10.

A good holiday eggnog should never come from a carton—but neither should its preparation take up too much of the host’s precious time. This blended version from Portland bar manager Jeffrey Morgenthaler can be knocked together in advance and actually improves after a mingle overnight in the refrigerator. In place of the traditional brandy and rum, Morgenthaler combines the rich tones of añejo tequila and the nutty mellowness of amontillado sherry, resulting in a nog of unparalleled appeal.

This may be a relic from mixology’s Mesozoic era, but it is undeniably elegant in its simplicity and worth a trip back in time whenever the mercury heads south. With few ingredients to mask the whisky’s flavor, the choice of spirit is key. We prefer the rugged, smoky complexity of a well-aged Islay single malt, resulting in a particularly rewarding and bone-warming toddy.

1 cube Demerara sugar, or to taste

Peel and zest of 1 lemon

Preheat a toddy mug or large cup by rinsing with boiling water. Add whisky, boiling water, and sugar to taste. Stir. Use a vegetable peeler or paring knife to cut a long, wide strip of lemon peel. Stud the lemon zest with whole cloves and use as garnish.

The earthy, smoky character of mescal—an ancestral relative of tequila mainly produced in the Oaxaca region of Mexico—is increasingly prevalent on cocktail menus across the country. At Liberty Bar in Seattle, Dylon Tubb uses the spirit in a spin on the classic Irish coffee, sweetened with high-quality chocolate syrup to produce a flavor between mole and mocha. Buy the best chocolate syrup you can find, or better yet, make your own using a premium unsweetened cocoa powder such as those from Valrhona or Scharffen Berger.

Preheat a mug by rinsing with boiling water. Add coffee, mescal, chocolate syrup, and simple syrup to taste. Stir to mix. Using a whisk, whip cream until thick but not stiff. Top drink with a spoonful of cream.