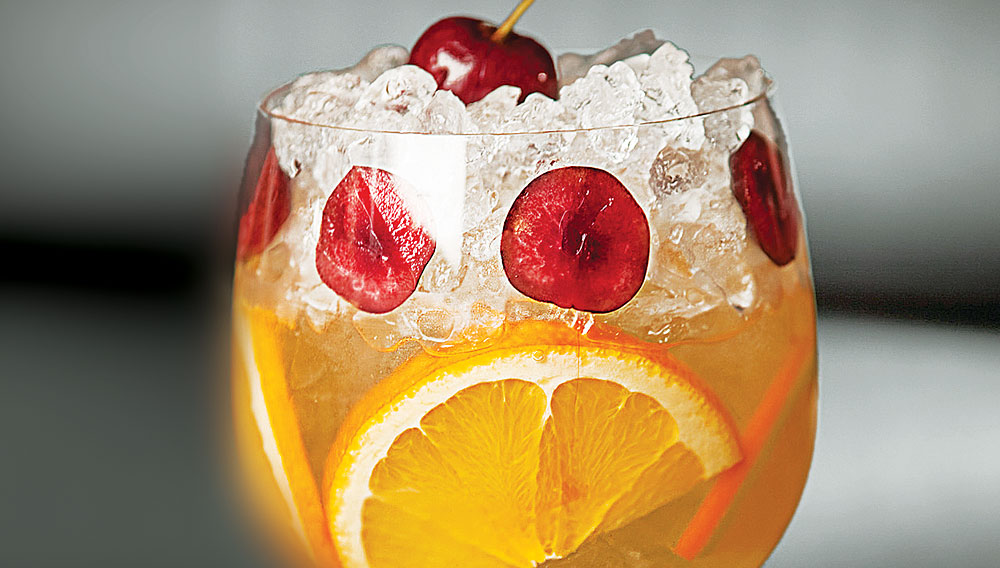 In addition to making generous use of the newly invented drinking straw, the 19th-century cobbler is credited with introducing the modern-day cocktail shaker. Previously, most bartenders used the Boston shaker, which consists of two different-size bar glasses placed one on top of the other, but the cobbler-style shaker—nearly identical to the single-unit, two-cap style found in most home bars—became popular alongside this drink, allowing for quick straining. Incidentally, the strainer was important because the cobbler was most likely the first drink to have been shaken with ice, which arrived at local bars around 1840.

The cobbler, which is said to have been the 19th century’s most popular cocktail, represents a broad category of colorful mixtures that incorporated fresh fruit and fortified wine or spirits as its base liquor. While the mixing method has moved from muddling the fruit with liqueurs and syrups in the 19th century to shaking the liquid ingredients then garnishing with the fruit, the result is a vibrant and light-on-alcohol refreshment.

“Using fresh fruit, whatever’s in season, makes all the difference in the world,” Albert says. “My grandmother was a bartender, and back in her day, they would only use what was growing in their garden. And we’re seeing that whole mentality coming back.”

Add ingredients to a glass filled with shaved ice, and garnish with in-season citrus and berries or fresh mint and berries. Serve with a straw.

Add rum and simple syrup to a wine glass and stir well. Add crushed ice, then layer cherries, oranges, and more crushed ice. Top with Prosecco. Garnish with a sprinkle of nutmeg, then place a drunken cherry on top and drizzle with a spoonful of cherry juice. Serve with a straw. (*To make vanilla simple syrup, bring 2 cups superfine sugar, 1 split and seeded vanilla bean, and 1 cup water to a boil. Cool completely and store at room temperature in an airtight glass container.)

After cleaning the cherries, remove the pit by splitting into two equal halves or use a cherry pitter. Combine cherries, bourbon, and simple syrup in a plastic container and place them in a refrigerator overnight. (*To make cinnamon syrup, bring 2 cups superfine sugar, 1 cup water, and 4 cinnamon sticks to a boil. Cool completely and store in an airtight glass container.)

Place two orange wheels at the bottom of a wine glass, then fill with crushed ice and liquors. Stir well and top with more crushed ice if needed. Garnish with brandied cherries and orange slices. Serve with a straw.