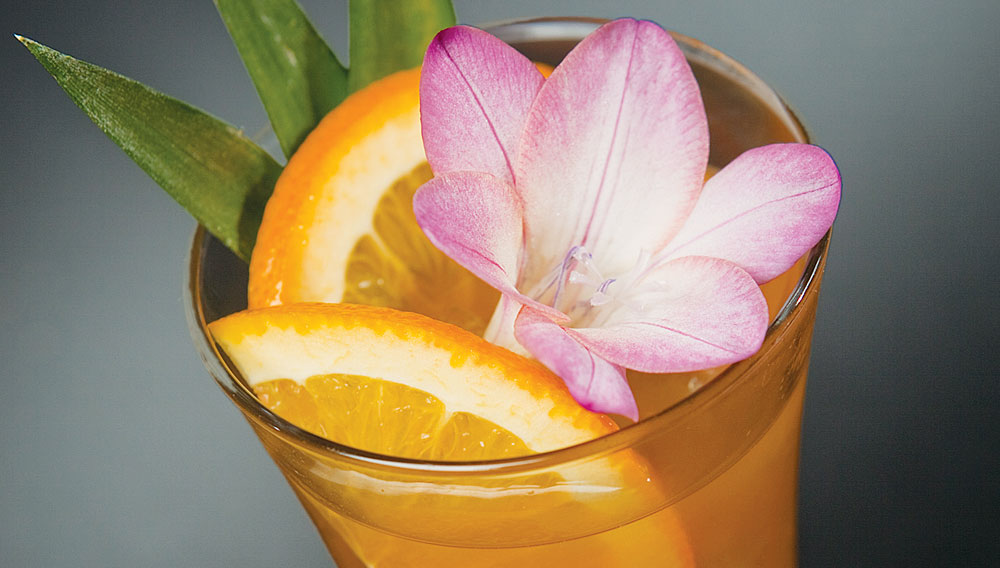 The father of tiki culture is indisputable: Don the Beachcomber, who served as a bootlegger during Prohibition and opened his famed Polynesian-themed restaurant off Hollywood Boulevard in Los Angeles in 1937. He is credited with inventing a number of boozy rum-based drinks, including the zombie, navy grog, and Tahitian rum punch.

When the tropical-themed restaurant Trader Vic’s opened in Oakland, Calif., in the late 1930s, a friendly tiki rivalry was born. Both Vic and Don the Beachcomber, who presciently capitalized on Americans’ new fascination with island culture in the 1940s, claim to have invented the mother of all tiki drinks, the mai tai, but regardless of who came up with the idea, both men were inspired by their journeys in the West Indies and Caribbean, where the swizzle originated. The swizzle and its attendant stick were a product of 1930s Bermuda, where icy rum drinks were served with a branch from a local bush used to stir the concoction and ensure proper dilution.

Tiki drinks generally incorporate an almond-flavored syrup called orgeat, but many old recipes also incorporated velvet falernum, which is an opaque white syrup (with or without alcohol) with cloves, lime, vanilla, and allspice flavors. Fee Brothers makes a non-alcoholic version, and John D. Taylor’s, from Barbados, is 22 proof.

TIKI WITH A TWIST

Combine ingredients in an ice-filled shaker and shake vigorously. Strain into an ice-filled glass or tiki mug. Garnish with a brandied cherry, pineapple, and an edible flower. (*To make orgeat syrup, soak 1 lb. of blanched almonds in cold water for 30 minutes; drain, then crush or chop. Mix with 11/2 quarts water and let soak for 1 to 2 hours; strain through cheesecloth. Dis-card pulp. To strained almond water, add 11/2 lbs. of granulated sugar and cook over low heat until dissolved. Let stand 15 minutes, then add 3 oz. vodka and 2 Tbsp. orange or rose flower water. Allow to cool.)

Combine first five ingredients in an ice-filled shaker and shake vigorously. Strain into an ice-filled glass or tiki mug. Float spiced rum on top. Garnish with orange slices, pineapple, and an edible flower.

Combine rum, lime juice, and guava nectar in a 12 oz. tumbler. Fill with crushed ice and swizzle with a swizzle stick or bar spoon by rolling the swizzle rod in the palm of your hands until the outside of glass becomes frosted and the drink gets frothy. Finish by dashing orange bitters on top of drink. Garnish with fresh ginger, fresh mint, and a stick of fresh sugarcane.