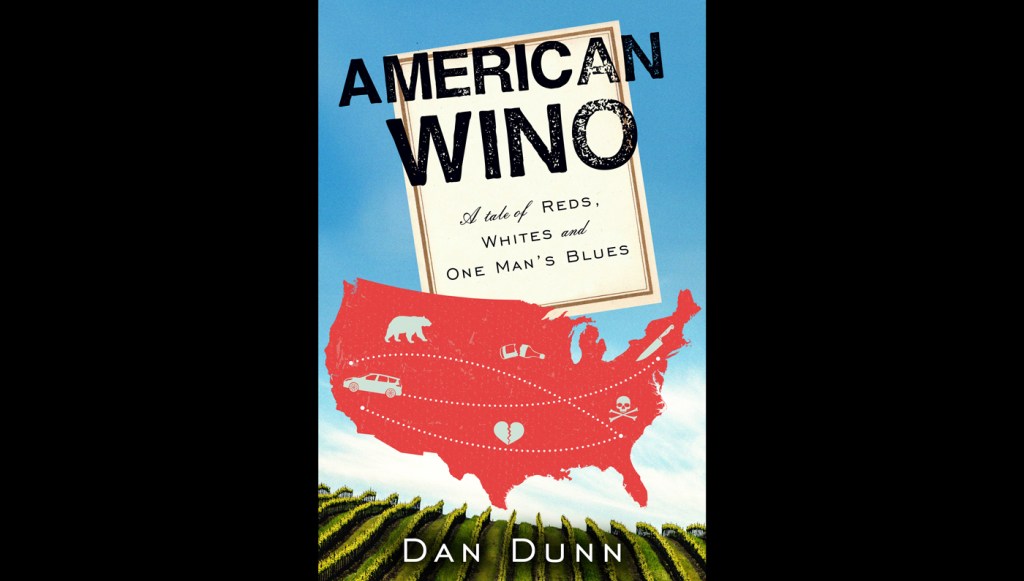 Dan Dunn has made a career out of drinking; he’s spent many years writing about booze and beer. But on the heels of an existential crisis, he realized he knew almost nothing about wine and was tired of faking his way through tastings. So, he decided to remedy both problems by embarking upon a three-month-long, cross-country road trip, visiting as many wineries as possible and drinking his way through every wine-growing region of the United States. His goal: to learn enough about wine to give a talk at Pebble Beach Food & Wine, the noted epicurean event. The resulting book, American Wino: A Tale of Reds, Whites, and One Man’s Blues (HarperCollins), was just released; it’s equal parts wine guide and travel memoir, in which Dunn hangs out with celebrity winemakers, picks up a considerable amount of wine knowledge, and does some serious introspection along the way. This spring found him back at Pebble Beach, presenting essentially a sequel to last year’s seminar. We caught up with him immediately after his talk. (harpercollins.com)

It’s noon and you’re at Pebble Beach. What have you had to drink so far today?

Well, right now I’m sipping on a glass of 2012 Jordan Vineyards & Winery Cabernet Sauvignon, which is really delicious. I had some Soter Vineyards Mineral Springs Brut Rosé earlier. We had some Sokol Blosser Pinot Noir. We had some Sleight of Hand Cellars Renagade Rosé from Walla Walla, Washington. What else did we drink? Oh, we had Dave Matthews’ wine, 2014 Blenheim Vineyards Painted White from Charlottesville, Virginia.

Which wines pair best with your book?

I guess maybe you could bookend it with the Jordan, because that was the first stop on my trip: the Jordan Cab. And then Caduceus Cellars from Jerome, Arizona—anything from them. It’s owned by Maynard James Keenan, who’s the lead singer for Tool, and that was my last winery that I went to on the trip. So they should start with the Jordan and end with the Caduceus. Maybe the middle wine should be something from the middle of the country; I’d say maybe something from Missouri. There’s a winery called Hermannhof; that’s in Hermann, Missouri. So we’ve got the beginning of the trip, the middle of the trip, and the end of the trip.

How much wine knowledge did you have before you started your journey around the country?

There are fourth-graders who knew more about wine than me. I knew enough to get by and sort of bluff my way through some things, but I certainly couldn’t really hold my own. For instance, I’m sitting here at Spanish Bay (a golf resort in Pebble Beach); I’m looking at Ray Isle; you know, Ray is a wine writer for Food & Wine magazine. And I wouldn’t want to get into a wine trivia question with Ray, at least not back then. Probably wouldn’t want to now, either, but I certainly know a lot more than I used to.

What was the most useful thing you learned about wine on your journey?

That whenever you need it, you’ll be able to find it, because they make it everywhere! Anywhere you go in the United States, there’s a winery somewhere in that state

Which American wineries do you think we’ll be hearing a lot about in the near future?

There’s a place in Delaplane, Virginia, called RdV Vineyards. I really loved their wine. They do a Bordeaux blend there that I think is delicious. And there’s a little wine that I love in Vermont: Shelburne Vineyard. They make a Marquette Reserve that I really love. It’s already known, but I really love the bubbly from Gruet Winery in Albuquerque, New Mexico. I went there on the trip and I have a great fondness for that. And, again, this is not a surprise to a lot of people who are in wine, but I love the Pinot Noir from the Willamette Valley in Oregon: the Sokol Blosser, Dominio IV, and Archery Summit wineries, and the Soter that I mentioned earlier. Colorado: There are some wines in Peonia, Colorado, that were pretty good. Alfred Eames, I really like his wine.

What was the most important non-wine-related thing you learned during your time on the road?

Well, you know, being out there for so long by myself certainly helped me get centered. As you know from reading the book, I was sort of facing up to what had happened with my brother, and a relationship that had just ended, and my mother. There were a lot of ghosts and life problems that I’d brought with me on the trip. And being out there alone, I found out how to cope with those things and put them where they needed to be, whereas before they were just bouncing around all over my head. And I think that going out and meeting all these people and being in all these different regions of the country was a really transformative experience for me.

What was the single best bottle you drank during your trip?

Oh boy. I had a, what was it, a 1966 Figeac that I drank with Charles Smith. That was really great. My favorites … that’s tough. I had some stuff that people busted open, old stuff. I went to Sam Sebastiani’s farm—you know, Sebastiani from Sonoma. He has a farm, Winemaker’s Island, like a duck-hunting sanctuary, in McGrew, Nebraska. I stayed with him and his wife, and Sam busted out really good stuff. I couldn’t tell you specifically what it was. If you ever have a chance to go drinking with Sam, do that.

I had some good Cardinale and Lokoya, up in Oakville, in Napa Valley. I really enjoyed those wines. When I was in Virginia, there’s this place called Barboursville Vineyards, and I drank some stuff with Luca Paschina, the winemaker there. He busted out some old Italian stuff. That was really the beauty of the trip—when you go out and you see these places, and you go and meet the winemakers, and they take you in. And that’s when the magic happens, as you know, is when you get into these wineries and you befriend the winemakers, and next thing you know they’re cracking open some stuff that blows you away.

What was your favorite moment while researching the book?

Well, I really enjoyed hanging out with actor Kurt Russell up in Los Alamos, up at his place there in Santa Barbara County. That was a lot of fun. But I think my favorite memory from the trip is sort of a collection of memories. And that is, waking up every day and having no idea what I was going to encounter and how the wines were going to be and how the people were going to be. And every day, being constantly surprised and filled with wonder about just how great it is that they’re making wine in every state in the United States. Places that I never expected to have a booming wine business, and they did.

What are some of your favorite places to drink in Los Angeles, where you live?

Well, I’m a west-sider, so I get very antsy if I go east of the 405. I’m sort of a creature of habit. I drink at the Tasting Kitchen on Abbot Kinney (Venice Beach). As for wine, there’s a place called Zinqué that I like. Hatchet Hall, over on West Washington, is great. There’s a place across the street from Hatchet Hall called the Corner Door that I like to go to; that’s more for cocktails, but I love that place. Where else? Scopa Italian Roots in Venice is great. You should go check that place out. Then there’s the Misfit Restaurant and Bar in Santa Monica that I like. And Baby Blue’s BBQ. I love to bring in a great bottle of wine and sit down and plow through a plate of ribs.

What wine would you choose to drink with that plate of ribs?

That’s pretty much the wine you’d pick to drink with anything, right?

Yeah. You know that scene in the book, at the end, when I take it to the beach with my brother; that was fantastic. I wouldn’t mind having another bottle of that. If you’re reading this, Screaming Eagle, feel free to send me one. Or Dunn Vineyards. Because why not drink wine that has your name on it?

Dead or alive. Well, I wish my brother were alive again, as I talked about in the book. If we’re talking about American Wino, and I could drink with anybody dead or alive, it would be my brother, and have him be back alive again. Beyond him … maybe he comes with me, and he and I go drinking with Marilyn Monroe.

Why not? Because I’m a red-blooded male. I would like to have had a glass of wine with Marilyn Monroe.

And if it were up to you, what would she be drinking?

Why should people read your book?

The book’s been described as Eat, Pray, Love meets Sideways while On the Road. And I like that. It’s obviously not a traditional wine book; it’s a memoir with a lot of wine mixed in. I think there’s some good information in there, but also it’s a book that’ll make you laugh; it’ll make you cry. And that’s why they should buy it. Because who hasn’t laughed and cried while drinking wine?

You can catch Dunn at these upcoming signings: