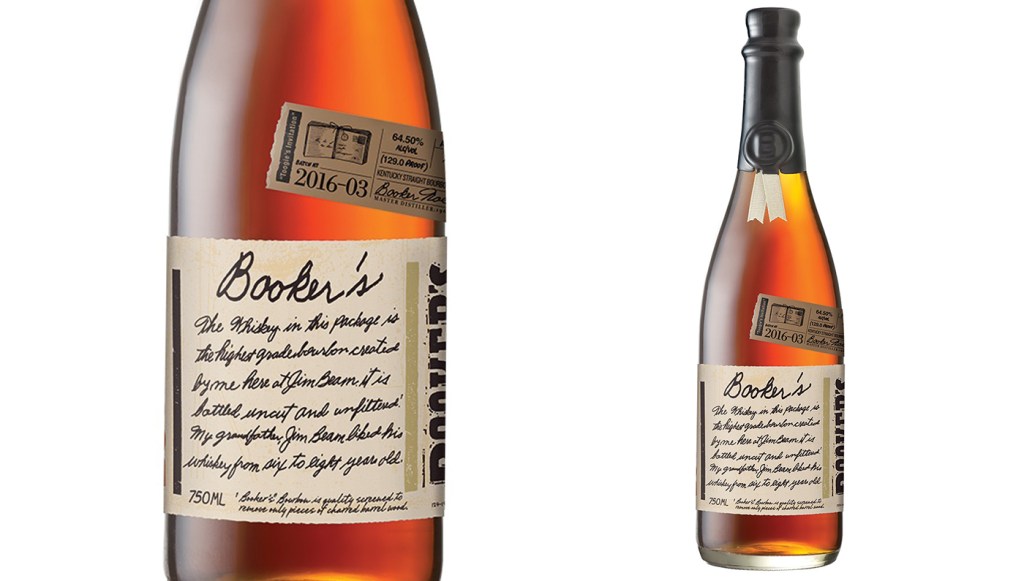 It’s not quite knighthood, but membership in the Bourbon Roundtable is a pretty big deal for a whiskey writer. Our King Arthur is Jim Beam’s master distiller Fred Noe, who convenes the roundtable—a group of seven core members, with others occasionally added—a couple times a year, by phone or in person. Our quest: to taste samples of Booker’s Bourbon and choose which one should be bottled as an upcoming batch. You see, the process of making bourbon is a lot more complicated and involves a lot more variables than you might think. The aging part of the equation is the trickiest. It’s not just a matter of how long a barrel sits in the warehouse. Where it resides—a higher or lower floor, for instance—makes a huge difference in the amount of evaporation (known as the “angel’s share”) that occurs, which affects both the flavor and the proof of the final product. Two barrels of bourbon distilled together and using the exact same grain, yeast, and water can taste completely distinct from each other if they were aged for the same amount of time but in different parts of the same warehouse.

Booker’s Bourbon is made in small batches around six times a year and bottled at cask strength. Quality-control specialist Teresa Wittemer helps to create a few different batch samples based on Fred’s specifications around which barrels he would like to pull, and Fred normally picks the final composite to be bottled, based on Booker Noe’s personal whiskey preference for a robust and full-bodied whiskey. Fred is the son of Booker Noe, who created Booker’s and is credited for coining the term small batch bourbon back in the early ’90s. The Bourbon Roundtable consists of spirits writers who have earned Fred’s trust to help select a bourbon worth bottling as Booker’s. We don’t get paid for our efforts, but we get to eat good food, drink good whiskey, and hang out with Fred.

Tonight is a special treat. Not only are four of the roundtable members in Kentucky, but we’re sitting in the famed Kurtz Restaurant, where longtime family friend Marilyn “Toogie” Dick makes her legendary country ham and fried chicken. Each batch of Booker’s is individually numbered, but lately they’ve been named, too. Batch 2016-03, made from about 375 barrels, is called Toogie’s Invitation, and its namesake is on hand to taste with us as the guest of honor this evening. Also joining the party are Wittemer; Fred’s son Freddie, a special projects manager at the Jim Beam Distillery; and Craig Weiter, from the Kentucky sales team.

Fred starts off by telling us about Toogie and her late husband, Don: “The story has it that Dad and Don made a pact that if something happened to one or the other, the other would step up and take care of the other one’s family. That’s how close they were. Don fell ill to pancreatitis and passed away at the age of 38. It was tough on Booker, but he stepped up. He was a father figure to all of Toogie’s five children.”

“When Dad started traveling, it took two women to get Booker to events on time, so Toogie would travel with Mom and Dad. She was part of the family. She was there when Dad selected probably every batch of Booker’s that he ever did, up in the kitchen. So when the idea came to put her down as one of the batch names, it was rightfully just.”

A glass bottle containing Sample A is passed around the table and poured, and Fred starts telling us about it, explaining that it contains a mixture of whiskey with three different production dates, stored in four different locations. “Thirteen percent came from a batch that’s 7 years, 5 months, 4 days old; it came off the seventh floor of a nine-story house. The second part is 10 percent; that came from the same production date; it was on the fifth floor of the same nine-story house. So it was actually the same date, got put in two different spots,” he tells us. “Forty-four percent is 7 years, 3 months, 5 days old; it came off the sixth floor of one of our brand-new, seven-story rack houses. One of those new-style, seven-story houses holds 50,000 barrels. Then, the last of the production dates is 6 years, 3 months, 27 days old; it’s 33 percent. And this one came from the seventh floor of one of the old nine-story houses. That’s our Sample A. The strength of it is on the bottle: 130.755. That’s the composite proof of all these put together.”

There’s silence but for a bit of lip-smacking as we all sip, savor, and contemplate. The process is repeated for the next two whiskeys, with Fred telling us the particulars of each one while the roundtable is sipping and listening.

The conversation turns into an impromptu lesson on aging whiskey. Barrels for Booker’s, Fred says, often come from the middle floors of a warehouse, as per Booker Noe’s preferences. According to Fred, the temperature and the airflow in the middle floors give the bourbon its distinct characteristics. But, of course, the most important factor is time. “I think time helps the oxidation, the angel’s share, all the little things that come into play, to give it the flavor,” he says. “I mean, the angel’s share, that’s something we never really put our finger on either—how much that contributes to the taste. You know, evaporating, you’re concentrating the flavor of what’s left. You’ve lost, say, 30 percent; you’ve only got 70 percent left, but what’s left is more concentrated.”

A consensus slowly emerges as we sip: Sample A, my favorite, is dry, slightly funky, almost meaty; C is smooth and on the sweet and fruity side; and B tastes the most like what we expect from Booker’s—robust and spicy, with lots of vanilla, caramel, and oak. Our conundrum: Do we vote for consistency? Or for our personal tastes? Fred says, “I could live with all three of ’em.”

I concur, thinking there’s no wrong choice, with the downside being that two delicious whiskeys won’t be bottled. “They’ll be back out in the next [batch],” Fred says. “We don’t throw anything out.”

We all take a scrap of paper, write down our choices, and stuff them in a bottle as we adjourn to the bar for some Booker’s cocktails.

In the end, it turns out that we let our consciences guide our votes: Sample B, generally hailed as the most quintessentially Booker’s-like of the three, is the winner. The roundtable may have the liberty to take whatever we want and put it in a Booker’s bottle, but we feel a responsibility to the people who love Booker’s not to rock the boat too much. Whiskeyphiles who want to experience a little of our night in Bardstown can pick up a bottle of Toogie’s Invitation, also known as Batch 2016-03, while it lasts. It is available beginning this month. (bookersbourbon.com)