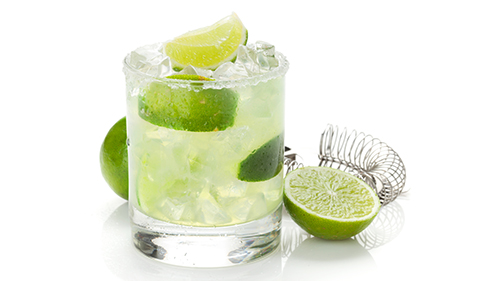 The word “margarita” doesn’t technically mean party, but it might as well.

Imagine this: A grizzled man, clearly down on his luck, walks into a dim and dingy bar. He slumps down into a barstool, the dark emotional weight he brought in with him settling over the whole room like a storm cloud. “Bartender,” he grumbles, “Can I have a margarita?”

There are lots of emotions that can lead a person to drink, but only one emotion that leads them to drink margaritas, and that’s exuberance. Margaritas are here to have a great time. More than perhaps any other cocktail, they represent the spirit of unfussy joie de vie that acknowledges the potential for fun in any situation. That tiny voice in you that, from time to time, urges you to be a little irresponsible? That voice drinks margaritas.

It’s as good a symbol as any of what we’ve lost in the Covid shutdown, which makes it an act of happy defiance to make them at home. Fortunately for all of us, margaritas are supremely agreeable. A little too sweet or sour, still good. A little too strong or weak, same. As long as you follow a few basic guidelines, you’ll be the envy of your Zoom chat in no time.

But first, however, you’ll have to navigate our only hard choice of the day, a fork in the road. There are two margaritas, and they’re both good, and I can’t choose for you: the classic or the upstart.

It’s traditional to add a bit of orange liqueur (the cocktail’s father, a daisy, is a sour sweetened with orange liqueur, and “margarita” is Spanish for “daisy”). The problem here is that bad triple-secs are really bad, and great triple-secs are all around 80 proof, which gives us something both disarmingly tasty and perniciously strong.

Created in the early 1990s by Julio Bermejo at Tommy’s Mexican Restaurant (a San Francisco staple since 1965), this is simplicity itself. Cut out the Cointreau and balance for sweetness. This is a more accessible and lower-proof cocktail, one that is more accommodating of the idea that drinking margaritas, like eating Cheez-Its or falling in love, is hard to stop once you’ve started.

For both: Add ingredients to shaking tin, or blender, with lots of ice. Shake, or blend, until ice cold. Pour into a glass, garnish with a bright slice of lime, and indulge.

The most important, absolute deal-breaker is that your tequila needs to be 100 percent agave. If it is, it will say so on the label. This means that it’s made exclusively from the Blue Weber agave plant, as it is supposed to be. If it doesn’t say this (looking at you, Cuervo Gold) it’s fermented from 51 percent agave and 49 percent industrial sugar syrup, and is gross, and you should give away the bottle to someone you don’t like.

Beyond that rule, we drift into personal taste territory. For margaritas, I prefer a blanco (sometimes called “silver”), which is unaged—you get all the flavor from the agave and the earth. A high quality joven, like one from Casa Dragones, can also work. Reposado tequilas introduce a little oak aging, and will blunt the bright rawness of the agave with vanilla and cinnamon tones. Añejo even more so.

As for brands: After more than a decade of professional bartending, I’ve come to prefer the budget side of the spectrum for margaritas. Cimarron, Lunazul, Olmeca Altos and Milagro are all great Margarita tequilas. I also love top-shelf, expressive blancos, but usually for sipping—too much character actually distracts from what’s great about margaritas, which to me is their snappy refreshment.

RELATED: The 20 Best Tequilas You Can Buy Right Now

Get fresh limes, and a decent hand juicer ($15). If you can’t, pasteurized lime juice works in a pinch. Honestly lemon juice would be OK too, but the long, malic, zesty finish of limes is really the star here. In either case, anything is better than the plastic bottled, 0 percent juice, neon, high-fructose margarita mixes, which pair best with microwave TV dinners and a prefrontal lobotomy.

Agave nectar is the ideal sweetener, and is worth the small effort to get. If you’re making drinks at scale, turn it into a syrup by stirring two parts agave nectar with one part warm water until they’re integrated. It’s also easier to work with than the straight nectar—less clingy, and requires less precision. That being said, it’s not strictly necessary. (Note: Recipes above are based on the syrup, not the nectar.)

If you’re using one, you want it vodka-based (triple-sec) rather than brandy based (curaçao). Curçaos like Grand Marnier aren’t bad here, but the goal is vibrancy, and Cognac’s oak and vanilla add mellow rather than vibrant notes.

Cointreau is the gold standard of triple-sec, clean and bright as a laser. Combier is also excellent. As for other triple-secs, the quality declines as rapidly as the proof does. Anything below 60 proof, like that crust-sealed bottle you almost certainly have in the back of the liquor cabinet, for instance, just toss. Life’s too short.