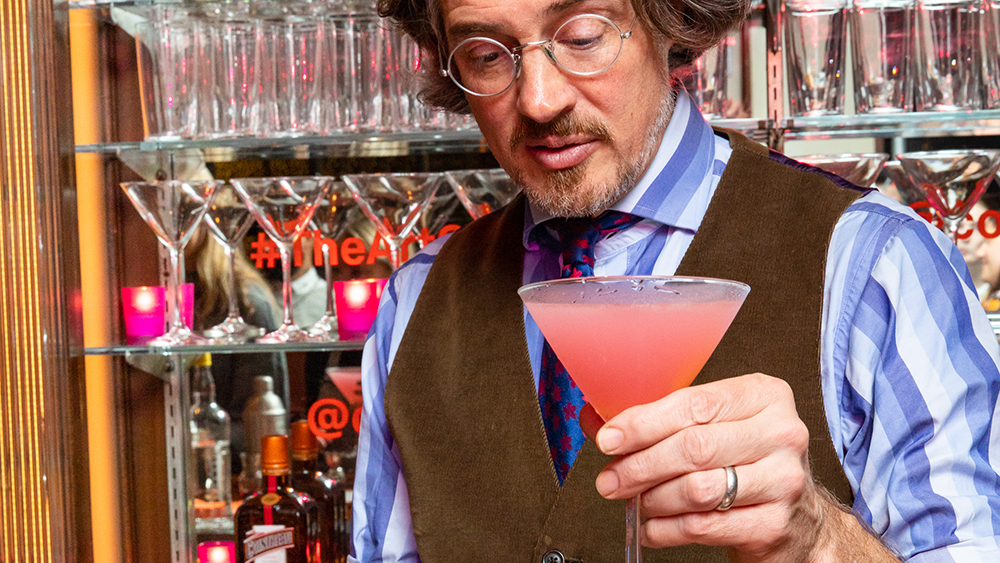 “You want a punch in the teeth of lime,” bartender Toby Cecchini says, as he pours a blush pink concoction into an iced martini glass. I sip, it’s so sour it makes my mouth pucker, and I realize I’ve been drinking Cosmopolitans wrong my whole life. Thankfully, the man who invented the drink is about to deliver a masterclass on the ‘90s favorite.

I’m gathered with a few other imbibers in Cecchini’s Brooklyn landmark, the Long Island Bar, on an otherwise average Tuesday. The effusive mixologist—who has written about spirits for The New York Times—tells us he invented the Cosmopolitan back in 1988 while working at Tribeca’s fabled bar The Odeon. Here, fellow bartender Melissa Huffsmith-Roth showed a fresh-faced Cecchini a cocktail that had become popular around San Francisco’s gay bars. This version of the Cosmopolitan was a mix of vodka, Rose’s lime and grenadine. Cecchini thought it was “super cute and pretty but disgusting,” so he decided to do his own riff. He took the name and not much else.

Cecchini replaced Rose’s lime with fresh-squeezed lime juice and added citrus vodka—the flavored spirit was all the rage at the time. He also added Cointreau—he says “it was a no brainer”—and Ocean Spray cranberry juice. He served it in a martini glass with a twist of lemon—and thus the Cosmopolitan was born. The cocktail quickly became a crowd favorite in downtown New York and Cecchini started making hundreds a night. He even recalls Madonna and her friends asking for “those pink drinks.” Then, Carrie Bradshaw and her friends started sipping the cocktail in Sex and the City and the rest is cocktail (and pop culture) history.

Whatever the reason, the Cosmopolitan has become a bastion of city drinking—but one that’s oftentimes bastardized. Perhaps this is why the bartender refers to it, lovingly, as his “albatross.” The tipple is not meant to be super saccharine or hot pink. In fact, the first thing you notice about Cecchini’s Cosmo is the color: the bubblegum pink is amiss and instead it has a much lighter hue. It’s also extremely tart, thanks to all that fresh lime.

So, how do you make it right? Cecchini says the secret to a good Cosmo is to purchase the exact ingredients. Since it’s such a simple sour there’s not much to hide behind. “It has to be this specific type of citrus vodka. It has to be Cointreau. It has to be the right cranberry juice. And it has to be fresh lime juice.”

Cecchini himself has experimented with upscale ingredients, he’s even tried infusing vodka with lemon peel, but he says it’s just not as good. “Believe it or not, this drink comes out the way that it does because of those four elements. It is the sum of its elements and I am somewhat loathe to change them because it works,” he explains.

Also key is how you mix it. You must shake it like crazy and refrain from a double strain. “I don’t double strain it because we didn’t do that back then, so it has those ice shards that keep diluting it. Now I could double strain it but this a drink of its era.”

While Cecchini talks, we’re invited to shake up our own cocktail. The event was organized in partnership with Cointreau, so there is orange liqueur aplenty. I dutifully follow his recipe—which is detailed below—and make my first proper Cosmo. It turns out delicious. Shrimp cocktails start making the rounds, A-ha’s Take on Me is blasted throughout the venue, and it’s clear that Cecchini has not only embraced his ‘80s past; he’s proud of it. And so he should be, the Cosmopolitan is one of the only craft cocktails—alongside the Espresso Martini and the Bramble—to come out of the era of big hair and endure. Cheers to that.

Pour the fresh lime juice, cranberry juice, Absolut Citron and Cointreau into a cocktail shaker. (Pro tip: Cecchini says to add ingredients in order of their price and pour the cheapest ingredient in first. That way, if you mess it up early on, you can throw it out and start again without feeling guilty.)

Shake vigorously until outside of shaker is so cold your hands sting, or about 20 seconds.

Remove the ice from martini glass.

Strain cocktail through a strainer or a slotted spoon into the martini glass.

Garnish with a twist of lemon.