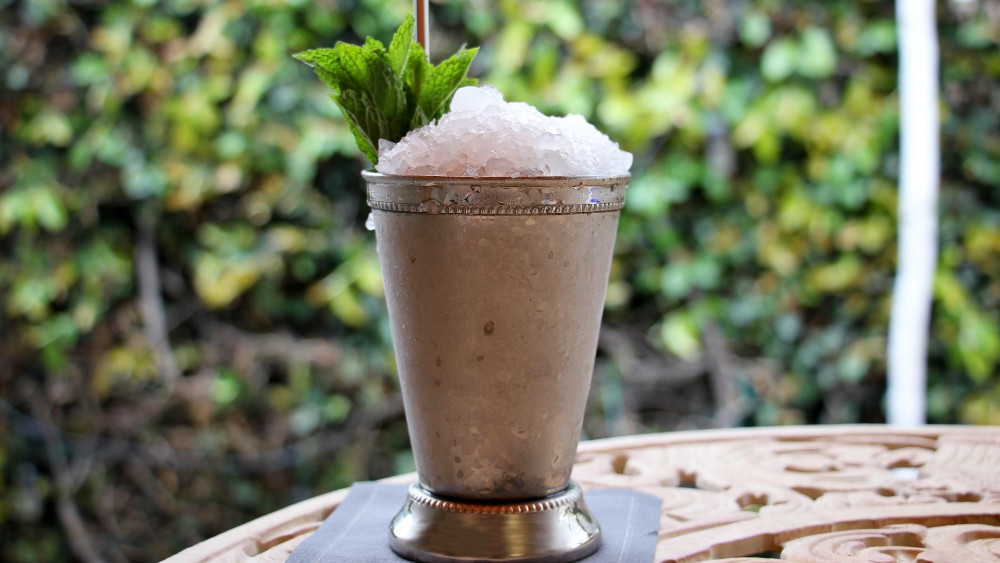 Mint juleps don’t give a damn about the rules. That much is clear to just about everybody. As a cocktail, it violates almost every drinking norm we have, so easily spanning apparent contradictions that it seems to make the impossible possible.

Take a moment to consider its achievements:

The mint julep evokes a sense of 200 years of Southern history that is almost impossibly idealized, and nobody seems to mind. It is essentially a large cup of whiskey, and yet it has been embraced by every strata of society as something that’s perfectly acceptable to enjoy several of on a Saturday afternoon. It is simultaneously exuberant and genteel, a sign of a great party and yet deeply serious, and has found favor with everyone from Teddy Roosevelt to Margaret Mitchell. The same jaded bartender who rolls his eyes at your request for a copper Moscow mule mug will not only accept but insist on a traditional pewter cup for your mint julep.

The Kentucky Derby without juleps would be shorter than a commercial break. But add in mint juleps? Suddenly it’s a multi-day event, and the thought of dressing up like a carnival barker from the 1930s seems necessary. Important even. It’s about tradition.

The 2020 Derby has been pushed back to September, but that same sense of tradition says that this is mint julep season, racehorses or no. Fortunately, with just a few easy tricks, making mint juleps at home is well within your grasp. As with all simple drinks, every little thing matters, so we’ll take the component ingredients individually—bourbon, sugar, mint, ice and barware.

The “official” Derby julep is made with Old Forester, but that’s just a corporate sponsorship. It’s a perfectly fine whiskey, but for juleps I prefer a bourbon on the sweeter, rather than spicier, end of the spectrum. Four Roses Small Batch shines exceptionally here, as do Buffalo Trace big brothers Eagle Rare or Blanton’s.

Maker’s Mark, Woodford Reserve and Buffalo Trace all also work very well. Avoid bourbons that are too oaky; double-barrel finished bourbons are overkill. For proof, aim for between 90 and 100. Lower isn’t a problem, you’ll just need to use less sugar. I’m not sure I’d go much higher than 100 proof. Too hot.

For ease and precision, make a simple syrup. Equal parts sugar and hot water, and stir. Hot water will dissolve sugar faster. This syrup will keep for a month in the fridge and couldn’t be easier. And use plain white sugar—richer, darker sugars work against the mint’s brightness.

You’ll need about 10-12 leaves of mint, reserving one (or ideally two+ crowns) for garnish. Pretty much every reputable recipe on the internet will admonish you to gently muddle the mint, warning that over muddling will release bitter chlorophyll into the drink. This is sound advice, but honestly, the warnings get a little hysterical. A light press on the mint will release brighter flavors, but if you accidentally press too hard, it’ll be fine. Aim for about as much pressure as it would take to crush a ripe raspberry. The goal is clarity of flavor, not power.

Crushed ice is pretty important here. Mint juleps taste best when they’re ice cold and well diluted. There are a few ways to do this: professionals use a dedicated ice mallet and a canvas sack called a Lewis Bag to hammer ice to order, which is surprisingly effective and you can find them for about $30 online. A clean dish towel and a rolling pin provide similar, if less elegant, services. Pulsing bigger cubes in a blender or food processor works as well. If you’d prefer to avoid violence entirely, you can likely buy crushed from a local ice company. Secret tip: Every Sonic Drive-In restaurant in the country sells 10-lb bags of pebble ice for something like $2.

A traditional julep cup is pewter or silver, and about holds 12 to 16 oz. They’re fun and inspirational in their own right (catching a glimpse of one in a cupboard is often sufficient prodding to turn any day into a julep day), but all that really matters is that it’s made of metal, which conducts the way you need it to. The base of a cocktail shaker works just fine, as long as it’s not too big. If you must use glass, put it in the freezer for 10min before making the drink. As far as juleps are concerned, cold is an ingredient.

In a metal cup, gently muddle the mint into the simple syrup. Add bourbon, and fill 2/3 with crushed ice. Stir to chill, until a frost forms on the outside. Then pack the rest of the cup with ice. Take two mint crowns, lightly bruise them with your fingers, and stick them against the inside close to the straw. Enjoy.