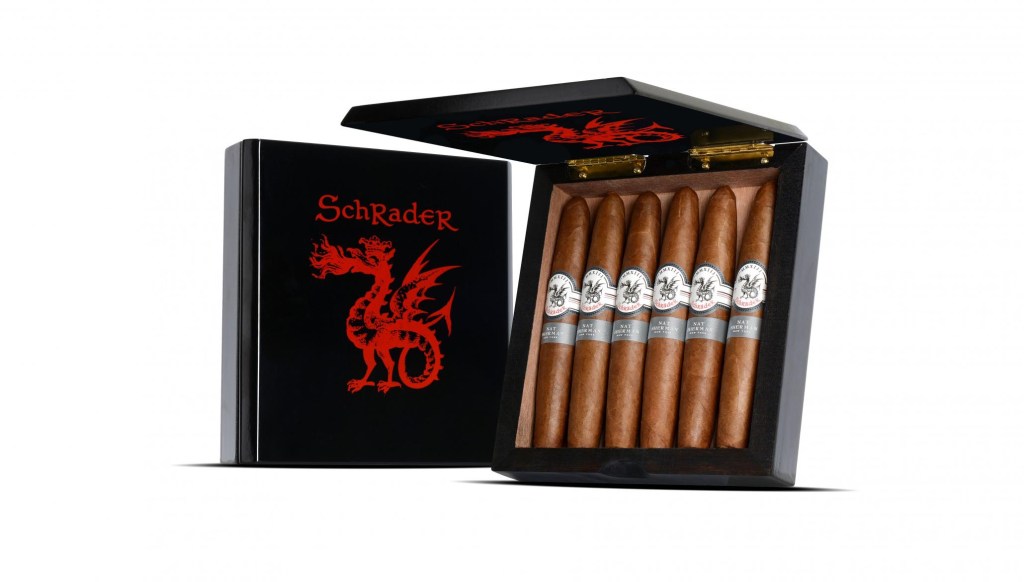 Napa Valley, CA (April 29, 2016) – Schrader Cellars, producer of iconic Napa Valley Cabernet Sauvignons, is releasing the Limited Edition Schrader MMXIII Cigar to the market.  This is the second cigar blend offered by Schrader Cellars, a stunning follow up to the inaugural Schrader Doco-Est MMIX in 2010. The Schrader MMXIII is custom crafted to Schrader’s unique specifications under the masterful guidance of Nat Sherman’s Michael Herklots at the Quesada Cigars Factory in Dominican Republic.

Fred Schrader, owner and proprietor of Schrader Cellars and cigar aficionado says, “Next to my endeavors in wine, making cigars is the most exciting challenge I have embraced. This new release Sparky cigar has been a three-year project, during which time my close friend Michael Herklots and I tried 12 different prototypes before we found what we believe to be perfection. We truly believe we have achieved an unparalleled cigar experience, balanced and satisfying. We are now proud to share our creation with our friends and as they say — the proof is in the smoke!”

“We took our time to make sure we created an experience that would appeal to both Schrader and Nat Sherman customers alike, as well as enthusiasts of great wine and cigars globally,” shared Michael Herklots, Vice President of Retail and Brand Development for Nat Sherman and a long-time friend of Schrader.  “We listened to the feedback on our first Schrader cigar, and channeled those comments into building our new blend. It’s spectacular.”

The Schrader MMXIII, affectionately called “Sparky Two”, combines filler tobaccos from Nicaragua, Peru and Dominican Republic, with a Dominican binder and wrapper.  It’s a unique ‘perfecto’ shape, at 6 inches long, with a 42 ring gauge open foot, and expanding to a 60 ring gauge center before tapering back to a 38 at the cap.  “This format provides a profound platform for development of flavor and aroma, much like how a wine can change in the glass, and throughout the bottle,” shared Herklots. The cigars were aged for 26 months in the Dominican Republic prior to release.

Packed in stunning piano black boxes of six cigars with the iconic Schrader Dragon logo, the cigars are adorned with a Schrader primary band, and a Nat Sherman secondary band.  The cigars are set to be pre-released to Schrader’s mailing list members on Tuesday May 10, 2016, and will be available at the Nat Sherman Townhouse and Authorized Nat Sherman Tobacconists beginning Monday, May 17, 2016.  2,500 six-pack boxes will be released with an offering price of $84.00 per box plus applicable taxes.

Fred Schrader, proprietor of benchmark winery Schrader Cellars in the Napa Valley has lived a life of true adventure.

Growing up in St. Petersburg, FL, Fred’s childhood consisted of racing in soapbox derbies – a hobby that quickly evolved to racing Formula Ford cars and, more recently, Aston Martins. In 2012 he achieved a spectacular podium finish at the Aston Martin Festival Le Mans in France, a high point of his racing career.

Ever the bon vivant, Fred played polo in the Dominican Republic, established himself as an avid collector and dealer in fine art and antiques, as well as developed his own line of Schrader Sparky cigars.

Fred’s greatest triumph proved to be the world of wine, a transition made when he attended his first Napa Valley Wine Auction in the early 1990’s.  Beginning with a single block of Cabernet Sauvignon grapes in the Beckstoffer To Kalon Vineyard, Fred grew his passion for wine into being the most critically acclaimed wine portfolios in American history. To date, Schrader Cabernet Sauvignons have earned a combined total of 17 perfect 100-point scores from the world’s most renowned critics.

Founded by Nat Sherman in 1930 and family-guided for three generations, Nat Sherman International continues to define the authentic tobacco experience. Through a tradition of innovation and expertly crafted products, Nat Sherman’s timeless appeal, while quintessentially New York, is embraced and enjoyed worldwide. Learn more at www.natsherman.com and follow Nat Sherman on Facebook, Twitter and Instagram at @Nat42nd.