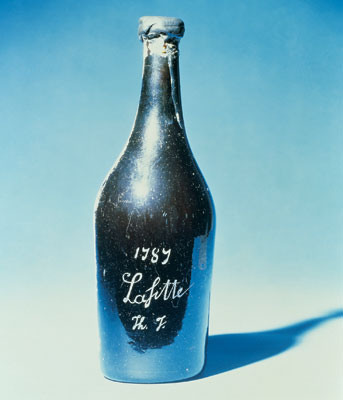 As early as the 1300s, attempts were made to classify the vineyards of France according to the quality of their wines, but not until the 1855 Exposition Universelle in Paris did wine brokers succeed in this effort. The definitive list includes 61 wines from the Médoc region grouped into five crus, the elite of which were termed the premiers crus, or First Growths. The judges deemed only four wines worthy of this list: Château Margaux, Château Latour, Château Haut-Brion, and—topping the list—Château Lafite.

Château Lafite dates to the 14th century, but it began to blossom in the 1600s. By the early 18th century, while the estate was under the management of Marquis Nicolas Alexandre de Ségur, its vintages were popularly sought at public auctions as far away as England. The property became Château Lafite Rothschild when banker Baron James de Rothschild acquired it in 1868, three months before his death. His sons Alphonse, Edmond, and Gustave guided the estate through decades of turbulence—from phylloxera to the Great Depression—always maintaining its standards of excellence. Gustave’s grandson, Baron Elie, would regain possession of the vineyards after the Nazi occupation, and his nephew, Baron Eric, is the current steward of this legendary plot of soil.

Two years before the classification, English-born Baron Nathaniel de Rothschild purchased Château Brane Mouton, which he rechristened Château Mouton Rothschild. The property did not receive First Growth status in 1855—an oversight that his great grandson, Baron Philippe, would describe as a “monstrous injustice.” From 1922 until his death in 1988, Philippe made it his life’s mission not only to perfect the estate’s wines, but to have them reclassified as First Growths. In 1973, the French government added to the list of First Growths a fifth wine, Mouton Rothschild, which Philippe’s daughter, Baroness Philippine, proudly manages.

These two estates, whose names are synonymous with beauty in wine, continue to define our perceptions of Bordeaux in particular, and fine red wine in general. Serena Sutcliffe, head of the international wine department at Sotheby’s, a Master of Wine, and one of the world’s leading authorities, discusses with Robb Report what makes these First Growths first among collectors.

What lies behind the mystique of these two châteaux?

SERENA SUTCLIFFE: To begin with, they transcend fashion; they’ve withstood the centuries. Wine, you have to remember, is an agricultural product. And the element that makes any agricultural product extraordinarily special is a wonderful site. Both Mouton and Lafite are beautifully sited in Pauillac. In this part of Bordeaux, proximity to the river Gironde is ideal for producing grapes, because of the pebbles and the gravel in the soil, as well as the drainage. And that’s what these two estates have. The character of their wines is slightly different, but the major thing they have in common is the ability to age beautifully. Lafite in particular is probably the Bordeaux wine that ages in the most extraordinary way.

The 1855 classification was not the first attempt to establish a definitive hierarchy of wines, but it has been the most successful. Why has this classification stuck with us for so long?

SS: Largely because [the Bordeaux Chamber of Commerce] got a lot of it right. It was based on the combined opinions of brokers and négociants. They based their decisions on price history. You might say it’s a bit crass, but over a very long period, certain châteaux have always fetched higher prices than other châteaux because their wines offered more consistent quality. Interestingly, the high prices did correspond to the best positions in Bordeaux. And that’s why the classification has held for so long. There are some [estates] that one might demote because they’ve diluted their holds, and others that were left out because of absentee owners. But when you look at the classification overall, it holds up. Not many institutions can claim that after 150 years.

What was the basis of the decision to reclassify Mouton?

SS: The French government and the Minister of Agriculture recognized that it had fetched the prices of the other First Growths for decades, and it was making wine at the same level. They decided that Mouton’s exclusion was a complete anomaly: No one was managing the property at the time of the classification, and so it missed out. But the intrinsic quality of the wine is so stunning, and Mouton had a record of decades of great winemaking since Baron Philippe took over in the 1920s. It was bringing the classification into disrepute not to officially recognize Mouton.

How do the signature styles of Mouton and Lafite differ for you?

SS: Because of the region and climate, they share some traits, and obviously every vintage is different. But each wine has its distinct leitmotifs. Lafite is the absolute epitome of breeding in wine: It really tastes somehow noble. It has an extraordinary scent, and it has a wonderfully long finish and a tremendous potential to age. Mouton is a kind of sensual, opulent blast: It’s all-enveloping and mouth-filling, with very black fruit. Very exciting.

Is there a particular vintage of each that stands out for you as the perfect Lafite and the perfect Mouton?

How do Baron Eric de Rothschild of Lafite and Baroness Philippine de Rothschild of Mouton differ as vintners and as entrepreneurs? What has been your impression of their philosophies of winemaking?

SS: They both desperately care about staying at the top—it’s a constant preoccupation. It’s like being a three-star Michelin chef: From the moment you get your three stars, you spend the rest of your life worrying about keeping them. When you’re making some of the greatest wines in the world, you’re constantly preoccupied with keeping them there. You accomplish this as an owner through your choice of the right team. I certainly think Eric de Rothschild has got a fabulous team; he’s got a great technical director, Charles Chevalier, and I think Lafite is on a real high. I think Mouton is, to a certain extent, in transition—I see slightly more differences between the vintages, shall we say. But in both, the quality does come out. You open the bottle 10 years after it’s been made, and from the first whiff, you know it’s a First Growth wine. Both Lafite and Mouton have made some fantastic wines recently. The 2000 and 1996 vintages hit all the buttons.