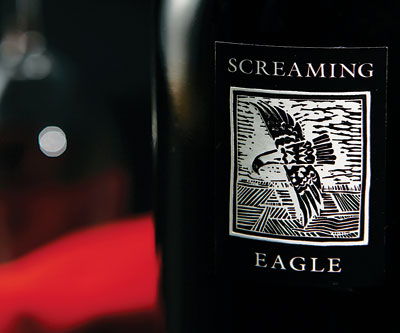 The first cult wine, presumably, was poured for the first wine cult—that of Bacchus, in Ancient Rome—and the wine (of unknown cépage, but certainly not a Cabernet) was crafted to inspire lunacy among the nymphs, maenads, and goat-hoofed satyrs in attendance. Wine was the vehicle for countless acts of antediluvian impropriety, sufficient to make the historian Livy blush: “When the wine had enflamed their minds, and the dark night and the intermingling of men and women, young and old, had smothered every feeling of modesty, depravities of every kind began to take place…”

In modern times, the word cult was first applied to wine in a 2000 Wine Spectator article, and while few of the producers associated with the phenomenon are comfortable with the term, it is apt in many ways: A cult following by definition is irrational, obsessive, fueled by things other than reason. And this elite cadre of wines is so intensely coveted that men and women, their minds inflamed, do indeed go to all manner of extremes to obtain a precious bottle.

The transubstantiation of wine to cult wine begins with desire, which is typically catalyzed by a prominent critic’s granting the wine in question a score that approaches or achieves three digits. The pulses of collectors immediately quicken, their palms itch, salivary glands activate. It does not matter to them whether they have heard of the wine, whether it has a history, a track record, or a provenance; nor does it matter that, straight from the cellar, it commands stratospheric prices, and that demand has conferred upon it instant rarity.

Collectors, in their excitement, sometimes overlook the fact that 300 cases or less of the wine may exist. In fact, they may hear rumors about the wine for years before ever encountering a bottle—and even then, it’s quite another thing to taste it. No matter. Such is the thrill of the chase.

james conaway, in his book The Far Side of Eden, notes that the rise of cult wines in the Napa Valley was heralded by three events: the arrival, in 1975, of Francis Ford Coppola to the Napa Valley, ushering in some unalloyed star power; next, the advent of the three-digit price tag, Diamond Creek’s $100 Lake Vineyard Cabernet, in 1980; and finally, Gil Nickel’s purchase of the Sullenger property in Oakville in 1998, breaking the six-figure barrier for land at $100,000 per acre. Yet this phenomenon would never have been conceivable without Joseph Phelps’ Insignia and without Opus One, the famous collaborative bottling from Baron Philippe de Rothschild and Robert Mondavi. The 1976 Paris tastings might have been Napa’s coming-out party, establishing the valley as a bastion of quality on a par with Bordeaux and Burgundy, but Opus and Insignia added an additional, essential attribute: status. These wines obliged the world to look upon Napa as the new-world source for wines of unparalleled luxury, prestige, and cachet.

Neither of these wines was scarce upon release, however, and for this reason, it is generally agreed that the first to have achieved the proper combination of quality, rarity, and expense was Grace Family, whose first vintage came in 1978. The price for this wine on its debut, $25, seems almost quaint, but Dick Grace claims it was one of the most expensive Cabernets of the time. Even so, Grace’s output was so small that its reputation remained underground until the late 1980s.It took Harlan Estate—a small-production, Bordeaux-style blend that emerged in 1984—to draw favor from the critical entity by which most boutique wines have since been measured, Robert Parker’s Wine Advocate. Parker tasted the 1992 Harlan Estate and gave it the lofty score of 96; three later vintages—1994, 1997, and 2001—each received perfect 100-point scores. Araujo, Bryant Family, Screaming Eagle, and Colgin Cellars received comparably magnanimous attention during this period, and these scores set off stampedes of demand among collectors and anointed Robert Parker as the de facto kingmaker for boutique wines—a role he continues to play to this day.

What (and who) Makes a Cult Wine?

at first glance, cult wines have little in common with one another except perhaps their rarity and price. But, in fact, they share many common threads. Nearly all of them are Cabernet-based, often blended with some softer Bordeaux varietals, such as Merlot or Cabernet Franc, to ensure that they remain fairly supple upon release. Nearly all are from Napa Valley. Many follow similar vineyard practices, including densely spaced plantings, meticulous vineyard management, and a penchant for low yields and exceptionally ripe fruit. Interestingly, these vineyards also have in common an elite coterie of winemakers, consultants, and vineyard managers who play an important role in establishing and maintaining their mystique.

While having David Abreu lay out and manage one’s vineyard, for instance, does not guarantee cult status, it does help—as it has aided Araujo, Bryant Family, Grace, and Colgin. If famed Bordeaux consultant Michel Rolland draws a breath anywhere near one’s barrels, the demand for one’s wine may skyrocket, as it has for Bryant Family, Araujo, and Harlan. Consulting winemaker Helen Turley’s name has been synonymous with rare, delicious, and expensive bottlings, and her early involvement with Bryant Family ensured its success. But Turley has plenty of company these days, including Heidi Peterson Barrett, who makes Screaming Eagle; Gary Galleron, who formerly made Grace Family; Mia Klein, who makes Dalla Valle’s Maya; and Philippe Melka, who now makes Bryant Family. Each winemaker imparts his or her stamp on these and other, newer labels, but as a rule the wines share some pretty remarkable elements—luxuriant elegance, power and depth, and seamless poise and finesse.

For all of their similarities, each of these wineries has evolved its own distinct personality, reflecting the concerns and ambitions of its owners. Dick Grace has used his winery as a vehicle for outreach, to help the underprivileged. Daphne and Bart Araujo consider themselves stewards of Eisele, the famous Cabernet vineyard they purchased, and have become proponents of organic and biodynamic farming in the process. Ann Colgin and Screaming Eagle’s Jean Phillips—arguably two of the most important women in Napa Valley—have parlayed backgrounds as an auctioneer and real estate broker, respectively, into extraordinary success. And Bill Harlan now plays a role in the cult wine fantasies of others with the Napa Valley Reserve, a private vineyard club whose members can participate in winemaking with a team assembled by Harlan Estate winemaker Bob Levy and vineyard manager Mary Hall.

This remarkable subset of Napa Valley’s premium wine producers continues to set new standards of quality for the region and the world, and the many talented individuals involved in cultivating these labels will no doubt outlive the somewhat gaudy and unattractive moniker of “cult.” Their wines certainly will.