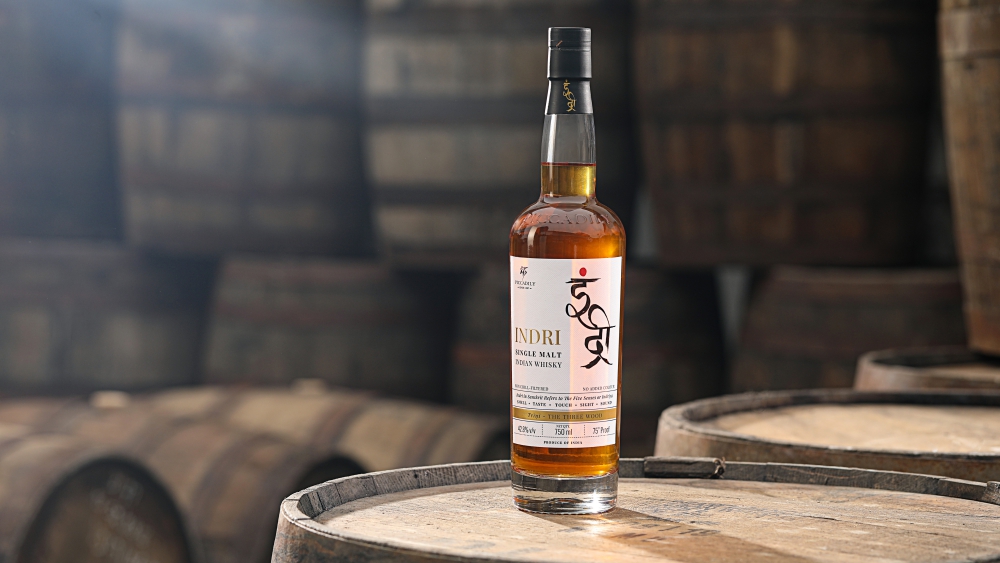 There’s a new Indian single malt just hitting the market, part of a rapidly expanding category here in the US, and it’s making a bold (in whisky terms) claim. Indri-Trini: The Three Wood is being touted as the first Indian whisky to be aged in three specific barrel types… but that might be up for debate.

Indri Single Malt is made by Piccadily Group at a distillery in the eponymous city of Indri, which is located in the Indian state of Haryana. The malt distillery has been in operation since 2012, and is said to be the largest independent distillery in India. The whisky is made from a mash bill of six-row barley grown in Rajasthan. Tasting notes include tropical fruit, burnt pineapple, citrus and raisin on the palate, and the extreme seasonal temperature shifts (ranging from 122 F in the summer to 32 F in the winter) are reasonably thought to have a big impact on the whisky as it ages.

The claim here is that this whisky is the first Indian single malt to be aged in three different types of barrels before being blended together: bourbon, French red wine and Pedro Ximenez sherry. The whisky is non-chill filtered, no color is added and it’s bottled at 46 percent ABV. However, there is another Indian single malt that appears to be aged in a very similar manner. Kamet is a new Indian whisky that was also released this year, and it too was matured in bourbon, sherry and wine casks, with some minor differences—this whisky was initially aged in bourbon and a combination of PX and Oloroso sherry casks, and then finished in red wine casks from Bordeaux.

So perhaps it’s more about semantics, and Indri’s claim to fame still stands. Surrinder Kumar is the man behind both of these whiskies, the master blender who worked for Amrut Distilleries for many years, so that could play a part in this potential crossover. You can order Indri-Trini online (SRP $55) now to try for yourself, and it will be more widely available in the coming months.