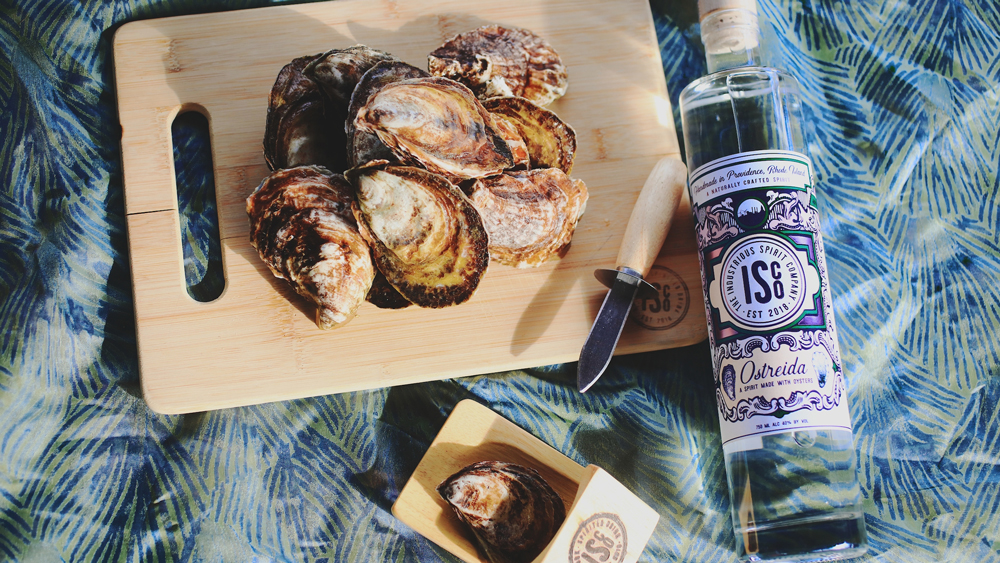 Given that the country’s smallest state is gifted with an outsize share of coastline, plus a vibrant and quirky creative economy, it was only a matter of time before someone attempted to capture Rhode Island’s seaside essence in a bottle. Enter Industrious Spirit Co. (ISCO) and Ostreida, a vodka made from oysters.

Located in an up-and-coming neighborhood of Providence that has a long industrial-arts history, ISCO was founded by Manya K. Rubinstein, a marketer and publisher, and Dan Neff, a welder and ceramicist. The state’s first distillery since Prohibition, ISCO was set to open in March 2020. As the pandemic raged, they shifted, like many craft distilleries, to making hand sanitizer and then to-go cocktails made with their flagship gin, vodka and bourbon. In July 2021, their outdoor patio opened for tastings. It was an immediate hit.

The ISCO team celebrated their first year in business at the beloved Matunuck Oyster Bar in South Kingstown. Thanks to a bolt of inspiration or the happy inhibition that comes with tippling, or maybe both, a new idea took shape. “We said to each other, ‘Oysters and vodka, what a classic combination and quintessentially coastal thing.’ We started wondering what would happen if we included oysters in our distillations,” Rubinstein says.

After about three months’ worth of experimentation with Matunuck oysters, the team finally hit on the ideal balance of a velvety premium vodka with briny minerality. Ostreida isn’t as oddball as it sounds. “Dirty martini” is the easiest flavor-profile shorthand, but it’s actually something more akin to “tide in a tumbler,” evoking Rhode Island’s nearly 400 miles of rock-strewn beaches, hushed coves, and wide-open bays.

“Because of the quality of the corn we use, it has this creamy smooth, almost round quality to it,” Rubinstein says. “On the nose, there’s a little bit of sweetness from corn and a hint of oyster. In the mouth, you get salinity and minerality mixing with this roundness and sweetness.”

While the only other oyster vodka on the market, made by a Dutch company, blends an oyster infusion and botanicals into already-distilled spirits, Ostreida is crafted from just two ingredients: organic regional corn from Stone House Grain in the upper Hudson Valley and local oysters freshly hauled from the ocean.

The corn is dried and milled specifically for ISCO, where it’s mashed and fermented on-site. Neff, the master distiller, runs multiple distillations through a 500-gal. Vendome still, followed by a long, slow proofing-down process to bring the spirits to a “less knock-your-socks-off” level. Oysters are added to the final distillation, creating a purer expression of the ingredient. The process takes nearly two months.

Ostreida’s name derives from the oyster’s Latin taxonomic order. The label is all New England fantasy, featuring a foil-printed, hand-illustrated design that, according to Rubinstein, was inspired by the iridescent colors of the interior of an oyster’s shell and Ursula the Sea Witch from The Little Mermaid.

Ostreida sells for $39.99 per bottle, and is available in limited quantities. Just how limited, Rubinstein is reluctant to say. They’re small-batch for a reason, although they’re not opposed to growing for a hit product. A portion of the proceeds from Ostreida sales benefit GreenWave, a global network of regenerative ocean farmers that’s working to create “blue economies” in coastal communities. Rubinstein says, “We try to use our spirits to have conversations with people about sustainable farming.”

A post shared by The Industrious Spirit Company (@iscospirits)

While Rubinstein prefers to sip Ostreida over ice, she notes that it works especially well in bloody Marys and martinis, including ISCO’s own proprietary version with cracked pepper, red wine vinaigrette, and a marinated cocktail onion that mimics a pearl in the glass. Her current go-to is the Friggitello, made by fat-washing the spirit with pepperoncini butter. The result is a nod to the Ocean State’s allegedly famous calamari, which found itself in the spotlight during roll call at the 2020 Democratic National Convention. (For the record: if there’s a true state food in Rhode Island, it’s the clam cake.)

As for food pairings, Rubinstein recommends salty appetizers and snacks like Manchego cheese, Castelvetrano olives, caviar with crème frâiche, and bagels with lox and cream cheese.

The instant status conferred by creating a first isn’t lost on the ISCO team. Leaving aside any cliches about the world being their oyster, they’re at work on distilling Ostreida with different varieties of oysters, including East Beach Blondes and Duxbury Standards, harvested at different times of the year, for varied flavor profiles. Labels will indicate the variety and date of harvest.

“So much of what we’re trying to do when we make these products is to tell a story, whether it’s about sustainable agriculture, a place, the hard work that went into making it, or what kind of community it comes out of. We’re trying to bottle that experience, and bring people to the ocean in an unusual way.”