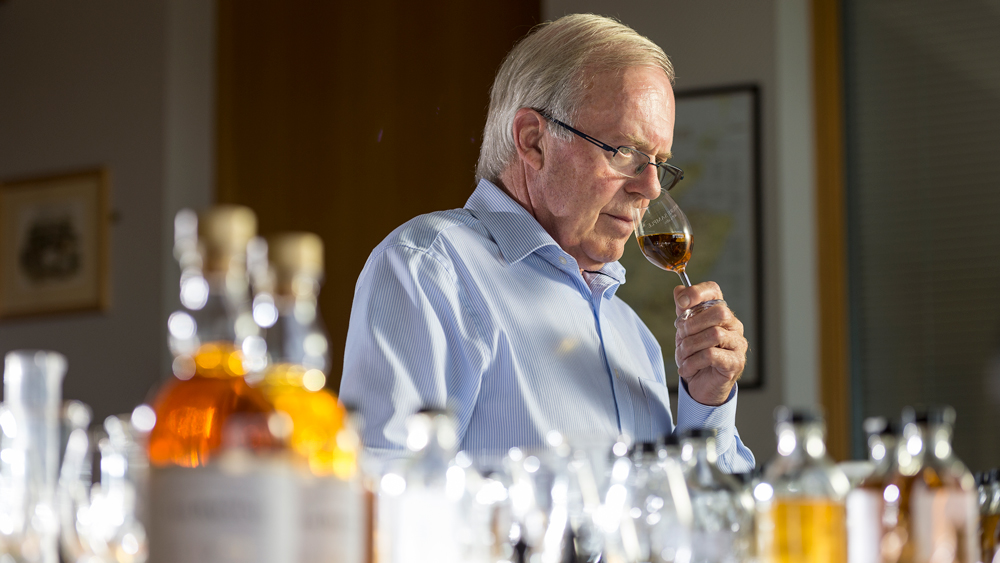 David C. Stewart started as a whisky stocks clerk at William Grant & Sons in 1962. Fifty-five years later he’s still going strong at Scotland’s largest family-owned distiller, The Balvenie. Stewart is the fifth malt master in the company’s 125-year history, and the longest-tenured malt master in the business. He’s a supremely humble and unassuming man who is regularly referred to as an “industry legend” — lofty praise he finds both flattering and over the top. But one sip from one of his DCS Compendiums—a special five-bottle collection that will be released in five set (Chapter Three is the most recent)—and it’s clear his status as a legend is well deserved.

Do you mind if we refer to you as an industry legend?

Must you? As you know, I’ve been at The Balvenie for about 55 years now, but these sorts of accolades are not something I ever anticipated when I first started out. I have been very lucky to hold this unique role in our company and in the industry. I’m proud of what I’ve accomplished over all of these years with the great help from all of my colleagues at the distillery.

There are quite a few whiskies in The Balvenie’s range. What three would you choose that best illustrate to a Scotch newcomer what the brand is all about?

There are three Balvenie expressions that would make for a nice introduction to our range, while also representing the experimentation and tradition of the distillery. The Balvenie DoubleWood 12 Year Old is the mainstay of the distillery, being the first whisky The Balvenie matured in two types of wood – American oak and European oak sherry barrels. For those that are newer to Scotch or whisky in general, we also have the Balvenie Caribbean Cask 14 Year Old, which is finished in rum casks, offers a sweeter taste, and is an approachable introduction to The Balvenie range. Lastly, a new option we’re also proud of is Peat Week, which we just released recently. While it stays true to the traditional crafts of The Balvenie, it is a new, smokier finish for those looking for an earthy dram, but with a balanced vanilla and honey finish.

The Balvenie is one of only a handful of distilleries in Scotland that still spreads and turns the grain by hand on a traditional malting floor, which is a far more costly process than automation. Why is it so important to you to maintain the traditional methods?

It’s important to maintain these traditions — home-grown barley, a malting floor, copper stills, cooperage, and my work as a malt master — because it has allowed The Balvenie to maintain quality and consistency all these years. We have indeed kept up with modern technology, and with energy savings and making the working conditions better for our employees by the use of mechanization for manual handling in our maltings and cooperage. However, we often say that if William Grant came back to The Balvenie Distillery he would find very little has changed over all of these years.

In the 1980s, you pioneered the technique of cask finishing. Today, virtually every whisky distillery in the world has cask-finished expressions in their portfolio. Over the years, have you experimented with any other unusual whisky-making methods that didn’t work out quite so well?

Casks are one of the few ways Scotch malt masters and blenders can experiment while still adhering to the integrity of the spirit. Over the years, we have experimented with everything from American oak, bourbon, and sherry barrels to rum and port casks. We’ve tried some casks that haven’t worked as well as we thought they might – each has their own intricacies, which are exciting to explore.

You started working at The Balvenie as a whisky stocks clerk in 1962, the same year another beloved UK institution — the Rolling Stones — played their very first gig. What do you find more surprising, that you’re still making whisky, or that the Stones are still making music?

I haven’t had a dull moment at The Balvenie yet – so I’d have to go with the latter! When I started at the distillery, I was still an apprentice for 12 years and didn’t become the official malt master until 1974. Since then, it’s been a new experience every day, and we’ve been able to accomplish so much.

If or when you ever leave The Balvenie, if you could take one piece of memorabilia with you — something to remember the place by — what would it be?