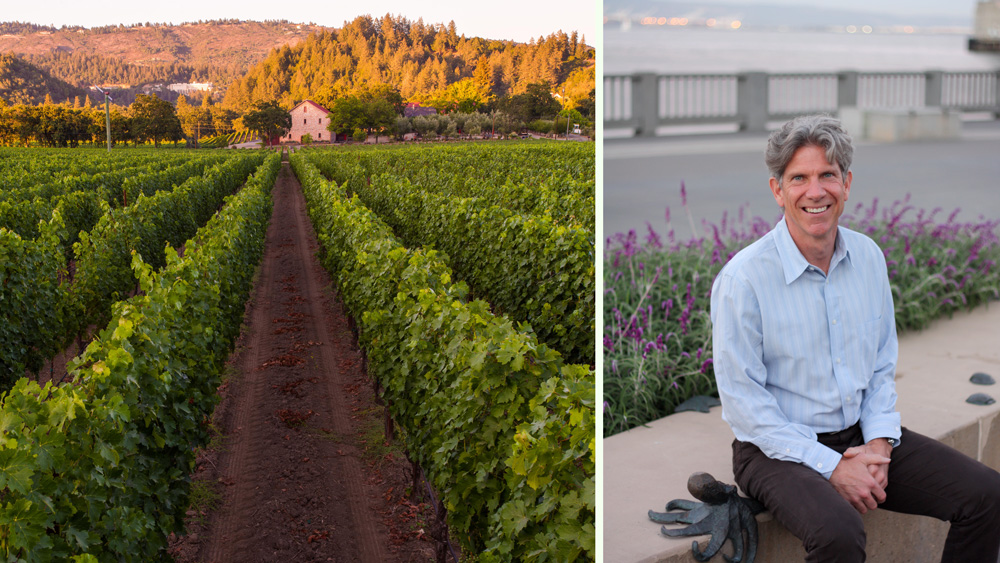 Long before he moved to the Napa Valley and settled into his current gig as the head winemaker at Ehlers Estate in St. Helena, Kevin Morrisey’s dream was to shoot major motion pictures. In the mid-1980s, that goal carried him from his hometown of Media, outside Philadelphia, to the graduate program at NYU’s elite film school. There he learned a great many lessons, not the least of which being that NYU’s elite film school is rather expensive. After accumulating a skyscraper of debt, Morrisey withdrew from the program and entered the working world, taking just about any job he could find in the film industry. He got into the union, first as an electrician, then as a cameraman. When he wasn’t shooting, he built sets, loaded trucks, worked in special effects, and laid dolly tracks for cameras, moving between Los Angeles, New York, and Paris.

After 10 years of the feast-and-famine freelancer lifestyle, Morrisey decided to re-invent himself. He’d cooked in restaurants all through high school and college, but upon intuiting that the chef’s life wasn’t for him, he turned his attention to the wine trade. After grinding through the Master’s program at UC Davis, he found the transition to running a winery a natural one. Sure, he got smacked in the head a few times along the way, but eventually he figured it out. Put it up on screen, or put it in a bottle. Make something that people will enjoy — it’s all the same.

What are some of the parallels between making movies and making wine?

It’s all about getting talented people working together and sharing a vision. You’ve got to have high quality ingredients, whether it’s a great script and actors, or vineyards and terroir. Then there’s the attention to detail, which is so important. Also many, many hours of hard work, trusting in yourself, intuition, focus, and pushing the limits. When it’s all done, the consumer is going to take it in and decide your worth. Oh, and both trades take a lot of time and money, are full of pressure, and throw great parties!

When you were in grad school at Davis, you secured an internship at Château Pétrus, one of the world’s most prestigious wineries. How did that happen?

My wife and I speak French, and we love so many things about France, so I had made up my mind that there was no way I wasn’t going to do a winemaking internship in France. I knew that Christian Moueix (Pétrus’ legendary winemaker) would sometimes take interns from UC Davis. But I applied everywhere, and drawing on my show-business education, I did what seemed natural: sent letters and resumes, followed up with phone calls, followed up again, left messages, sent faxes, followed up again, and then followed up again, then maybe again, and again. I didn’t realize that outside of the entertainment business, this type of maniacal persistence is pretty unusual. Then, just before Easter, Mr. Moueix took my call and said, “Yes, you can come to Pétrus to work harvest, but don’t call me again!” And he hung up. We had a pretty big celebration that night.

How did the experience at Pétrus inform your overall winemaking philosophy?

It was an internship, grunt work, but it was awesome. It was big league. And really super people. I don’t know what I learned precisely, but I soaked up every detail, and it’s a permanent reference in my personal encyclopedia of experience. I can still taste the wines we were making, and the grapes we were harvesting, and also all those Pomerols and St. Emilions that we were drinking at lunch and dinner every day.

You’ve described your approach to farming and winemaking as “holistic.” How so?

I guess it’s just the notion of doing things with a conscience, acknowledging that everything we do affects everything else. So when you put positive energy into your vineyards — and I don’t mean hippy dippy positive energy, although that’s okay too — I mean elbow grease, planting organic cover crops, installing bluebird boxes, sowing wildflowers to create habitat for beneficial insects, spreading organic compost, etc. It goes beyond your own land. It enriches the entire planet, along with the people who participate in it. And here I’m producing something and asking you to put it in your body, so that comes with a fair amount of responsibility. You feel good buying these wines, and you feel good sharing and drinking these wines, because of the effort and intention that goes into them. Okay, I guess I am a little hippy dippy.

Ehlers Estate is owned by a trust established by the late French entrepreneurs and philanthropists, Jean and Sylviane Leducq. Why did the Leducqs choose St. Helena, and did they leave behind a mandate on how the winery is to be run?

They chose St. Helena because there was an opportunity to purchase our awesome vineyards, which were already planted to Bordeaux varietals. They wanted to make the kind of wines that they liked to drink. It was going to be their retirement love story. The mandate for me is to operate and produce at extremely high levels of quality, but also integrity. We have high standards in everything we do. We treat our customers with kindness and grace, and we treat the land the same way. And of course we treat the employees that way, too. What will this property and company and brand be in 20 years, 50 years, 100 years? That is how Jean and Sylviane want me to inform my decision-making.

When you see a beautiful film, do you ever think, what if?

Of course. I was told that Oliver Stone almost picked me to shoot his first film, Salvador, but he went with another cool young shooter named Robert Richardson, who was a tad more qualified than me, and who has since had an amazing career. But then… if that “what if” had happened, who would be here to make these wines?

What’s the best wine you ever made? Are there any bottles left?

The Etude Heirloom Pinot Noir from 2003 is pretty amazing. Stags Leap Cabernet 2004 is a beauty. But I’d say the 2015 wines from Ehlers are the best I’ve ever made, though they’re not out yet. Maybe I’m the wrong person to ask, though. I like them all.