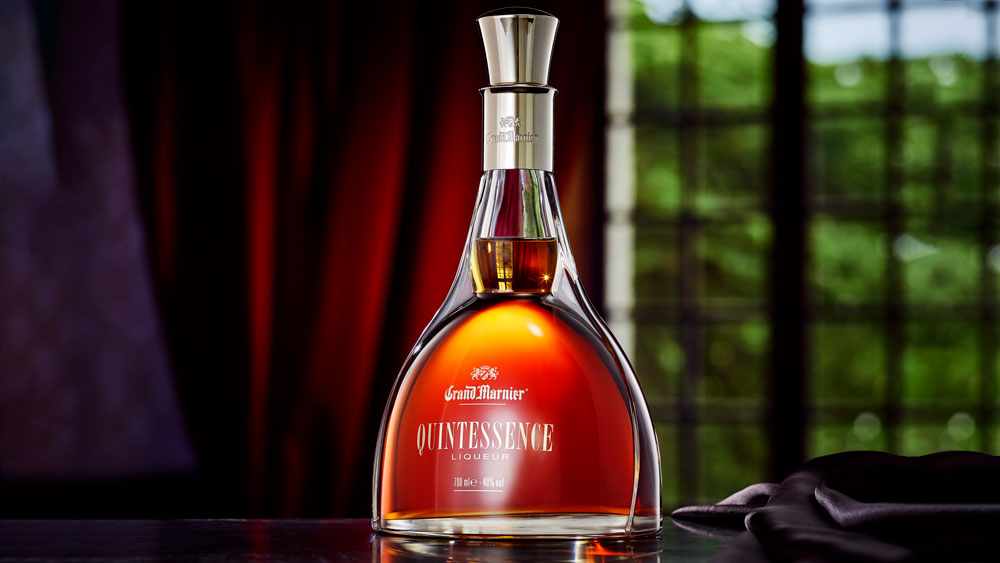 There’s orange liqueur . . . and then there’s Grand Marnier. Its cognac base, blended with macerated bitter orange peels sourced from Haiti and other Caribbean locales, has been around since 1880. The Grand Cuvée line—which includes 1880, Centenaire, and Quintessence—consists of elegant, complex liqueurs employing rare aged Cognac. In the case of Quintessence, the eaux de vie are more than 100 years old.

The entire portfolio is overseen by one man: Patrick Raguenaud, Grand Marnier’s cellar master and master blender. His family has been based in France’s Cognac region since 1627. Before landing at Grand Marnier in 2003 (and becoming master distiller in 2004), Raguenaud worked with Martell for 15 years. He has a hand in every step of the liqueur’s creation, so we asked him about what’s involved in the process—and how he likes to drink his Grand Marnier.

How have distilling and blending techniques changed since you came into the business?

To be frank, after more than 30 years in the business, I think it’s the same. We have, perhaps, some more technical knowledge—chemistry knowledge. We didn’t have that in the past. But it’s just to help us; it doesn’t change our job. Perhaps it can give us more confidence, but the base of the job remains exactly the same.

A lot of people think Grand Marnier is just for cocktails. How would you like people to consume it ideally?

Even for me, for my own choice, it’s not so easy! A cocktail is okay. Yesterday, in the evening, I drank it in a margarita. I also like to drink it with crushed ice. You put it into a snifter with crushed ice, and you drink it slowly.

How old is the Cognac used in Cordon Rouge, Grand Marnier’s flagship brand?

Up to 6 to 7 years, but the average would be around 2 years.

How is the process different for making each expression of Grand Marnier?

First, the Cognac is different. Second, the percentage of Cognac will be a little different. If you compare, for example, the Centenaire with the Cordon Rouge, you understand that with the Centenaire, the flavors are totally different. You don’t have the freshness, you don’t have the light fragrance of the oranges . . . because of the age of the cognac. So young Cognac is absolutely an obligation to maintain the freshness. With the Centenaire, [there’s] another strategy—old Cognac [about 25 years]. But the process for making the base cognac—Centenaire, 1880, Cordon Rouge—the selection of lots, the blending, adjusting, and the final product, it’s always the same.

How would you characterize the difference between Grand Marnier and a triple sec that uses a neutral spirit base?

With a neutral spirit, you don’t have the length in the mouth, which is so characteristic of the Cognac. Because of the Cognac, you can keep the flavors for a long time in your mouth. Neutral spirits, which are more simple, give too much brightness; it’s a flash.

When you make new expressions, are they your idea, or is it at the brand’s suggestion?

Both. For instance, Quintessence—it’s more my feeling and my perception. It’s not marketing strategy. I said, I think we can do something very unique. Another example—today we are looking for, perhaps, something new between Cordon Rouge and Centenaire. It’s marketing demand, you understand. So sometimes it’s a new concept coming from my side, and sometimes it’s coming from the marketing side.

Do you have a committee of tasters tasting your blends, or does it come down to you?

We have a team of four or five people who are in charge of quality control, selection of the spirit from the farmers, control of the blending, checking everything. It is my role. Usually, when we taste together, we agree. We have the same perception; we’re used to working together. But if we have a problem, at the end, my responsibility is to decide. It’s very rare, but it can happen.

How similar is the product being made today to what was made 100 years ago?

First, the formula has not changed at all. Second point, for the cognac, the way we distill the cognac is the same; the variety [of grape] is the same. So, I guess, the Cognac is the same as it has been. Third, about the oranges. I saw a photo which had been taken at the beginning of the 20th century of the bags of orange peel used at the time for making Grand Marnier. And on the bag it was a picture of Haiti. That means that from the beginning, Grand Marnier already sourced its orange peels in the Caribbean. So what does that mean? I think we can say that the quality is the same.

What’s the oldest bottle of Grand Marnier you’ve ever tasted?

I tasted a bottle that had been produced before the Second World War. One of our Cognac distillers worked for Grand Marnier, distilling Cognac for generations. One day he came to my office and said, “Patrick, I found this very old bottle in the cellar of my grandfather.” And we opened the bottle. The cork had been a little bit spoiled, but the quality seemed to be the same. You get the liqueur flavor, the orange flavor. It was very interesting!