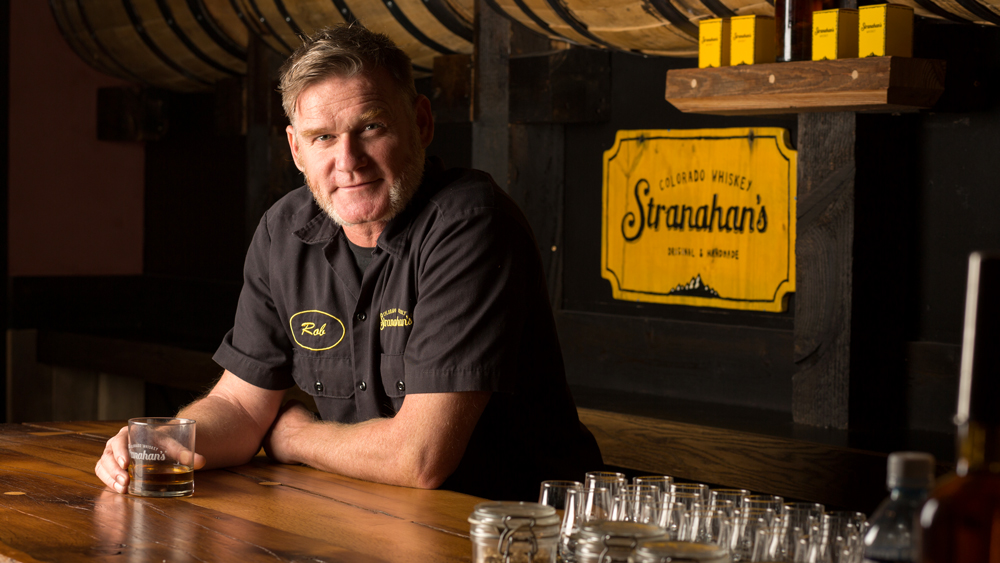 It’s all part of Rob Dietrich’s rock ’n’ roll fantasy. . . . well, almost, anyway. As a teenager growing up in Montrose, Colorado, Dietrich dreamed of touring the world with rock bands. His insatiable appetite for live music had been whet at his very first concert after high school—Depeche Mode at the world-famous Red Rocks Amphitheater outside of Denver.

After serving in the U.S. Army’s 10th Mountain Division in the early ’90s, Dietrich spent a decade working in the music business—first with Bill Graham Presents and then as a freelance booking agent for major venues across the country. He loved every minute of it.

So on a crisp evening early in November, Dietrich (now 46) was understandably over the moon to find himself headlining at Red Rocks—not as the front man for a famous band, mind you, but as the master distiller of Stranahan’s Whiskey. The Denver-based brand decided to celebrate the launch of its latest expression,Sherry Cask,in true rock-star fashion—hosting a dinner party and whiskey tasting on the stage of one of America’s most iconic concert venues. We spoke with Dietrich at the event.

How special is it for you to be showcasing your whiskey here on this stage?

Man, I got to headline Red Rocks—in my own way, of course. No audience in the stands but an audience nonetheless, right here on the stage with me. I couldn’t have asked for a more epic, full-circle experience than to launch our Sherry Cask whiskey on the same stage where I saw my first concert. Yikes! Years later, I was working with the Allman Brothers on this same stage, watching from the sidelines as Dickey Betts railed out the guitar solo for “Whipping Post.” I still get goose bumps when I hear that song.

You went from the military to the music business to making whiskey. Is there a common thread that runs through all those pursuits?

Hell yes—passion. I’ve always sought out vocations that intrigue me, regardless of the financial rewards. So at times, I had to live a little lean to be a part of something that interested me, but it always felt like I was living high on the hog. High living to me is about the thread of life—about following your dreams and helping to make them grow. I was fortunate enough to serve with an incredible unit in the military and had some extraordinary adventures with them all over the globe. Then I got to take those combat-tour experiences [in Somalia] and roll with the controlled chaos of the music industry. It was the right transition for me, in that time and place. Music biz to whiskey biz was also a perfectly natural transition—one that I found utilized a lot of what I had learned from managing soldiers to managing stagehands, venues, and tours.

When it comes to crafting whiskey—getting it to the point where it’s exactly what you want it to be—how much of that process is technical/scientific versus instinct?

It takes a fundamental base of knowledge to key into how our mashing, fermenting, and distilling systems are functioning and how to get the same high-quality results every time. Once you have picked up on that knowledge, your distiller’s instincts kick in. For example, you learn to get the distiller’s ear: the sounds each piece of equipment makes and the timing of the sounds. Each of those is important. You become finely tuned with your environment, so in a way, I would call that instinct. But fundamental knowledge is key.

How does Stranahan’s Sherry Cask expression differ from the original whiskey?

The original Stranahan’s is a marriage of our American single-malt whiskey, aged 2, 3, 4, and 5 years in new American oak barrels. The flavor profile provides a unique, oaky maltiness that is pleasantly smooth for being 94 proof. For the Sherry Cask expression, we take our 4-year-aged single-malt whiskey and transfer it to 500-liter Oloroso sherry barrels to finish. The barrels are from the Andalusia region of southwestern Spain, also known as the Sherry Triangle, where they’ve been Solera-aging sherry wine in them for more than 40 years, leaving behind a depth of flavor soaked into the oak staves. The resulting whiskey from these barrels has a rich depth of malt, with overtones of the sherry. I’ve been referring to it as the dessert whiskey to your after-dinner whiskey.

What aspects of training or military life have helped you succeed as a master distiller?

It’s always about the discipline. You’ve got to show up, you’ve got to do the work, and you’ve got to get the job done. It doesn’t hurt to have a little empathy along the way, too. Otherwise, what’s the point? You have to believe in what you do and why you do it. The military helped me to focus and organize my life in a way that makes things a lot more efficient. After having served on combat tours, I came home with the mind-set that after experiencing that, I could accomplish anything I wanted to.

Okay. You’re being sent as an emissary to some faraway land. Your mission is to sell people on the notion that American whiskey is the finest in the world. In addition to Stranahan’s, what other whiskies are you taking with you?

There is no other whiskey. I’d just bring my juice because my crew and I made it. Nothing like a personalized, handmade gift, right? It’s easiest to talk about what you make because you have the most insight on it. But as an emissary, I would also bring them some Willie Nelson and Waylon Jennings cassette tapes—with a Walkman and extra batteries—some reruns of Northern Exposure, and several jars of homemade chili. I’d throw on Waylon, heat up the chili, and dole out heavy pours of Stranahan’s and talk everything American. I’d probably have to start with explaining why we call football “football” and go from there.

Stranahan’s comprises four components—barley, yeast, water, and wood. Of those, which one would you say is most essential to the whiskey’s flavor profile?

Each one is so important. Our whiskey may be made up of only four components, but how each of them interacts makes all the difference in whether the whiskey will be great, just good, or a rotgut whiskey. Our goal is to always make not just any whiskey but great whiskey, and that takes the best barley, the healthiest yeast, the finest water, and access to well-made barrels. Much of our barley is grown in Colorado, in the San Luis and Uncompahgre valleys, and because of our high-desert environment and the long, warm days and cold nights, the barley is in the perfect element to create the starches needed to make the tastiest fermentable sugars to turn into alcohol.

The water is, of course, just as important. If we were making our whiskey with swamp water, then it would taste like swamp water. The point of distillation is to take the essence of a flavor and refine it down to its purest form. That is why we use Rocky Mountain spring water. Not only is it in our backyard, it is snowmelt flowing down into the fissures of the mountains and one of the purest sources of water that you could ask for. And, of course, once we’ve mashed and fermented and distilled with the finest ingredients we can source locally, we transfer that distilled barley spirit into white American oak barrels with a No. 3 char. That’s where the rest of the magic happens. It’s amazing what flavors will impart from the barrel. When you char the oak in a barrel, all the natural tannins, vanillins, and sugars in the wood will rise to that burn surface to form a caramelized band of natural flavors that will make up almost 50 to 60 percent of the flavor of the whiskey.