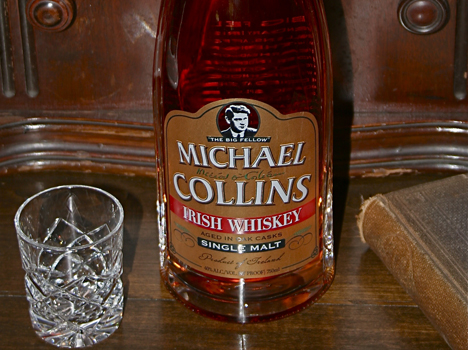 Not all Irish whiskeys are blends, just as not all single malts come from Scotland. One of the most virile examples of this is Michael Collins Single Malt Irish Whiskey ($40), named after Ireland’s equally virile patriot who helped author the treaty that gave Ireland its independence from Great Britain in 1921. As noted on the label that bears his image and signature, Collins was known as “The Big Fellow,” and this is indeed a big whiskey.  And like Collins, it defies tradition. Most Irish whiskies are triple distilled and unpeated, but Michael Collins Single Malt is double distilled, which gives it a robust character, and uses lightly peated malted barley, which endows it with a gentle smokiness. Copper-pot distilled by Ireland’s last independently owned distillery, the whiskey is aged in oak ex-bourbon barrels for 8 to 12 years.  The result is a rich, smoked fruitiness, with an undercurrent of apples and citrus and a hint of chocolate. This is one Irish whiskey that belongs in a snifter – with or without ice. (www.michaelcollinswhiskey.com)