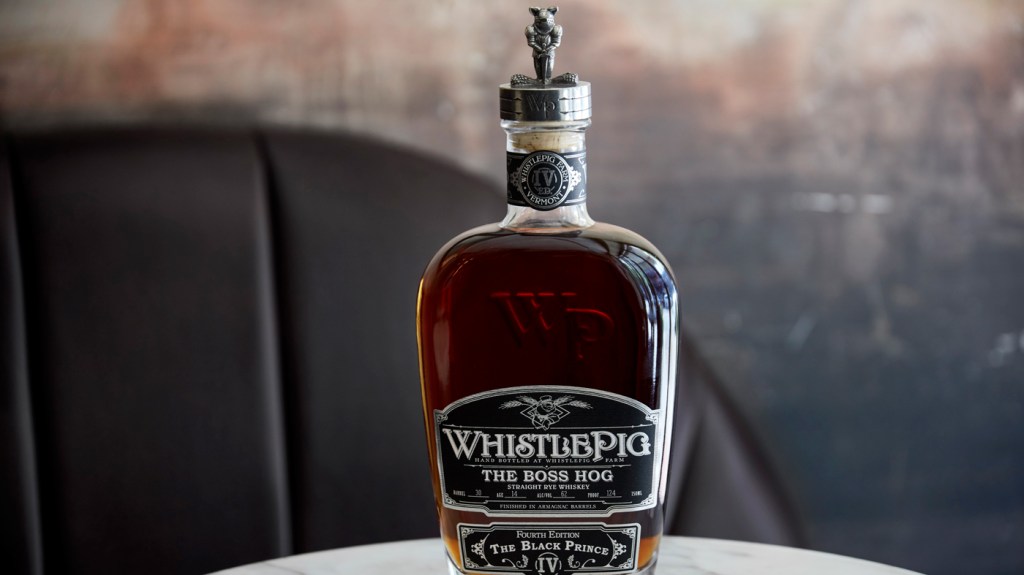 Given enough time, Goliaths in any industry will be felled by their respective David’s—young and underestimated outliers that refuse to be intimidated and stun the big guns with an unlikely upset. Such a showdown is currently transpiring in the realm of whiskey. In April, Boss Hog: The Black Prince from Vermont-based WhistlePig was named Best in Show for whiskey at a blind tasting held during the 2017 San Francisco World Spirits Competition.

The result was the proverbial stone that, at least according to WhistlePig’s founder Raj Peter Bhakta, could signal the demise of European dominance when it comes to the expression.

“Scotland doesn’t see us coming,” says Bhakta. “I see the sun setting on their single-malt empire and a very rapid rise for the Americans, particularly in rye, with WhistlePig leading the charge.”

With its launch announced today, the Black Prince retails at $499 per bottle and is being distributed in extremely limited amounts and at undisclosed locations in the United States. The fourth edition in the 10-year-old brand’s signature Boss Hog collection, it’s a straight rye that has been aged 14 years (initially at Midwest Grain Products of Indiana) and bottled at barrel strength. But what makes the distillate so distinctive is that it’s the first rye to ever be finished in casks formerly used to age the French brandy Armagnac.

“Each Boss Hog has its own story and is part of our vast experimental barrel-aging program—probably the biggest in the industry,” explains Bhakta. “We have taken what we think are the best aged stocks of various other spirits from Hungary, Portugal, Spain, and now France, and we age our great, bold American rye in those barrels.”

Armagnac’s long-standing allure can be traced as far back as the 14th-century and England’s Prince Edward of Woodstock, dubbed “the Black Prince.” During his Forays into France he plundered many of the region’s most valued possessions including the best Armagnac barrels.

According to WhistlePig’s master distiller Dave Pickerell, the Armagnac-accented oak contributes to the Black Prince being redolent with notes of apricot, fig, and plum on the nose, complemented by toasted almonds, baked apple, and allspice. Predominant on the palate are apricot, clove, and cinnamon, with hints of citrus and black tea. The finish, which seems to linger like the longing for a lost love, comforts with traces of toasted marshmallows, burnt sugar, and dried fruit.

“It’s got the boldness of rye, the smoothness of age, and a deep character that you’ll never find in another whiskey anywhere you look,” says Bhakta, brimming with the pride of a new father. “It’s something extraordinary.”

Capping off the contents is the bottle stopper featuring brand mascot Mortimer, a favorite pig that died in an unfortunate breeding accident. To match the theme of the Black Prince, Mortimer is arrayed in chain-mail armor, with each fanciful figurine and base handcrafted by Danforth Pewter out of Middlebury, Vt.

The latest release follows WhistlePig’s FarmStock, Crop 1 rye touted as the world’s first triple-terroir expression as the many of the key ingredients all came directly from WhistlePig’s 500-acre farm in Shoreham.  It’s a process powered by what Bhakta refers to as the “new luxury,” his perception of the new direction in up-market consumerism.

“It’s about getting dirt under our finger nails,” explains Bhakta.  For a long time, luxury has meant the opposite. We, however, grow our own grain, tap our own wells for the water, and harvest our own tress for the barrels. I think the whole paradigm is flipping on its head with seismic shifts in consumer taste, and we are a zeitgeist brand.”

It’s a sentiment echoed by celebrity chef and restaurateur Andy Husbands of the Smoke Shop restaurant in Cambridge, Mass. “The Smoke Shop has New England’s largest selection of American whiskey’s and rye,” says Husbands. “WhistlePig is in the center of our top shelf as they represent our values of craft, technique, and quality.”

Bhakta recently invited Robb Report to visit the farm, experience the land first hand, and exclusively sample the Black Prince before it premieres to the public. Following an afternoon spent in the distillery and four-wheeling through the fields, WhistlePig’s founder and I take refuge from a summer thundershower in the shelter of a Moroccan-themed yurt on the property. We pull a few pours of the Black Prince and fall easily into eclectic conversation, finding common ground by way of a most uncommon spirit. It’s a moment that seems to mirror Bhakta’s bead on the new luxury.

“People who have the resources want to know the product’s process—who made it and how they made it. Savvy consumers want to be a part of the story,” says Bhakta. “At WhistlePig, we’re bringing character back to consumption.” After my time on the farm touring and tasting, I now understand that’s an understatement.