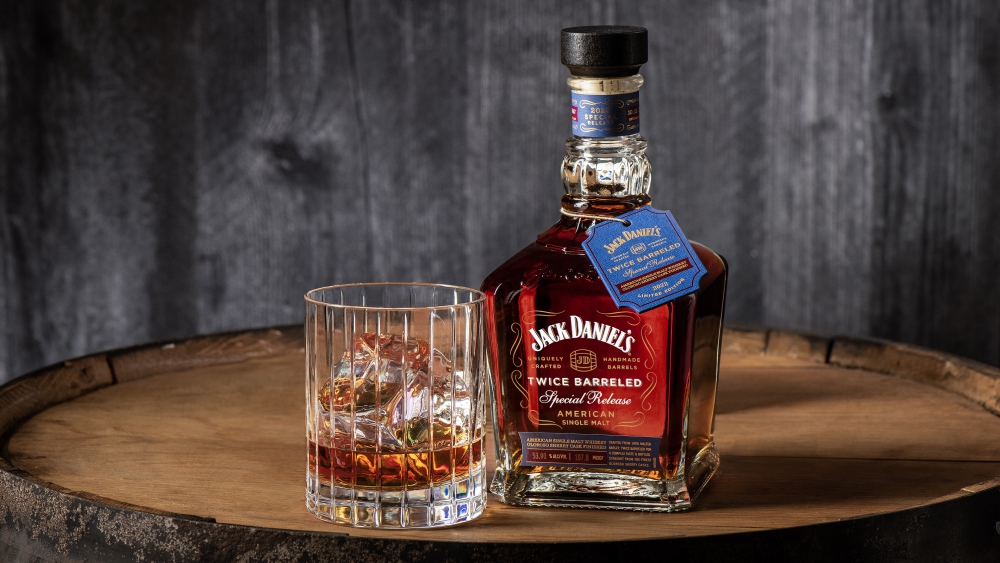 It comes as no surprise that some big whiskey brands were anticipating the recent news that the American single malt category will likely soon be officially recognized. So in a move that continues the recent expansion beyond Old No. 7, Jack Daniel’s just announced the launch of its new sherry-cask finished single malt.

We teased this news a few months ago, but the details were scarce at the time. Now we have much more to share about the new (and loquaciously named) Jack Daniel’s Twice Barreled Special Release American Single Malt Finished in Oloroso Sherry Casks. What this whiskey actually is is kind of laid out in that title—a single malt whiskey (made from 100 percent malted barley at one distillery) that was aged for a minimum of four years in new charred American oak barrels and then given a secondary maturation for an additional two years in Spanish Oloroso sherry casks from the Antonio Paez Lobato Cooperage. Like the other whiskey made at Jack Daniel’s, it’s charcoal mellowed before barreling, also known as the Lincoln County process. Finally, the new whiskey is bottled at cask strength, with the proof ranging from 106.1 to 107.8 depending on the bottle.

“Our Special Release series highlights our ongoing innovations and exceptional whiskeys from the Jack Daniel Distillery, and I’m excited to share this expression as our team set out to craft an American Single Malt that’s uniquely Jack Daniel’s,” said Jack Daniel’s master distiller Chris Fletcher in a statement. “The combination of maturing in oak barrels and finishing in sherry casks produces incredible complexity and provides a full-bodied and sophisticated whiskey experience. We’ve never crafted a whiskey like this in Lynchburg and can’t wait to share it with our friends.”

We had a chance to try it recently, and can report back that it’s a very interesting whiskey and unlike anything Jack Daniel’s has released before. Don’t expect anything close to Old No. 7 here, which makes sense given the entirely different mash bill and extensive finishing period. Perhaps there’s a touch of banana and chocolate that you might recognize from regular Jack, likely due to the use of the same yeast strain, but this is a verifiable sherry bomb. That chocolate note is surrounded by some tart tannic notes, young wood, and bunches of ripe red, blue and blackberries. On the finish, there’s dark chocolate, a bit of maltiness and a touch of roasted espresso beans. But the sherry finish is the star here, so if that’s not your preferred flavor profile this might not be the whiskey for you.

The new Special Release American Single Malt will be available this month for $70—but note, this comes in smaller 700-ml sized bottles as opposed to the 750-ml bottles Americans are used to (thanks to a TTB ruling from a few years ago). Jim Beam, Buffalo Trace and Wild Turkey, it’s your move now—we’re waiting for your take on the American single malt category as well, so step it up.