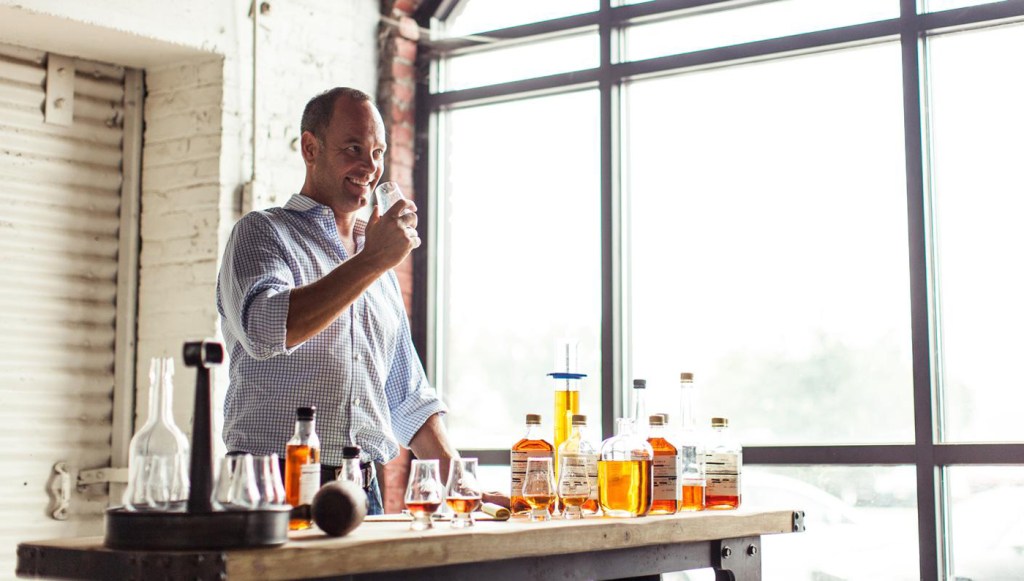 Louisville, Kentucky born-and-raised Trey Zoeller co-founded Jefferson’s Bourbon in 1997 along with his father, Chet, a bourbon historian. As if that heritage weren’t enough to anoint him official whiskey royalty, his family’s involvement with the business stretches back eight generations. While he was in our offices recently, we chatted with him about Jefferson’s most recent releases and asked for his Thoughts on Taste.

So, your father was a bourbon historian and you started this company with him 20 years ago. What’s the story behind the founding of the company?

My family has been around Kentucky long enough that everybody is involved with the bourbon industry in some way, shape, or form. Recently a book just came out by Fred Minnick called Whiskey Women, and we found that my eighth-generation grandmother was arrested for moonshining and bootlegging—that’s the oldest documentation of a woman involved in the whiskey business in America, so that was kind of fun. And my grandmother, we would go to her house, and she doesn’t ask you what you want to drink, she asks you, “How do you take your bourbon?” And everything she cooked was with bourbon. There’s a lot of bourbon heritage that’s a lot of innately in my family.

But when I got into it, the industry was in a 30-year decline. It was the worst time to get into an industry. But the reason I did that was, because of that decline, there was a great inventory of great old bourbons that were just sitting there, evaporating off into nothing or being blended into a four-year-old bourbon. For instance, Rebel Yell had 11-year-old bourbon that they were selling for $4.99 a bottle. Great juice in these products that were just not being showcased. I knew about these bourbons, and I wanted to buy them and showcase them and bring them to the market. I did, but nobody cared about it. I couldn’t give it away. But as I came out with a Jefferson and a Jefferson’s Reserve, a Sam Houston, different recipes of great bourbons, I kept getting offers to buy 600 barrels of a 15-year-old; 400 barrels of a 17-year-old—great juice but not enough to start another line. So I started playing around with them and marrying them together. For our Jefferson and Jefferson’s Reserve, about three years into it, we started marrying three or four different recipes to get more balance and complexity within each bottle. So now we have 11 different bottlings, and with the exception of our Presidential line, I do something different with each one of them, based on the maturation process and how we can manipulate that. The science of the distillate has been perfected over the last 150 years; most distillers will tell you that 75 to 85 percent of what bourbon is, the heart and soul of bourbon, comes from the maturation process. So we’d buy old bourbon and young bourbon; I have new distillate made to my recipe, and we have a distillery and we’re making our own bourbon now; and we take that and push the boundaries and definitions of what bourbon is, to get different finishes and different tastes than you’re going to get from traditional bourbons.

Sounds great. Which Jefferson’s offering is your personal favorite?

You know, it’s kind of a mood thing. Our Jefferson’s Reserve is our quintessential bourbon; with four different recipes, you’re able to pack in so much flavor and have so much balance from the time it rolls over your tongue all the way through the finish, so that’s kind of my tried-and-true favorite. I really like the Groth right now because it’s new, and that elegant taste is so different. And then each Ocean that comes back is like Christmas morning; you don’t know what it’s going to end up like until it comes off the ship and we start tasting.

What, to you, is the ideal situation in which to enjoy Jefferson’s?

For me, I love just sitting outside and enjoying the weather, being outside. I ride horses quite a bit; I play polo. After we’re done playing polo, we usually sit back and have a bourbon and watch the night come to an end. It doesn’t get much better than that.

Ahh, so that explains why you sponsored the Greenwich Polo Club matches this summer. How long have you been playing? Tell us more.

I got suckered into it. I was down in Florida with a friend who plays, and he said, “I’m playing in a match; come out and watch.” He was playing a guy from Kentucky, and I realized we had a ton of mutual friends, and after the match we sat on the porch of the barn and had some bourbon, ironically enough. And they’re talking about the match and what was going on, and I was fascinated by it. They were like, “Trey, you ride, right?” I’d been on a trail ride in Wyoming; that was about the extent of it. So they pick up the phone, and unbeknownst to me, they arranged for a lesson for me for the next day. And I got on the horse, and I trotted up, and I could hit the ball, and of course they’re selling me, they’re like, “Oh my god, nobody can hit the ball like you can.” (Laughs) “All right, you want to try to canter up to it now, gallop up to it?” And I’d never galloped on a horse. So I did, and I hit a couple, and I’m like, “Wow.” It was just addicting. I’ve been doing it for three years, and this year, I think finally my riding is getting there—you can’t tell that I’m the worst one on the field. Which is typically what I am. But it’s a ball. It’s addicting.

How often do you get to go out and play now?

Quite a bit. I’ve got a tournament this weekend—the local polo team is playing against the Cincinnati polo team.

What other unusual indulgences do you have?

Well, squash is my other hobby. I play a lot of squash. That’s kind of my go-to. Other than that, anything on the water. I love to surf; love to fish; if I’m on the water I’m happy.

It must be tough to find surfing spots in Louisville, Kentucky. Where do you go for that?

Most recently to Santa Barbara or Costa Rica. Believe it or not, there’s river surfing in Louisville. We don’t have natural waves so we’ve got to make our own. There are boats that basically suck in water, 1200 pounds of water, to tilt the boat so it pushes off a wake, and you get up on a ski and you throw the ski rope into the boat, and you can surf that wave for miles. You can stay up there and hang on that wave forever.

What are some of your favorite places to go out eating and drinking around Louisville?

Edward Lee is my partner in our Chefs Collaboration, and he’s one of the Mind of a Chef and Top Chef guys. So his two restaurants, 610 Magnolia and Milkwood, are obviously favorites. There’s a place called Bistro 1860; the chef is Michael Crouch and he’s absolutely amazing. Every time I go there I have an over-and-under bet with the table on how many specials he’ll have, and I usually set it at 10, and it could be 12 for the night. And he does very small plates, and that’s how I love to eat—to try as many things as possible.

What would someone be surprised to learn about you?

People always ask, “Where are you today?” Because I’m on the road a lot.

What’s your favorite place in the world?

Istanbul. Because of the convergence of Europe and Asia, the culture’s just unbelievable. The people are unbelievably friendly and fascinating and intelligent. It’s just such a neat, different culture. I was in Cartagena recently, and the Colombians were beautiful and magnificent and hilarious. But last week I was in Austin and San Antonio. I spend a lot of time in Austin, and I fell in love with San Antonio.

We did a barrel-aged cocktail competition, so we hit nine different venues who’d had our five-liter barrels that they’d been ageing a cocktail in for up to 60 days. I have some friends from college that I hadn’t seen in 20 years, who found out I was coming into town, so we got together. My roommate from college, from Memphis, came in as well. Somebody got this 1940 Studebaker bus that had been tricked out to take us from bar to bar. So we had an absolute blast. The next day, we went to south Texas to go dove hunting on this rough cactus-filled, rattlesnake-infested land that was so starkly different. The following day, we went to this ranch that had five miles of Guadeloupe riverfront property, which is this quintessential Texas lazy river that people tube and kayak down, and we hung out by the river; we pulled up a folding table, and people brought food and drink, and we hung out there all day. It was just gorgeous. And then we went to another ranch in the Hill Country that night, and cooked paella over a fire. There’s much diversity in such a small geographic area that it was just gorgeous. And the people pretty much sealed the deal. And it was surprising—I didn’t expect much out of San Antonio.

What’s your definition of “the good life”?

The good life is when there’s nobody who dictates what you have to do. I’m pretty lucky that I can go ahead and experiment with these things I want to do, and nobody’s telling me I can’t do it. And I get to get up every day and do something different. So to me, that’s my definition of the good life.