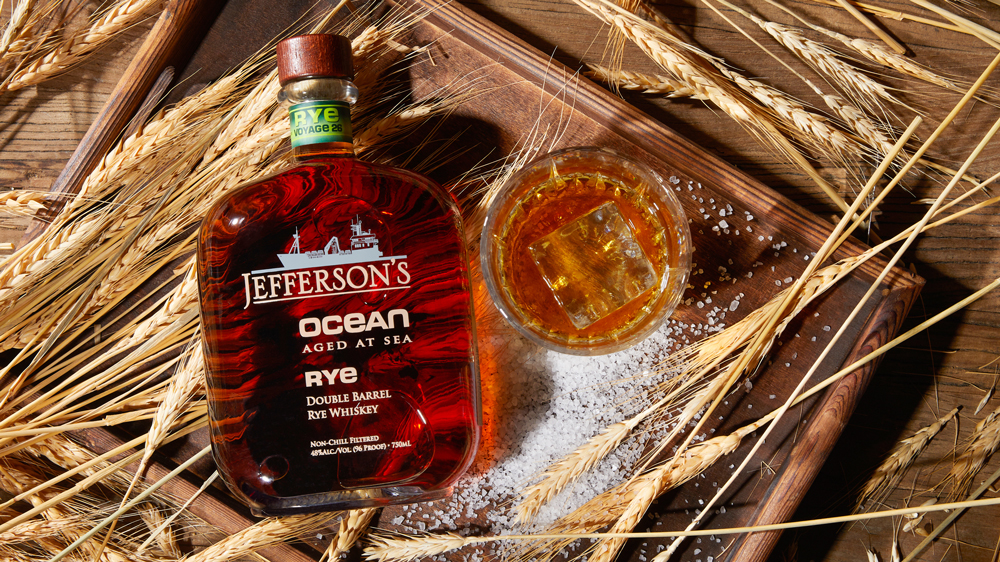 Jefferson’s Bourbon founder Trey Zoeller is nothing if not enthusiastic about his whiskey, coming up with a steady stream of new expressions that experiment with maturation and mashbill. The pinnacle has been the Ocean series, featuring whiskeys that are stowed onboard a container ship to travel around the world. The point here is that the whiskey’s interaction with the barrel’s more is amplified as the ship battles storms and ocean swells, and experiences different temperatures and humidity levels at each port in which the ship docks. The newest in this collection is Jefferson’s Ocean Aged at Sea Rye, the first rye whiskey from Jefferson’s to be given this treatment and the third overall rye released by the brand.

You might expect Jefferson’s to produce a rye more in the style of its bourbon, a Kentucky-made whiskey with a mashbill of somewhere between 51 and 60 percent of the grain. That’s not the case here, as this is a 100 percent rye whiskey (5 percent malted rye) that was distilled and aged in Canada. After spending five years aging, it was given a double barrel finish—75 percent in char #3 barrels, and 25 percent in toasted oak—before embarking upon its voyage to visit five continents and 30 ports. There are, of course, naysayers who posit that ocean aging is a gimmick, but given the whiskey’s popularity (this is the 26th ocean voyage) it seems the fans outweigh the detractors.

“I love ryes in cocktails,” said Zoeller at a recent tasting. “They are nice and sharp and have that great flavor, and then they dry out and shut up and allow the other components to shine.” For this release, he was intent on creating a sipping rye whiskey, something with mouthfeel and flavor that you’ll want to enjoy neat, and doesn’t necessarily shut up.

In that, Zoeller has succeeded. While it’s difficult to pinpoint exactly how ocean aging affects whiskey without being able to compare it to one that hasn’t undergone this journey, there’s a depth and complexity to this rye that belies its age. Case in point, consider a rye whiskey twice its age that comes from Canada and is released by an American brand, like WhistlePig. I would argue that this younger product is just as good, although very different in certain regards. I’m often dubious about the concept of salinity in a whiskey just because it was exposed to ocean air, either at sea or in a warehouse, but there is a touch of brininess to this rye. It’s incredibly spicy, with layers of dark berries and stone fruit that are buttressed by layers of citrus, vanilla and toasted almonds. There’s a bit of tannic dryness on the finish, perhaps more than I normally like from a whiskey, but it’s not enough to detract from the overall palate.

The spirit of experimentation at Jefferson’s is why the brand continues to be so intriguing. At that recent tasting, Zoeller revealed one of the failed attempts of the last few years, a Tabasco barrel finished whiskey that quite literally burned your palate with intense pepper flavors (though it was arguably better than George Dickel’s bizarre attempt at this). So yeah, not every lightbulb that goes off in the head of a person who runs a whiskey brand is going to work, but that’s okay. This particular release proves that it’s got some sturdy sea legs to stand on, and is one that rye whiskey fans should consider trying.