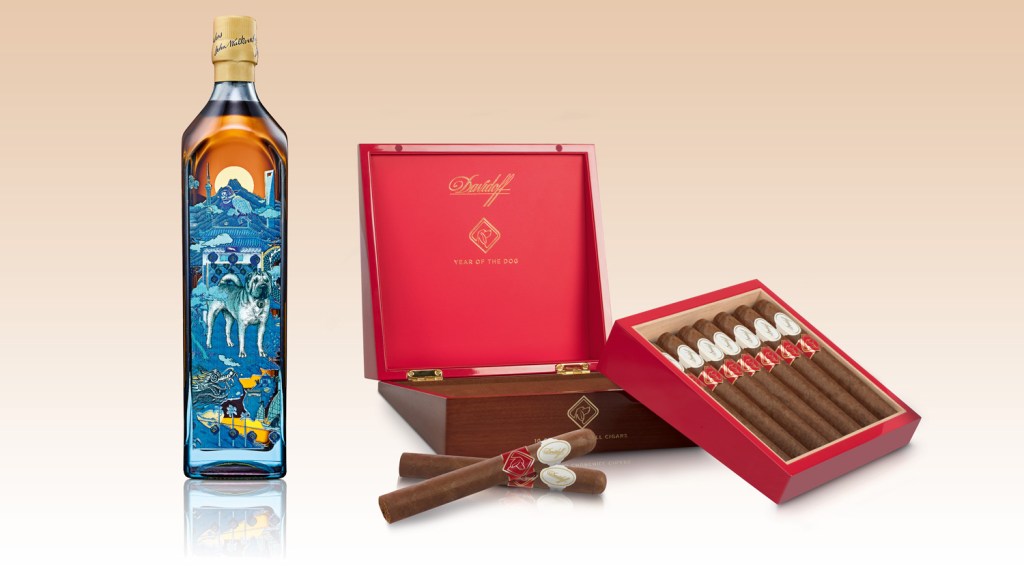 Not only is a dog man’s (and woman’s) best friend, but this loyal mascot is also the symbol of the current Chinese New Year, which officially begins on February 16, 2018, and lasts until February 4, 2019. The 11th in the 12-year cycle of the Chinese Zodiac, it is a fitting tribute for the New Year, for the Chinese Earth Dog represents loyalty and honesty, and people born under this sign are reputed to possess those same admirable traits. All of this means that they—and the rest of us—deserve a suitably rewarding treat in the form of a satisfying whisky and cigar. So it makes sense that, once again, two of the world’s leading luxury lifestyle brands are paying tribute to the Chinese New Year with a complimentary pair of limited editions.

The first order of celebrating the Year of the Dog is to acquire one of the limited-edition Johnnie Walker Blue Label Year of the Dog commemorative whiskies ($258). Offered exclusively for the Chinese Lunar New Year, this is the fifth of an ongoing series. Elegantly decorated in the triptych style—three separate renderings joined as one artistic scene—the haunting blue of the glass bottle depicts a loyal shar pei, originally bred as a watch dog for Chinese nobility, standing guard over the premium liquid inside. Worthy of such protection, Johnnie Walker Blue Label is the ultimate expression of the blender’s art, as only one in 10,000 whiskies, meticulously selected from the Johnnie Walker’s vast cellars, is deemed worthy of this exotic blend. While there is no age statement on the whisky, it may contain spirits as young as 15 and as old as 60 years, with some sourced from distilleries no longer in existence.

As a fitting companion to this ultra-premium blended scotch, Davidoff has created a Year of the Dog Limited Edition 7 x 50 gran Churchill cigar ($39 each and $390 per box). Handsomely packaged in an angle-cut, red-lined wooden box of 10, the double-banded cigars are presented in a lift-out tray so that they may be offered to guests. With a dark Ecuadorian Habano Claro wrapper, San Vicente Seco binder, and a filler composed of San Vicente Ligero, Piloto Viso, Piloto Seco, and Esteli Visus tobaccos, the medium-plus flavor is full of sweet chocolate and spiced wood—a perfect match alongside Johnnie Walker’s Year of the Dog blended scotch. Indeed, just like the loyal canine, these two companions are worthy of a lasting friendship.