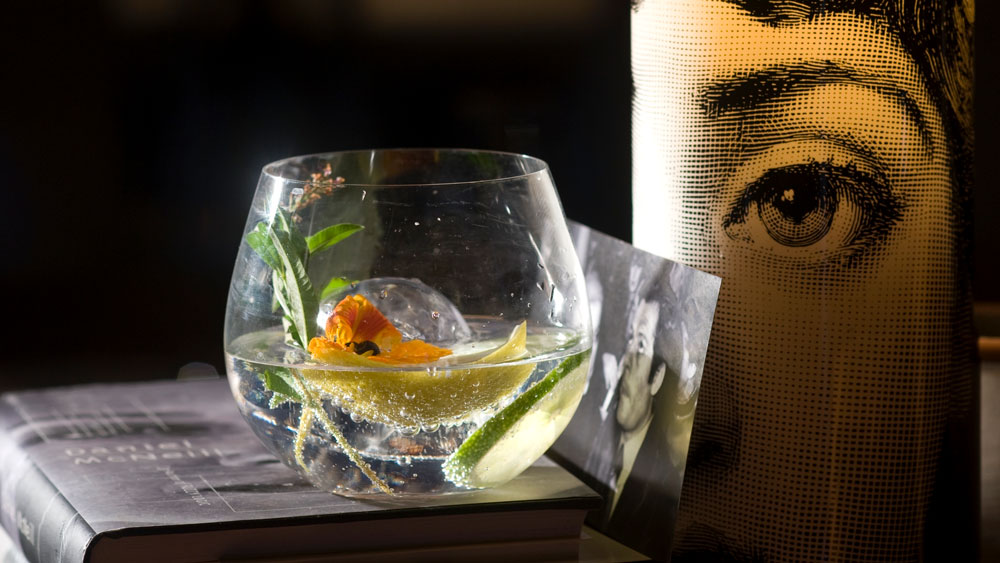 The components are laid out as precisely as a surgeon’s instruments: two sharp Laguiole knives, a set of tweezers, an array of botanicals, citrus fruits and berries, a jigger glass, and a battalion of balloon-shaped wine glasses. Ricardo Garrido Gomez—general manager at the Bazaar by José Andrés at the SLS Beverly Hills and a native Madrileño—bounds toward the table carrying a bucket of perfectly clear cubes of ice. “So,” he says, “what do you know about gin and tonics?”

Clearly, the Spanish obsession with the G&T is still going strong, even 15 years after chefs like Andrés in the northern part of the country elevated the tired old well drink into something creative and exciting. This month, the Bazaar is celebrating the G&T with a monthlong festival that kicks off on October 19—which happens to be International Gin and Tonic Day—featuring a special menu made with 10 gins from around the world. The hotel’s new Global Epicurean package ($587, including a night’s stay) will let you take some of that creativity home: It features a private G&T tutorial, in which the guide reveals the secrets behind the restaurant’s signature drink, the Ultimate Gin & Tonic, along with other discoveries.

But first, the basics. The point of the drink is the gin, and Gomez has brought out four to experiment with: the Botanist from Scotland, Monkey 47 from Germany, Gin Mare from Spain, and Hendrick’s from the United States. Gomez pours a measure of each into the wide Burgundy glasses.

We sniff and sip, noting aromas and flavors ranging from juniper to white pepper. He adds a few drops of water to bring down the alcohol level, and more characteristics find their way out: lemon rind in the Botanist, fresh berries in Monkey 47, savory olives and basil in Gin Mare, and cucumber and roses in Hendricks.

Each garnish is chosen to bolster those particular flavors—no generic lime wedges here—and it’s important that the garnishes are pristine, which means no limp basil leaves or bruised fruit. “In England, gin and tonic is like mixing a rum and Coke—all you get is the soda’s flavor,” he says. “Here, it is all about tasting the gin.”

And there are other musts: Avoid the usual tumbler in favor of a Burgundy wine glass, which Gomez calls “a gin and tonic glass.” It will better channel the aromas and makes a beautiful fishbowl presentation. Build the drink by first dropping in a single, large cube or sphere of the clearest, best-flavored ice you can—ideally direct from the freezer. The single cube minimizes dilution, and the rough surface direct from the freezer will grip the garnishes placed on top. (To make clearer ice at home, Gomez boils water for 35 minutes and lets it cool to room temperature before freezing. “It’s not perfect, but it’s better,” he says. “I also smoke and vacuum-seal basil and put it into the ice. Or freeze in a whole berry—or citrus.” If it’s a wheel of citrus, set it halfway down the form, horizontally, so the rind flavors the drink before the ice even melts.)

Back to our drink. After the ice, measure in 2 oz of Hendrick’s (every G&T should contain 2 oz of gin, Gomez says). Drop in three whole juniper berries. Set a lime wheel on top of the ice; express the oil from a lemon twist on top of that, and then balance it on the lime wheel. Tweezer in a sprig of fresh lemon verbena blossoms, and carefully pour in Fever-Tree Indian tonic water, ideally three-quarters of a bottle. Fever-Tree is the only tonic brand that Andrés uses, Gomez explains, for several reasons—the fine size of the bubble helps the drink stay effervescent, cane sugar (instead of sucrose) provides a lower hit of sweetness, and the flavor of natural quinine and a high level of minerality enhance the overall drink.

And there you have it—the Ultimate Gin & Tonic. There is no stirring, though Gomez says in Spain, drinkers give G&Ts a stir with their fingers. Plus, it is served slightly warmer than the icy drinks you’ll often get on a hot summer day. “Have you ever had white wine really cold?” Gomez says. “You can’t taste anything until it warms a little. Same thing with gin—you lose the flavors.”

With some prodding, we also got Gomez to share three of his favorite variations at home. Each is made with 2 oz of gin and three-quarters of a bottle of Fever-Tree tonic:

First variation: Plus Boodles (sweeter than most gins) with ¼ oz brewed mango tea and a mango slice

Second variation: Plus Gin Mare with a basil leaf and two skewered green olives (cut a slit across each olive to release the flavors and oils)

Third variation: Plus Hendrick’s with the pulp from a muddled-together raspberry, blackberry, and strawberry and an ice cube with a berry frozen inside

A final word of advice: Be creative but not too creative. “Too many garnishes, and you will destroy the drink,” Gomez says. “At the end of the day, you want to taste the gin.”