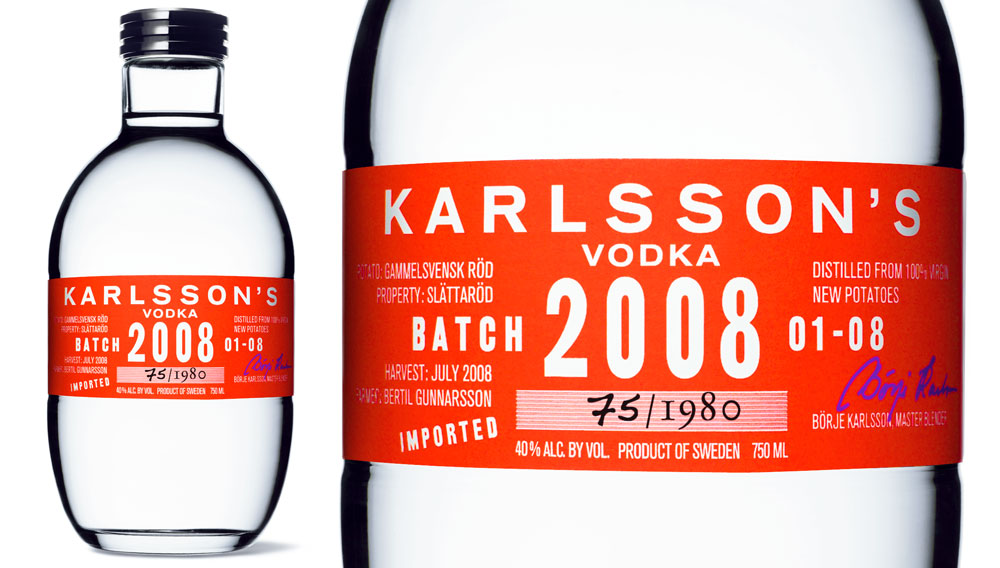 In spite of the official government ruling that all vodkas are tasteless, odorless, and colorless, anyone who has sipped two different vodka martinis side by side knows that there are variances in brands. Some of these are quite dramatic, while others are very subtle, but one of the most distinctive is Karlsson’s Gold, a Swedish potato vodka distilled by Börje Karlsson. To achieve its goose down–soft texture and a spicy-floral flavor so pure no filtering is required, Karlsson takes seven different varieties of costly virgin new potatoes grown on the Cape Bjäre peninsula in southwestern Sweden and distills each one separately. Then Karlsson blends them together, much like single malts are combined to make a blended Scotch.

Seizing upon each distilled potato’s individual characteristics, Karlsson has now taken just one of these distillations—Batch 2008 ($80), made solely from the Gammel Svensk Röd potato—and bottled it separately. Only 1,980 signed and numbered bottles were produced.

Karlsson’s Batch 2008 is almost grappalike in its tingling mouthfeel, with slightly briny undertones. Serve it chilled with a sprinkling of black pepper the next time someone mentions all vodkas are alike. And for yet another single-potato vodka experience, try Karlsson’s second single-potato distillation, the much sweeter Batch 2009, made with the Solist potato varietal and released in November 2012. (http://karlssonsvodka.com/the-vodka/karlssons-small-batch)