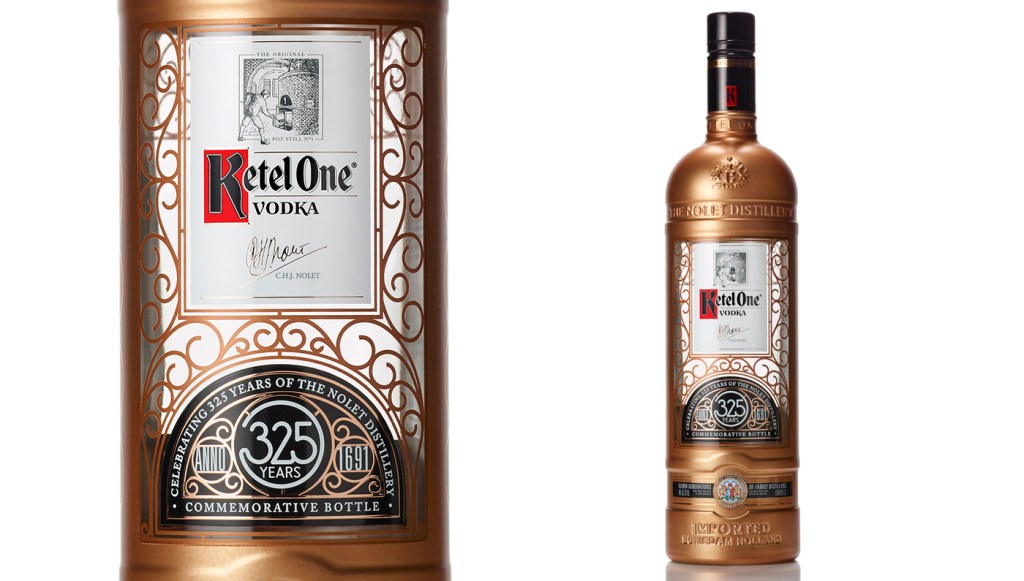 There are not many distillers that have existed long enough to celebrate their 325th anniversary, but the Nolet family of Schiedam, Holland—whose distillery produces Ketel One vodka—falls into that rarified realm. At one time there were over 400 fully operating distilleries in the area near Rotterdam. Today, having survived the French Revolution, Prohibition, a depression, a recession, and two world wars, the Nolet distillery is the only one left. To celebrate the occasion, the distillery has introduced the limited-edition, 1-liter commemorative bottle called: 325th Anniversary Nolet Family Distillery Bottle by Ketel One ($32.49).

The Nolet story began in 1691, when Joannes Nolet started distilling jenever, a spirit similar to gin. In 1970, the family’s 10th generation, Carolus H.J. Nolet Sr., strived to make it the best-selling jenever in the Netherlands. Then, in 1983, noticing America’s penchant for vodka, he created Ketel One, named after the distillery’s original coal-fired copper pot still: Distilleerketel #1. Since its introduction to the United States 10 years later, this crisp column and pot still winter-wheat distillation has become one of the world’s best-selling vodkas.

In 2011, Ketel One returned to its roots by reintroducing gin to its brand. But not just any gin: Nolet’s Reserve, which, at $700 a bottle, is the world’s most-expensive gin. Distilled with atypical botanicals and “secret” ingredients that include essences of rose petals, apples, berries, and Chinese herbs, only 494 bottles are produced each year. More accessible is the thickly floral Nolet’s Silver gin, which retails for $50 a bottle.

Today, Nolet Sr. and his sons Carl Jr. (executive vice president of Nolet Spirits USA) and Bob (who oversees the distillery and European sales) continue the legacy of this family-owned distillery. The newly released commemorative Ketel One bottle is accented with the signatures of the family’s 10th and 11th generations and with embossed gold coins to represent the first 10 generations. The handsome bottle itself is dressed in a copper matte finish in homage to Distilleerketel #1, the copper pot still that started it all. (ketelone.com)