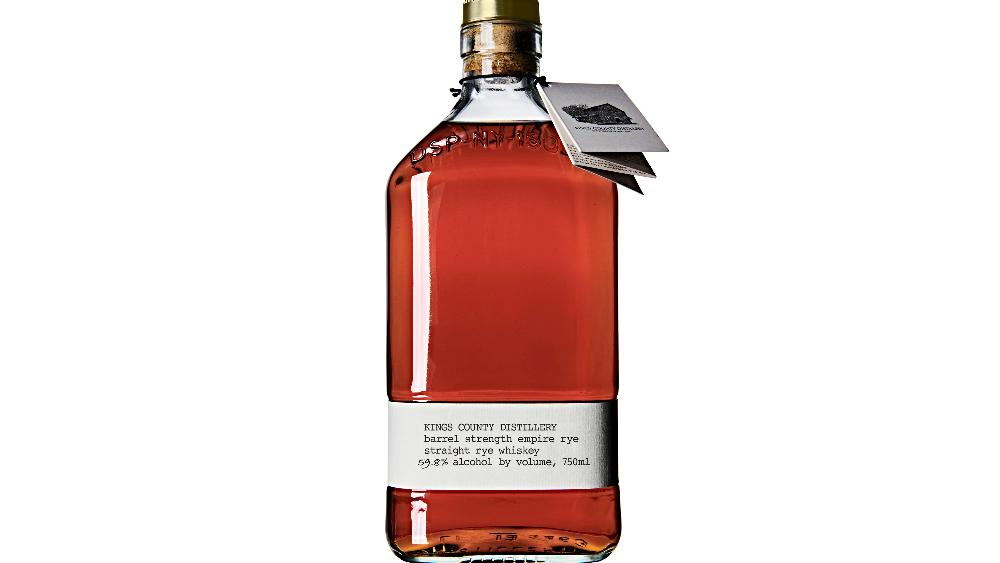 Brooklyn distillery Kings County is consistently one of the most interesting craft whiskey makers out there today, whether it’s pissing off the Irish Whiskey Association by producing “Irish style American whiskey” or trying to bring back the good name of American blended whiskey. But the latest Kings County news has to do with rye whiskey, as the distillery is launching a new batch of its Empire Rye along with a barrel-strength version.

Empire Rye is a whiskey category that has very specific standards—at least 75 percent of the grain in the mashbill must be grown in New York State, distilled to no more than 160 proof, enters new charred oak barrels at no more than 115 proof, matured for a minimum of two years and produced at a single New York State distillery. While not federally recognized, this designation is a collaborative effort among distilleries including Kings County, Black Button, New York Distilling Co. and Coppersea.

Kings County’s Empire Rye is made from a mashbill of 80 percent rye and 20 percent English malted barley. It’s pot distilled, and the new Batch #7 consists of barrels of whiskey aged between 2.9 and 4.9 years that is bottled at 102 proof. The new Barrel Strength Empire Rye Single Barrel is made from the same mashbill as the regular rye, but this comes from just one six-year-old, 53-gallon barrel at cask-strength of 119.6 proof. We did not get to sample this whiskey, but official tasting notes describe it as having vanilla, rose petal, oak and hot cereal on the palate, along with molasses, honeyed black tea and a peppery tingle on the finish.

According to Kings County co-founder and distiller Colin Spoelman, small distilleries in Pennsylvania, Maryland and especially New York have been largely responsible for the resurgence of rye whiskey made using what he calls “heritage methods.” This comes decades after the category lost its popularity by the early 2000s, leaving the big distilleries in Kentucky (and MGP in Indiana) to make virtually all the rye whiskey you could find on shelves. But this has all changed in recent years, and rye is a whiskey drinker’s favorite once again. You can find Empire Rye ($99) for sale through online retailers like Drizly, but you’ll have to head to the distillery at Brooklyn’s Navy Yard, or to a select NY retailer, to get your hands on the barrel-strength version ($149).