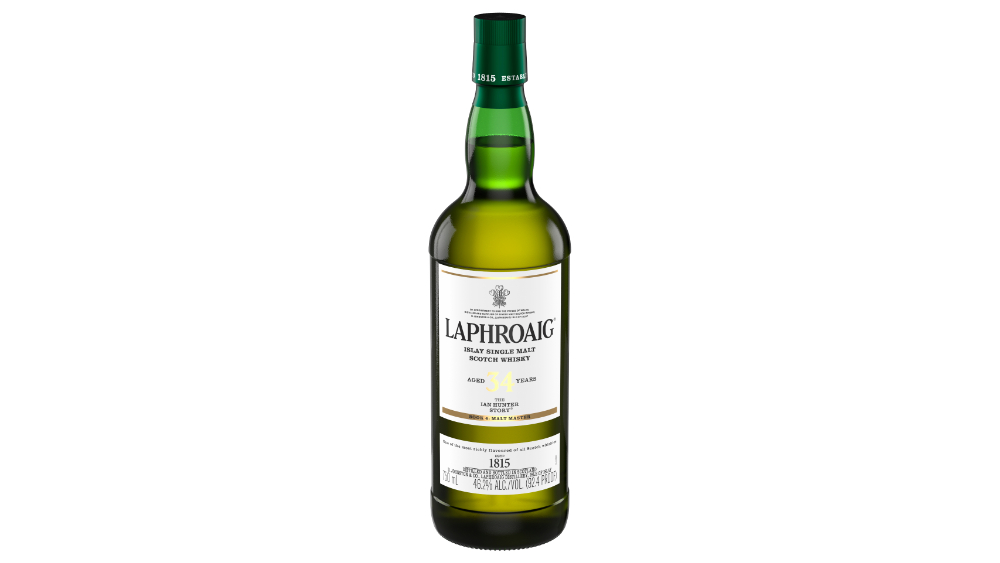 Laphroaig is an Islay distillery known for its peated whisky that is quite proud of its distinctive tasting notes—iodine, seaweed and burning rubber are a few that have been used in the past. The latest ultra-premium release from this assertive single malt brand is the fourth installment in the Ian Hunter series of ultra-aged whiskies.

Ian Hunter Book 4 is the oldest whisky yet to be released in this collection named after the last man in the Johnston family to own and operate the Laphroaig distillery. Each chapter in the Ian Hunter story thus far has focused on a particular element of whisky production—Book 1: Unique Character and Book 2: Building an Icon were both 30-year-old whiskies, the former aged in first-fill bourbon barrels and the latter in Oloroso sherry casks. Book 3: Source Protector, which amped the age up to 33 years, was a 1987 vintage matured in ex-bourbon barrels.

The new Book 4: Malt Master combines both of these worlds and brings the age up yet another notch to 34, initially matured in American white oak bourbon barrels and then finished in European oak Oloroso sherry casks. It’s non-chill filtered and bottled at 46.2 percent ABV. The name Malt Master is meant as a tribute to the Laphroaig malting floors where the barley is wet with water from the River Kilbride and allowed to germinate before being dried out with peat smoke. There are not many distilleries that still have malting floors in use; instead, most get their malt from larger operations that supply many different distilleries. Laphroaig gets most of its malted barley from Port Ellen Maltings (owned by Diageo), but does indeed still malt some of its barley in-house.

We have not been able to sample this whisky yet, but the distillery has provided some tasting notes. On the nose, there’s some tobacco, eucalyptus and fresh straw, along with notes of golden syrup, toffee, heather honey and crushed black pepper. On the palate, expect some sweet smoke reminiscent of “barbecued pork with sweet honey marinade together with notes of peach and orange blossom, a touch of iodine and earthy floral notes.”

Laphroaig Ian Hunter Book 4 is not yet available in the US, but when it arrives in early 2023 it will be in very limited numbers and likely command a hefty price. The thing is, these aged expressions from the distillery are usually excellent, so keep an eye out for this one. In the meantime, you can still pick up a bottle of Book 3 at The Whisky Exchange.