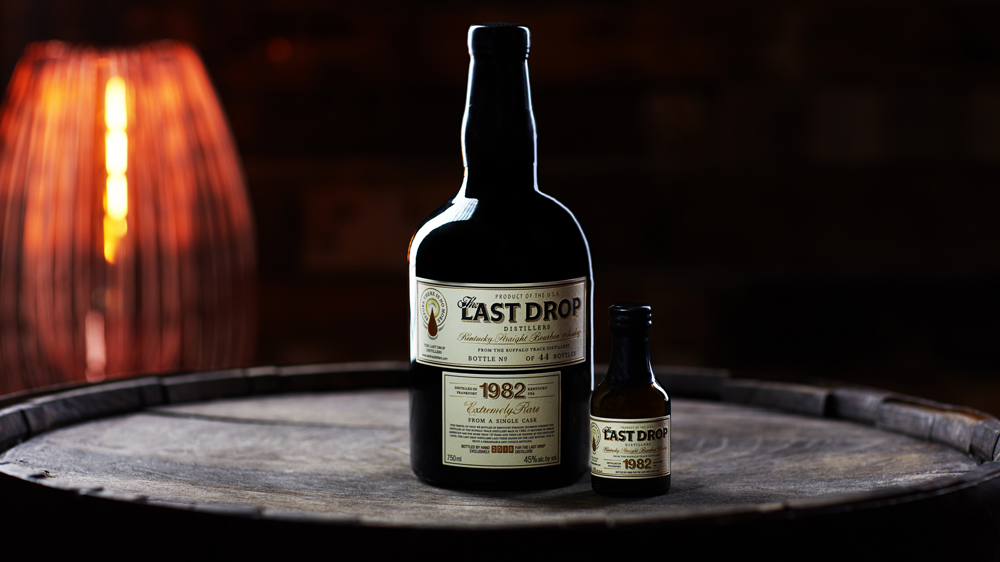 The Last Drop Distillers is a company that does not, in fact, distill anything. It does, however, boast an impressive portfolio of rare distilled goods. What the folks at this decade-old, London-based outfit possess is a very particular set of skills—deftness acquired over the course of long careers (the company was founded by the guys who launched Baileys Irish Cream and Johnnie Walker Blue Label, among others). Think of the Last Drop Distillers as Liam Neeson in Taken, only instead of hunting people who kidnap loved ones, they’re dead set on tracking down lost spirits. If there’s rumored to be an old stash of forgotten whiskey tucked away in the corner of some dusty storehouse in the middle of nowhere, rest assured the Last Drop Distillers will look for it, find it, and make a killing selling it.

The company’s latest intriguing find is a 1982 vintage bourbon from the Buffalo Trace Distillery. Only 44 bottles exist, and beginning in December, they’ll be available upon request at fine spirits and wine merchants nationwide for the un-small sum of $4,000 apiece. Now you might be wondering, how on earth did these Brits get their hands on such a rare and valuable whiskey “lost” in one of Kentucky’s most famous distilleries? Well, it certainly helps to have the inside track, and it just so happens the Last Drop was recently acquired the Sazerac Company, operator of a number of bourbon distilleries including—you guessed it—Buffalo Trace.

We have it on good authority that those soon-to-be-released 44 bottles are indeed all that remain of this unique whiskey, which was distilled four decades ago and pulled from barrels in 1982 to avoid overextraction. The nose foretells the spirit’s greatness, with a seductive elegance accented by rich toffee and candied ripe fruits. Those who appreciate complexity in whiskey will swoon over the 1982, which offers layer upon layer of delicious and diverse flavors, from apple to pear to pecan and Belgian dark chocolate. The finish is long and highlighted by vanilla, dark cherry, and oak notes. As with its previous 12 releases, the Last Drop’s 1982 Bourbon package comes with a 750 ml bottle, a 50 ml miniature replica, and a pocket-size tasting book. Act quickly, as it’s only a matter of time before this extremely limited offering gets, well, taken.