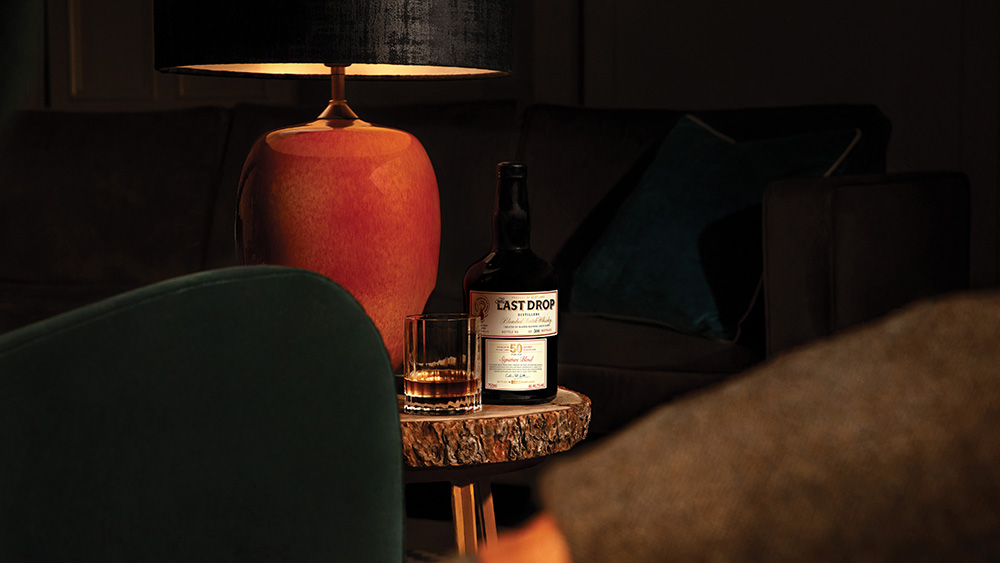 Coinossiers can now sip and savor the very best parts of Scotland’s whisky history. The Last Drop has just released its first Signature Blend comprising a selection of extraordinary aged scotch sourced from all corners of the country.

Limited to just 500 bottles, the expression was created by the Last Drop’s master blender Colin J.P. Scott. With more than 50 years of experience, the whisky pro previously worked at Chivas Brothers where he produced an 18-year-old, 25-year-old and 38-year-old, among other popular premium drops. This marks his second 50-year-old blend and his first with this distillery.

Scott began by delving into the Last Drop’s inventory to see if he could strike liquid gold. He curated a blend of malt and grain whiskies, all of which have aged for at least 50 years in bourbon and sherry oak casks across Scotland.

The whiskey comes with a certificate of bottling and a pocket-sized tasting book.  The Last Drop

“For centuries, Scotland’s finest malt and grain distilleries have been distilling unique spirits and laying them in casks for the future,” Scott said in a statement. “Yet in my half-century career, this is only my second 50-year-old blend, as access to these exceptional liquids is rare.”

Scott wasn’t willing to share any information regarding the provenance of each Scotch as he believes it’s the final taste that defines a blend, not the specific whiskies selected. Suffice it to say, the master blender did make some surprising discoveries along the way. For example, he unearthed a “very old smoky whisky” that one would assume was from Islay, but worked out it was actually from Speyside.

Regardless of which spirits made the cut, the Last Drop says the 96-proof blend has a sumptuousness that only comes with such maturation. According to the distillery, the whisky is rich and luxurious yet retains a balance and freshness that belies its age. As for the flavor profile, sippers can expect dried fruits and scented floral notes enhanced with sweet spices and creamy toffee.

The Last Drop has more blends in the pipeline, too. With a newly formed coalition of spirits experts known as “The Assembly,” it plans to produce a range of limited-edition bottlings of rare aged whiskies.

“Our goal has always been to find casks that have been forgotten or perhaps just contained too little liquid to be considered worthy of bottling,” managing director Rebecca Jago said in a statement. “These bottles are like museum pieces, but something you can taste, savor and enjoy.”

Priced at $4,250, the Last Drop’s 50 Year Old Signature Blended Scotch Whisky will be available across the US as of mid-July.