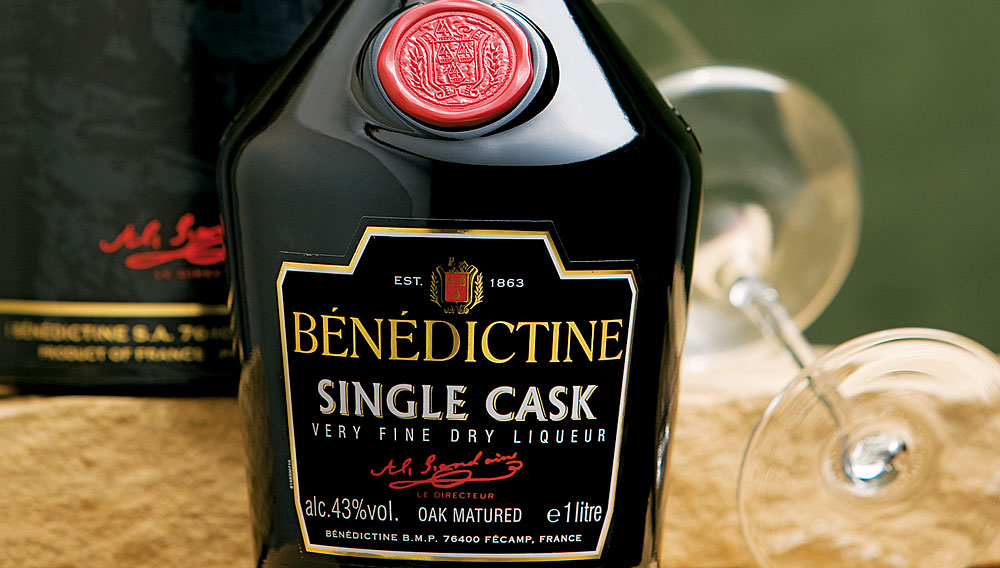 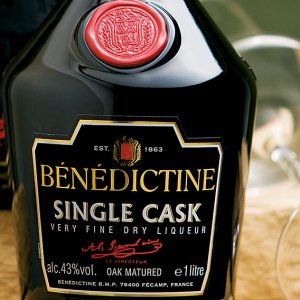 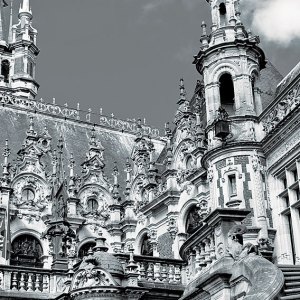 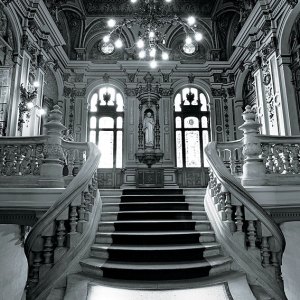 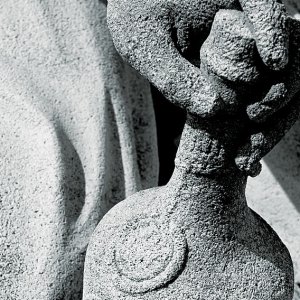 Alchemy is astir in the village of Fécamp. Puffs of steam curl across the gravel courtyard of the town’s Palais Bénédictine, indicating that today is one of the roughly 60 days each year that the palace—a late-19th-century fantasy of Neo-Gothic and Art Nouveau architecture on France’s Normandy coast—operates its stills.

René Ras, a distiller at Bénédictine, greets me in the courtyard and escorts me into the subterranean recesses of the distillery. Ras is one of three living guardians of the secret formula for Bénédictine D.O.M, a legendary liqueur that this year celebrates the 500th anniversary of its invention. Though four men assist Ras in operating the stills, only he knows how to combine the 27 herbs and spices into various mixtures; how long each concoction must macerate in 96 percent alcohol; and at what temperatures to distill the lots to create Bénédictine D.O.M. (A copy of the liqueur’s recipe is locked in a vault in Geneva.)

The Bénédictine company, however, is open about most of the liqueur’s ingredients, displaying 20 of the 27 herbs and spices in the palace’s museum next to bottles of failed counterfeits. But a shopping list is not a recipe. Ras and his fellow workers blend several distillations of the herbs and spices, redistill the blends, and combine them with acacia honey and infusions of lemon peel and vanilla bean. Somewhere along the way, they add a saffron distillate before adjusting the alcohol level and aging the final product in French oak. Start to finish, the process to produce Bénédictine D.O.M.—as well as the limited-edition single-cask version sold only at the distillery—takes about two years.

In the basement at the Palais Béné­dictine, Ras invites me to peer into a large copper pot still that has just been disassembled. The matted substance coating the bottom of the alembic smells like a lemony hay bale, with overtones of pumpkin pie. Ras says this particular distillation—one of four that go into the final blend—combines lemon balm, cinnamon, cardamom, and angelica with a great deal of hyssop. A mélange of myrrh and aloe emanates from another alembic, which a worker opens to remove the sodden remains through a clean-out door. “Compost,” says Ras.

The still’s muddy waste stands in contrast to the amber purity of the Bénédictine I sampled on my first night in Fécamp, a seaside resort and former fishing village located about 20 miles north of the mouth of the Seine River. A chill wind was blowing off the English Channel, and I asked my hotel’s bartender what he recommended for warming up. “Bénédictine, bien sûr,” he said, pouring the liqueur into a squat glass containing three small ice cubes. Inhaling the heady blend of Christmas spices, lemon, and a dozen other fragrances, I sipped and allowed the spirit’s glow to spread from my throat to my limbs.

Every good sip deserves a good story, and the tale of Bénédictine is as sweet and lingering as the liqueur’s taste. Benedictine monk Bernardo Vincelli created the spirit in 1510, during the age of European alchemy. Vincelli had been dispatched from the warm isle of San Giorgio Maggiore, near Venice, to the chilly hinterlands of Normandy. After his first winter, he concocted what came to be called “Dom Bernardo’s elixir,” a spirit intended to keep his fellow monks happy and strong. In 1534, Francis I tasted the drink on a visit to the monastery, and it soon became a staple at the court of France’s first Renaissance king.

Or so the story goes—which is part of Bénédictine’s appeal. The liqueur’s genealogy contains more smoke, mysteries, and myths than a Dan Brown novel. According to the official company version, the monks kept making the elixir until 1789, when, during the French Revolution, the brothers fled the abbey. The abbey was subsequently looted, and the recipe presumed lost.

But like all good secrets, the formula for Dom Bernardo’s elixir was only in hiding. In 1791, a local notable purchased the abbey’s papers. More than 70 years later, in 1863, wine merchant Alexandre Le Grand (1830–?1898) inherited the documents. He deciphered the alchemist’s notes to re-create Dom Bernardo’s drink, and within a decade he was producing 150,000 bottles a year of what he christened Bénédictine D.O.M.: “Bénédictine” for the order of the monks, “D.O.M.” for the Latin Deo Optimo Maximo, or “to God, most good, most great.”

Le Grand did not live to see the completion of the Palais Bénédictine, but the structure is a monument to his flair, taste, and business acumen. Le Grand was selling a medieval mystique as much as he was selling a libation, and his complex could not be more medieval-revival if suits of armor stood sentry at every stairwell. Just as Impressionism was gaining a toehold in France (Claude Monet famously painted the cliffs at Etretat, just a few miles from Fécamp), half the country was actively trying to resurrect the ancien régime. With his vast collection of Gothic art, Le Grand did his part for the old guard.

Many of the larger rooms at the Palais Bénédictine—now the most-visited tourist attraction in Normandy—serve as galleries for Le Grand’s sculptures and paintings, which once adorned medieval churches and monasteries. The greatest treasures are ivory sculptures, many from nearby Dieppe, representing Biblical scenes. Presiding over the palace’s courtyard is a bronze of Le Grand himself, seated in an armchair and holding a book—representing the mysterious recipe for Bénédictine D.O.M.—in his lap.

Bénédictine today sells about 200,000 cases worldwide of Bénédictine D.O.M. and its offshoot, B&B, a mix of the ancient liqueur and brandy. B&B dates only to the 1930s, when a barman at the 21 Club in New York began floating a shot of brandy on top of a glass of the liqueur. The “B&B” drink became so popular that the company began bottling it for the American market, where it now outsells Bénédictine D.O.M. by nine to one.

The original Bénédictine remains an essential ingredient in such cocktails as the Singapore Sling and the Vieux Carré. On the Normandy coast, the liqueur is often drunk as an aperitif or a digestif—either with water and a lemon twist over ice, or more festively as a shot in a flute topped up with Champagne. But “most of the locals prefer a cocktail,” says Didier Deschamps, barman at the Hotel Le Grand Pavois in Fécamp, while serving me a drink that he presented in the French bartenders’ national championship. The cocktail—comprising a shot of Crème de Fraise des Bois (a liqueur of alpine strawberries), a shot of Bénédictine D.O.M., Champagne, and a fresh strawberry—is a little like going to church on a feast day.

Later that evening, I join Ludovic Miazga, a London-based French bartender who serves as Bénédictine’s global brand ambassador, for a dinner of Normandy shellfish at Dormy House in Etretat. Before our feast, we sample the house-specialty cocktail, which is made with Bénédictine D.O.M., orange juice, and the ubiquitous Champagne. It is classic French bourgeois—round, sweet, and as comfortable and idiosyncratic as an old Citroën.

Back at the Palais, Miazga mixes me a series of simple Bénédictine drinks, including the B Pamplemousse (with grapefruit juice), the Bobby Burns (with Scotch and sweet vermouth), and the Big Ben (fresh lime and tonic water, with the Bénédictine sitting on the bottom like a bell’s clapper). “It has so many subtle flavors that you can choose which one to accent by what you mix with it,” he says.

In anticipation of the 500th anniversary, Miazga spent much of 2009 visiting bars across the United States looking for a new classic cocktail. In December he found it, selecting the Monte Cassino and crowning its creator, Damon Dyer (a bartender at Louis 649 in New York’s East Village), the “Alchemist for Our Age.” The creation—equal parts Bénédictine, yellow Chartreuse, rye whiskey, and lemon juice—won Miazga over for its simplicity, which he deems essential when creating a cocktail recipe with Bénédictine.

To celebrate further the demimillennium, the Palais Bénédictine is mounting a contemporary-art exhibition on modern-day alchemy. As for rumors of an anniversary product at year’s end, that is a secret as well kept as Dom Bernardo’s recipe.