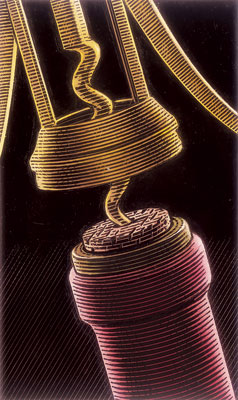 The silver flatware and Meissen china are arrayed on a gleaming dining table festooned with more blossoms than a Brazilian rain forest. The host’s favorite chef has, perhaps with some difficulty, been retained. The menu’s five courses (after negotiations rivaling those at Malta) have been precisely selected not only to complement and contrast each other’s distinct flavors and textures, but also to accentuate the procession of wines that will provide—from the first crisp sip of 1996 Dom Pérignon to the final drop of Adriano Ramos-Pinto 1966—the evening’s unforgettable grace notes. The staff is assembling, the kitchen is abuzz, all is ready—including, one hopes, the wine. As the host makes his way down to the cellar, accompanied by the headwaiter, a certain angst takes hold. Like an impresario whose stage is set, and whose orchestra tunes its instruments, he wonders anxiously whether his divas will be in voice. Will their performance prove a transcendent experience, he asks himself, or will their melodies fall flat?

As the sommelier gets to know her client, she can tailor her advice, calibrating wines’ peak windows to a collector’s preferences.

For many collectors, an older bottle of wine occupies a treacherous terrain in the cellar. Until it is uncorked, every bottle has more or less equal potential to reveal itself as time capsule or time bomb. The vineyard might be fabled, the provenance beyond reproach, the handling pristine—even the stars might be aligned; but no chart—astrological or otherwise—nor any meditation, however profound, upon the prized bottle will answer the ultimate question that plagues all hosts: Is the wine inside ready to drink?

Whether one feels this anxiety acutely or not at all, the risk of disappointment exists, because most fine wines have individual lifespans: They are living things, and they change. Indeed, part of the pleasure in collecting vintage wine is to bear witness to its changes, its stages of fitness, focus, and maturity. But this satisfaction has its perils. Like most living things, wines have their cycles. They lose their fruit character. They can become hard or brittle or mute. They can be brilliant upon opening and then immediately shut down. They can be dormant for years, while one flavor compound gathers definition as another recedes. Past their prime, they often fade, like a watercolor exposed too long to sunlight: Only traces of their former brilliance then remain, and even these will quickly disappear in the glass.

In The Story of Wine, Hugh Johnson famously recalls what he believes was the oldest bottle of wine ever consumed: It was German, a Steinwein, made 421 years before being opened (in 1961), in the year 1540—24 years before Shakespeare’s birth. Prior to this tasting, Johnson had tried two 19th-century wines. “Both,” he writes, “had completely perished.” But the Steinwein was still very much alive. So much so, writes Johnson, that “nothing has ever demonstrated to me so clearly that wine is indeed a living organism, and that this brown, Madeiralike fluid still held the active principles of the life that had been conceived in it by the sun of that distant summer. It even hinted, though it is hard to say how, of its German origins. For perhaps two mouthfuls we sipped a substance that had lived for over four centuries, before the exposure to the air killed it. It became vinegar in our glasses.”

No anecdote better highlights the wondrous, precarious nature of older wine. A bottle in the cellar collecting dust amounts to a collection, under glass, of organic compounds with names that crowd the pages of a college chemistry textbook: colloids, polysaccharides, phenols, polymers, anthocyans, and the like. These elements produce the desirable aromas and flavors in wine. Together, they form a complex matrix inside the bottle, drawing sustenance from that tiny bubble of air trapped by the cork and, the gods willing, converging in such a way that one perceives them as harmonic, balanced, and sublime.

The challenge, of course, is to determine when this happy nexus occurs. Stores and magazines offer vintage charts, which make a good start, but they do not account for a wine’s storage history, or for the fact that most great wines come from very particular terroirs, winemaking habits, and styles. One can’t rely on a Burgundy vintage chart, for example, to disclose the optimum time frame in which to open a 1995 Coche-Dury-Corton Charlemagne.

“It began to look a lot like trying to manage a stock portfolio, except that what I was doing with my wine was more like hiding my certificates under a mattress.”

Some wine experts write critical notes suggesting an ideal window for consumption, but as someone who writes these notes, I can tell you that, as often as not, these windows amount to wishful thinking. The technical considerations involved in these predictions aside, no critic can begin to take into account, when assessing a wine, an individual’s particular preferences. Some of us prefer brighter, younger wines, others older, more complex ones; some of us like them slightly chilled, others at room temperature, and so on. All of these factors contribute significantly to the overall experience.

Rare indeed is the collector who has the time and the photographic memory to keep track of the optimum window for the hundreds, perhaps thousands, of bottles in a given collection. Most collectors have other responsibilities or avocations that steal precious time from the rigors of cellar management. And the vintages keep coming, following one another with inexorable yet delightful regularity.

Fortunately, for those of us who do not yet have a full-time sommelier, a new solution avails itself. Vintrust, a wine storage and consulting team of sommeliers, analysts, and wine collection professionals, provides collectors with the essential tools to store, track, and manage their collections, offering services that not only gauge the drinkability of a given bottle, but also remind the collector when that wine achieves its peak.

Vintrust is the brainchild of André de Beaubigny, who moved to the San Francisco Bay Area in 2000, after a successful career as an investment banker, and thought that he might want to start a wine collection. The wines he liked were highly allocated, but as it happens, he was entering the fray just as hundreds of dot-com bubble riders were losing their fortunes and their places on the wine allocation queues, and so, in no time, he found himself on the short lists of a number of prized wineries. This is how, practically from the moment he began, his collection got the better of him. In a matter of weeks, he filled his wine coolers and stacked wine in the darker corners of his garage, his kitchen, and his dining room. “At that point my wife gave me an ultimatum,” he recalls. So he trucked his collection to the nearest wine storage facility, which he filled in a matter of months, forcing him to rent yet another locker to prepare for the next vintage.

De Beaubigny quickly discovered that tending to his collection was seriously dampening his enjoyment. “It began to look a lot like trying to manage a stock portfolio,” he says, “except that what I was doing with my wine was more like hiding my certificates under a mattress.” What he needed, in effect, was an analyst to help him manage his stock—in this case, wine.

Thus was Vintrust born. What began as simply a service to solve storage problems, however, quickly expanded to include elements of inventory control, concierge service, asset management, education, consultancy, even party planning. Early on, de Beaubigny hired sommelier Lisa Minucci (formerly of Palio in New York, as well as Auberge du Soleil in Napa) to manage the service aspects of the business. She promptly realized that the people best equipped to know when to drink what were those who tasted thousands of wines a year, across dozens of vintages, and who tended to take careful notes on every wine: her fellow Bay Area sommeliers.

Minucci has since assembled a crack veteran team of sommeliers from across the country who act as personal wine assistants, advising collectors on what to hold, what to drink, what to sell, even what to buy. As the sommelier gets to know her client, she can tailor her advice, calibrating wines’ peak windows to a collector’s preferences. Minucci believes that this close interaction enables collectors to better enjoy their wines. “People pay more attention,” she says. “They become more aware of what they have.”

Gary Rieschel is a Bay Area collector who became a Vintrust client after a particularly disappointing showing of some of his 1982 Bordeaux. “I hadn’t been drinking them over the years,” he says. “I was waiting for the right moment.” That moment, when he finally uncorked the bottles, had already passed for some. Now, in addition to the wines he stores at his home and at another location, Rieschel consigns many of his wines, including most of the new releases he acquires, to Vintrust’s temperature-controlled storage facilities in Napa, where the staff can ship any wine to him by next-day air, seven days a week.

Rieschel’s Vintrust database, which he can log into remotely, has a digital image of every bottle in his collection of 9,000, accompanied by their value, ratings scores (if any), and locations. He even records notes and impressions on each wine he tries, which is very useful information for the next time he decides to uncork the same wine. Working with Minucci, Rieschel has fine-tuned his holdings. “Lisa’s been able to point out the ones that aren’t holding up,” he says, “or won’t age in the way [that] I like them.” Minucci has also helped Rieschel collect with an eye toward the future. “I can ask her, ‘Given the wines I have, what are others I might enjoy that would round out my collection?’ ”

While the vagaries of aging wine continue to surrpise, delight, and occasionally disappoint, Rieschel now has more confidence when opening his vintage bottles. “With wine, it’s a fairly expensive learning curve,” he acknowledges. “It’s nice to partner with someone who’s as serious as I am.”

Lisa Minucci’s Tips on When to Open What