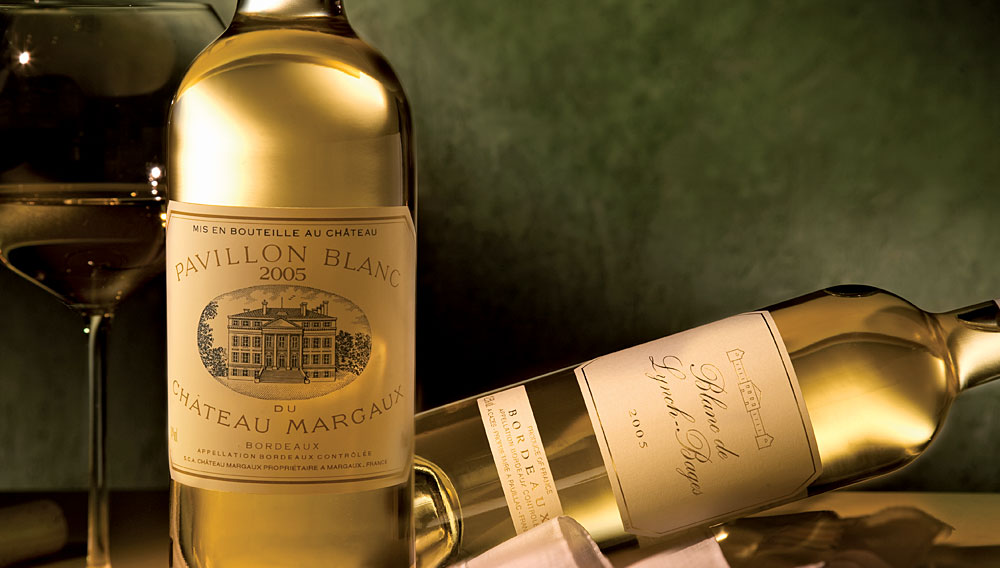 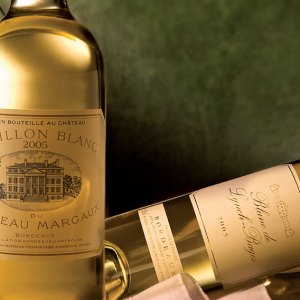 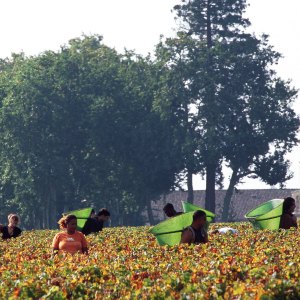 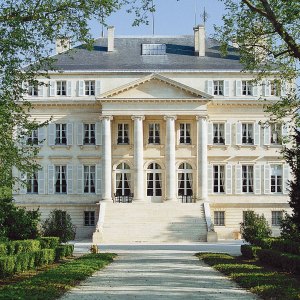 It is a drizzly April morning at Château Margaux, one of the four premiers crus of Médoc, an enclave of largely Cabernet Sauvignon and Merlot vineyards that carves a crescent northwest of Bordeaux city along the swales of the south bank of the Gironde River. The elegant, tree-lined estate sits on the edge of the village of Margaux, its vineyards sloping gently down toward the river.

Just inside the château’s large reception area, a couple dozen wine merchants and journalists mill about, each speaking his or her native French, Japanese, Korean, or British or American English. They are here in Bordeaux for the primeurs, or barrel tastings, an annual early-spring event during which thousands of sellers, collectors, and writers descend on this region in southwest France to be entertained at the châteaux and to sample the young wines of the previous vintage.

Over to one side of the room, near a large table lined with bottles and crystal glasses, a small group of us are poured the barrel sample of the estate’s 2007 Pavillon Rouge. Next our glasses receive the grand vin, the 2007 Margaux, as the histoire of the vintage recounts in French and then English. Finally, the third wine is distributed among our ranks, the 2007 Pavillon Blanc—and it is a charmer. In its futures presentations, the château defies traditional protocol and always pours the white after the reds have been tasted. A television crew from the BBC, with a boom microphone and a sturdy-shouldered cameraman, arrives from the middle of the room to record our impressions of the wines.

From the Pavillon Blanc, which consists only of Sauvignon Blanc, the nose picks up meadow flowers and tones of yeastiness from the settled lees. The complexity grows on the palate: more flowers and fresh apricots and touches of chalkiness, with great length and intensity, not to mention a soupçon of tannin. Even at this early stage, barely five months old, the wine leaves no doubt that it will mature into greatness.

A few Bordeaux châteaux—from grands to petits—produce white cuvées that are much rarer and far less heralded than their reds. The best-known of these are the cluster of properties in the Pessac-Leognan neighborhood of Graves, including the premier cru Château Haut-Brion. The wines are mineral-heavy blends consisting primarily of Sauvignon Blanc, which is often blended with Semillon and Muscadelle as well. But the rarest come from Médoc, where a dozen or so châteaux produce small amounts of stunningly beautiful white wines.

château margaux produces only 20,000 to 25,000 bottles of Pavillon Blanc annually, says managing director Paul Pontallier, who has been at Margaux for the last 26 years. “Last year we used only 60 percent of the crop,” he says. “The rest we sold off.”

Margaux began making a white in the early 20th century; in the 1920s it officially released its first bottling of Pavillon Blanc. Pontallier notes that Margaux has a plot of almost 30 acres of white grapes, planted entirely with Sauvignon Blanc, nearly two miles west of the château. “We may have been able to make a great Semillon as well,” he says, “but only Sauvignon Blanc is mentioned in our historic records, and we don’t see any great reason to change things now.”

The process that brings the grapes from the vineyard to the bottle is a simple one, according to Pontallier. “We let the grapes get as ripe as possible,” he says. “I personally don’t like the flavors of Sauvignon grapes that are not very ripe.” Because the vineyard soil is poor—ideally so—its yield is low: 6,178 liters per acre. “The plot is a late-ripener,” Pontallier says, “and we carefully select grapes and generally harvest two or three times.”

The picked grapes are quickly transported to the temperature-controlled cellar. There they are pressed, and then the juice settles for 48 hours before it is put into small oak barrels to begin fermenting. After two to four weeks, the wine from half of the barrels is racked and returned to the cleaned casks, while the other half is left on its lees to increase its richness. Both wines then remain in the barrels for another eight months before they are blended, filtered, and bottled. To preserve its bright acidity, Pavillon Blanc is not subjected to the softening secondary, or malolactic, fermentation.

As it does with its reds, Margaux sells all of its approximately 1,500 to 2,000 cases of white as futures, allocating them to the various négociants, or shippers, when prices are set in the weeks after the April tastings. The négociants in turn sell the cases to importers and distributors as futures, and the wines gradually work their way to collectors and other consumers. The futures price for the 2007 Pavillon Blanc, which will arrive in the United States next year, ranges from $140 to $160 per bottle. Should you acquire a bottle or a case, Pontallier recommends that you exercise patience before reaching for a corkscrew. “Any wine that is great has to show its ability to improve with age,” he says, adding that Pavillon Blanc peaks at about 15 years and remains very drinkable for many more. He says that the 1989, ’93, and ’95 vintages all are now in their prime, as is at least one earlier vintage: “I had a bottle of the ’83 recently, and it was wonderful.”

if you travel about nine miles northwest from Château Margaux, along D2, Médoc’s meandering two-lane country road, you come to the commune of Saint-Julien—and, if you venture a ways from the road, Château Lagrange, which is classified as a third growth, or troisième cru. It is one of the largest properties in Bordeaux, but it lies distant from D2 and is a bit difficult to locate, so many tourists never see its spectacular woods, gardens, and manor buildings.

Château Lagrange underperformed during much of the last century. Its facilities fell into disrepair, the grounds were neglected, and the wines became unworthy of their classification. Then in 1983 the Japanese wine-and-spirits company Suntory purchased the property and, at the recommendation of renowned Bordeaux viticulturist Émile Peynaud, hired Marcel Ducasse, a former student of Peynaud’s at Bordeaux’s Institut d’Oenologie and the former technical director for the Institut Technique de la Vigne et du Vin in Languedoc-Roussillon.

Suntory gave Ducasse a generous budget (an estimated $40 million, which was more than four times what Suntory paid for the property) and charged him with restoring the buildings, the natural beauty of the property, and the reputation of the wines.

Ducasse brought an appreciation of white Bordeaux to Lagrange, and about 10 years after his arrival he grafted about 10 acres of red grapes over to a traditional proportion of Sauvignon Blanc (60 percent), Semillon (30 percent), and Muscadelle (10 percent). From those grapes he blended a new wine that he named Les Arums de Lagrange. When he retired as Lagrange’s general manager last year, Ducasse turned over the reins to Bruno Eynard, whom he hired in 1990.

Eynard, who helped transform the vineyard from red to white, believes that the way to manage a vintage is to manage the vineyard early on. “We do green harvest [i.e., the removal of some bunches of grapes to improve the quality of those that remain], of course, almost every year for the Muscadelle and the Semillon,” he says. “Lots of deleafing is important, but not too early because the sunshine can damage the grape skins. Starting at the end of July, we deleaf on only the south side of the vine rows,” which do not receive the strong afternoon sun. “We have to be very accurate about the picking of the whites,” he continues. “Too late, and the alcohol is too high; too early, and the acidity is too high.”

The Lagrange cellar regimen, which is similar to Margaux’s, places special emphasis on the choice of yeast. “Yeast selection is more important with white wine than it is with red,” Eynard maintains. “With reds, you’re only looking for fermentation, but with whites, yeast can give you the right aromas.” Like Margaux, Lagrange eschews malolactic fermentation. “I want a creamy wine,” Eynard says, “but creamy on the palate, not creamy for the taste. It’s not milk.”

Eynard says that the Médoc white wines tend to peak earlier than those produced in Pessac-Leognan or Graves, contending that his region’s whites reveal more exotic flavors at earlier ages. The 2007 Les Arums, which is priced at about $20 a bottle, supports his claim. When I tasted it recently after it was bottled, the wine had delicious white-peach flavors, including the tanginess of peach skins, with a taut acidity.

in contrast to the creation of Les Arums de Lagrange, which was part of a corporate-sponsored makeover, Blanc de Lynch-Bages emerged more serendipitously. “My grandmother, Andrea Cazes, had a vineyard planted with local white varieties because she wanted to have table grapes,” says Sylvie Cazes-Régimbeau of Château Lynch-Bages, which is located in the Bordeaux town of Pauillac. Cazes-Régimbeau oversees the château with her brother, Jean-Michel Cazes, and nephew Jean-Charles Cazes. (The family also operates the property’s Cordeillan-Bages hotel and restaurant, a member of the Relais & Châteaux group, and has developed the Bages village behind the winery to include shops, restaurants, and artists’ ateliers.) “In the 1980s we began to experiment with making white wine for the family and friends, and they encouraged us to produce it commercially.”

The first official vintage for Blanc de Lynch-Bages was 1990. The grapes come from the western part of the property, where the soil contains some clay and sand and less gravel than other parts. The annual production is about 2,000 cases—roughly the same volume as the whites from Lagrange and Margaux—and the wine is generally priced from $50 to $75 per bottle

“Since we use the same grapes as Graves, our wine is not that dissimilar except, because of the soil here, it produces wine with more volume, roundness, lots of elegance,” says Cazes-Régimbeau, echoing Margaux’s Pontallier. The Blanc’s intense fruitiness, finished by a chalky cream, proved a fitting pairing with Château Cordeillan-Bages’ shiitake soup with quince mousse and king crab with almond.

Cazes-Régimbeau explains that the winery stirs the lees, a technique known as battonage, and that the wine remains in barrels for a year before it is bottled. “There isn’t so much of it,” she says of the wine, “but we try to get some of it to each of our markets.”

Premium Médoc whites are indeed rare. Lagrange’s Ducasse counts only 15 châteaux producing such wines, and he says that white-grape vines grow on less than one percent of Médoc’s total vineyard acreage. Besides Margaux, the only other premier cru officially producing a white is Mouton Rothschild, which sources its Aile d’Argent from 10 acres originally planted during the 1980s. Other cru châteaux do make white wines, but only in very small amounts and only for their own pleasure. But considering the success that Lagrange and Lynch-Bages have enjoyed since their relatively recent entry into the white-wine market, it is reasonable to assume that other Médoc properties will follow them.

Still, you might ask why any of the Médoc châteaux should bother making white wines when their reds are so good. To that question, Margaux’s Pontallier has a ready response: “No one ever asks why Burgundy produces both red and white wines.”

For a list of exceptional white Médoc wines that are currently available, go to