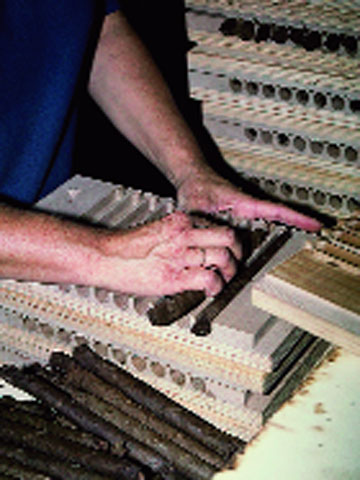 It is amusing when smokers, eager to display knowledge of their hobby, pontificate about Canary Islands cigars made with the islands’ tobaccos. The truth is, tobacco has not been grown in the Canary Islands for more than a century. What these pundits are actually savoring are cigars rolled in the Canaries with leaf imported from the Dominican Republic, Cuba, Indonesia, Mexico, Honduras, and Brazil. To be fair, the mistake is easy to make: By international law, boxes of cigars are marked with the place of manufacture, not the origin of the tobacco.

Furthermore, the islands do have a long history of tobacco and cigar production, which was directly related to their location in the Atlantic Ocean. The Canaries form a sovereign Spanish province about 800 miles southwest of the Spanish peninsula. The handful of islands is actually closer to Africa, with the easternmost island just 67 miles off the coast of Morocco. Because the Canaries lie in an ocean current that flows south from Spain and curves west toward the Americas, they became a favored supply port, and in 1492, this trade route led Columbus to Cuba. Soon after, many of the islands’ farmers left for Cuba’s tobacco fields. Ships returning to the Canaries not only carried cigars, but also tobacco and seeds.

Only three of the seven largest islands are steeped in tobacco lore, however. The largest, Tenerife, now enjoys a lucrative tourist industry; Gran Canaria features lush Jurassic Park–like peaks in the north and arid deserts to the south; and La Palma, the most fertile, lies under a sky so clear that a number of European observatories dot its mountains.

By the 18th century, farmers in La Palma had developed a strain of tobacco characterized by a delicately sweet aroma and taste. Even Havana’s cigar makers used the new Palmera leaf (until the Castro regime) to tame the strength of their tobacco. Perhaps more important, Palmera was resistant (but not immune) to blue mold, a crop-destroying fungus. Unfortunately, bales of imported Cuban tobacco inadvertently introduced the spores to the Canaries, and the disease not only ravaged the susceptible Havana leaf, but it also destroyed La Palma’s farms. At about the same time, Tenerife’s plantations were replacing tobacco with a more profitable crop: bananas. By the 1900s, Canary Island–grown tobacco had ceased to exist. In the early 1960s, Fidel Castro indirectly revitalized cigar making in the Canaries. When he nationalized the Cuban cigar industry, many cigar-making families fled to their ancestral homeland. The U.S. embargo on Cuban goods then helped cigars rolled in the Canary Islands to establish a following in the United States, filling the Cuban void. However, the prosperity of the islands’ rollers was short-lived. In the 1970s, Spain increased export taxes on cigars and reduced tobacco-growing subsidies, forcing the Cuban expatriates to shift their cigar-making bases to Central America and the Caribbean, and leaving the Canaries with just a handful of brands. Today, the most recognized brands are Peñamil, Condal, Vargas, Goya (sold in the United States under the name El Greco), and La Regenta, which makes a non-Havana version for the U.S. market.

Although cigars from the Canary Islands are not as well known as those from the Caribbean and Central America, they are remarkable for two reasons. Centuries of experience have made the Canarians master blenders and experts on creating tobacco flavors. Also, they roll the cigars using traditional Cuban techniques, such as forming each filler leaf into a cylinder as it is bunched to ensure a smoother draw. The meticulous methods are evident in the production numbers: Caribbean rollers each produce between 350 and 500 cigars a day, while the factories in the Canary Islands usually limit top rollers to just 150 cigars per day.

This knowledge and experience has helped fuel a quiet tobacco-growing movement that began in 1999. At the time, cigar mania in the United States had faded, but the number of cigar smokers was greater than ever. Also, a smaller cigar boom was taking hold in Europe. The timing seemed appropriate.

In Tenerife, the government and cigar manufacturers are reestablishing tobacco fields despite a land and water shortage caused by massive development and tourism. In La Palma, a wild tobacco plant has been discovered that may be the lost Palmera strain. If that is true, it might be the basis for a new mold-resistant leaf.

Earlier this year, bales of Palmera, traditionally used as filler, hung curing in government warehouses, and new seedlings are growing in controlled settings. The Vargas Reserva cigar already uses some of the rare leaf. A farmer demonstrated how the versatile tobacco, depending on how and when it is primed (picked), could create a Canary Islands puro—a cigar in which the wrapper, binder, and filler come from one country. Cigar smokers appreciate puros, in part, because not every country can produce them. Growing all of the components of a cigar requires different types of soil and, often, different climates and conditions. Some countries can grow one or two components, but only a few, including Cuba, the Dominican Republic, and Nicaragua, are able to produce all three.

In a back room at a cigar factory in La Palma, an old Cuban sits methodically rolling cigars. The wrapper, binder, and filler are all the same dark, oily tobaccos.

He gives a weathered smile and offers one of the cigars. It smells deliciously sweet.

For the Canary Islands especially, a puro is an extraordinary statement. The cigar demonstrates that the islands are intent on returning to their tobacco-growing past and that they can compete with the industry’s leaders.

In Tenerife’s ancient city of La Laguna, a 19th-century cigar factory has been rebuilt to capture its former glory. You would not be able to tell that a lapse in production had ever occurred. The operation produces only two brands, just as it once did. But neither of those two brands, Candela and Uncanca, existed before the 20th century. The Dos Santos factory, which makes La Regenta, is modern in both appearance and operation. For example, the cigars are frozen for three days to prevent a beetle infestation, and a long, thin, and mild cigar called Yvette is made just for women. At the El Guajiro factory, every cigar is machine made, but the inspection process rivals many premium cigar operations elsewhere.

While the Canary Islands may be positioning themselves to become a cigar-making player again, the task will not be easy. The islands are former volcanoes that rise steeply out of the ocean and leave little level ground. Most of the tobacco is growing on terraced hillsides, which any farmer knows is more costly and time-consuming to cultivate than flat land. Meanwhile, the government, which also has a stake in the success of the tobacco-growing initiative, is investigating the possibility of desalinization to alleviate the water shortage, but that, too, is expensive.

“The Barrio de la Perdonna in Orotava was once the largest tobacco plantation in all of Tenerife during the 18th and 19th centuries,” says Eduardo Pintado Mascareño, the director of Proexca, the agency responsible for the islands’ exports. “Now it is better known for its wine, but hopefully things will change.”

The Canary Islands’ immediate goal is to increase exports—primarily to Germany and the United States—still using imported tobacco. The long-term hope is that the Palmera strain will eventually regain its popularity. “For now, the plan is to try and recover Palmera so we can cross it with other tobaccos, such as Havana 142, Sumatra, and Connecticut Shade, to develop a mold-resistant variety,” says a grower in La Palma. “But unfortunately, there are very few crops [of Palmera] at the moment. There are only 30 farmers planting [about 30 acres].”

The process from seed to properly aged cigar requires three years, therefore the Canaries must produce sufficient quantities of the crop to make farming tobacco feasible. Yet for some Canarians the bottom line is more than just a matter of profits and losses. One farmer was asked how long he thought it might be before the tobacco crop would be profitable. He looked matter-of-fact and replied, “The cultivation of tobacco is not only for money; it is a matter of culture as well.”