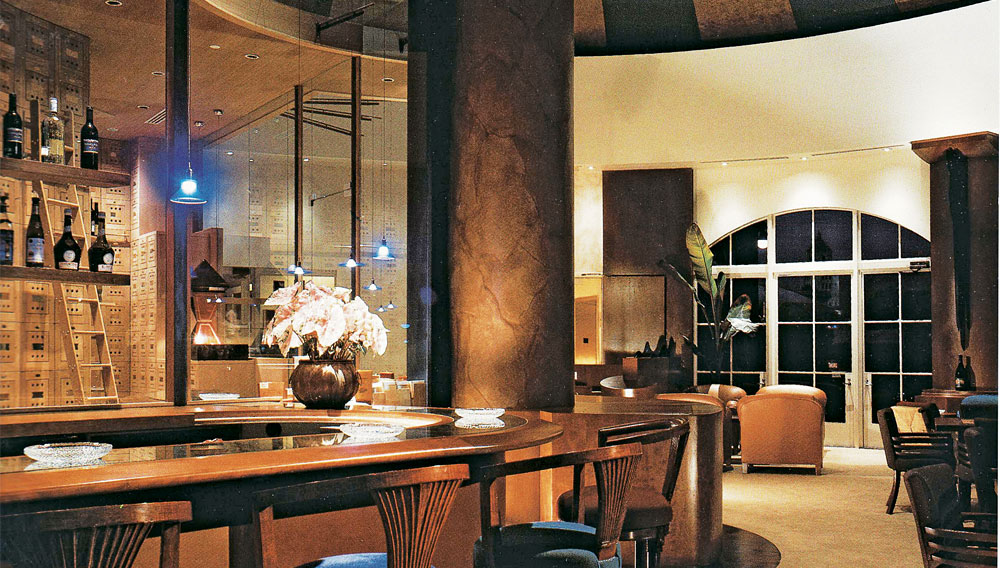 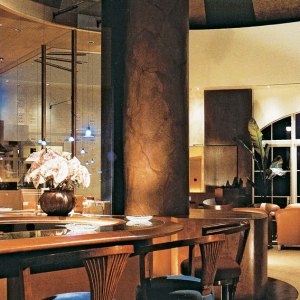 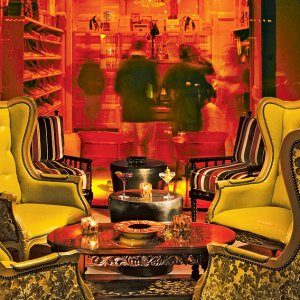 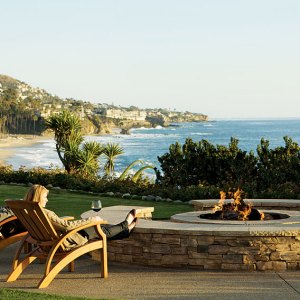 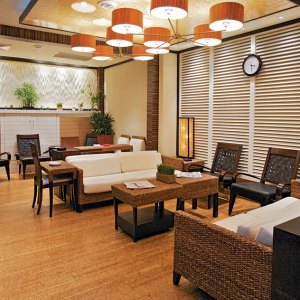 Although men may have smoked together since the first tobacco leaves were rolled and torched with fire, the proper cigar lounge was a 19th-century invention. Indeed, in spite of Queen Victoria’s disapproval of tobacco, it became a cherished ritual for like-minded gentlemen to bond over snifters and cigars in a well-appointed space. The tradition blazed anew during the cigar boom a decade or two ago, but escalating cigar prices and tobacco shortages, not to mention the economic downturn, snuffed out most cigar bars and clubs by 2008.

But over the past two years, new takes on the cigar lounge have begun appearing around the country. Partly, it is a development related to the cocktail trend, which cultivated a serious appreciation for fine spirits, classic drinks, and the right atmosphere to enjoy them. But it also is a reaction to modern-day Queen Victorias: There are 27 states and countless municipalities enforcing antismoking laws, thus a growing need for safe havens.

The cigar lounge is being rekindled by a combination of classic clubs and creative new sparks. We puffed our way through them—eliminating the ordinary, the smoking rooms attached to cigar shops, the lone bench in a hotel garden—to find the best spots around the country for a smoke. Each of these places offers something exceptional: exceedingly rare cigars or spirits, or the chance to have a smoke on a bluff above the Pacific, in an under-the-radar airport lounge, after a relaxing spa treatment, or with a finely prepared meal. Victoria herself might be tempted.

Rocky Patel, the energetic personality behind the tobacco brand, has created a cigar lounge that pulses to a DJ’s beat. The decor is a sexy mix of Cuban, Moroccan, and Indian styles, with couches and chairs covered in exotic skins. Everything is bathed in the warm glow of hanging glass lanterns—no two alike. Wrap­around bars and seating areas are arranged for conviviality rather than for privacy, and a raised VIP area is reserved for locker holders and special guests. Multiple bars offer more than 50 premium Scotch whiskies—from Ardbeg Cask Strength Uigeadail to Compass Box Hedonism—plus bourbons such as Pappy Van Winkle’s Family Reserve 20 Years Old and cult-favorite Irish whiskeys like Redbreast 15 Year Old. A list of 150 wines, including Cham­pagnes and ports, is also available.

The cigar list includes virtually every version made by Rocky Patel, plus special editions rolled exclusively for Burn by Fuente, Padrón, La Flor Dominicana, and Ashton. Preembargo Havanas are also stocked, and all of the selections can be found in a spacious walk-in humidor where guests can peruse cigar-box-lined walls and a cigar counter. Large, private cigar lockers are also available for rent.

The staff is skilled at clipping and lighting, should guests desire assistance, and a full-service menu is on offer from the Capital Grill restaurant next door, whose servers will bring dinner to Burn customers and set it up tableside, with linen and china from the restaurant. Naturally, smoking is allowed at the table—one of the few places in Florida where one may do so.

Lockers: Not available. Premium cigars including those from Davidoff, Fuente, and Rocky Patel are sold at Treasures, the Lobby Lounge, and the Studio restaurant.

Perched on a scenic bluff overlooking the Pacific Ocean, this is one of the few cigar-friendly luxury resorts in America. That is primarily because James Bermingham, Montage’s vice president and managing director of the Laguna Beach property, is an avid cigar smoker and takes pride in catering to cigar-smoking guests. Besides providing ashtrays and matches in the rooms of cigar-smoking guests, “we’ve created some very special areas where guests can enjoy a cigar,” Berming­ham says. Among them is a fire pit surrounded by semicircular stone seats and Adirondack chairs on a lawn above the ocean. (Another fire pit, located outside of the resort’s acclaimed formal restaurant, Studio, is also available to smokers.) The Lobby Lounge has a smoking patio, and cigars are also welcome at private dinners, in the poolside cabanas, and on guest room patios, with the surf crashing on the rocks below.

But the resort’s most innovative cigar offering is the Gentlemen’s Sur­render at Spa Montage. This completely personalized experience is one of Mon­­tage’s Surrender Retreat programs (in which guests “surrender” themselves to the therapists for well-being). After a private consultation to determine goals, body type, and duration of the treatment, therapists recommend a plan that may include a private workout, a spa treatment, an afternoon of golf, a Thalassic beach walk, a yoga session, or a cooking class with Studio executive chef Craig Strong. The experience might end at the oceanfront fire pit with a sundown cigar paired with a Cognac or port selected by the resort’s sommelier.

Because Surrender sessions involve so many variables—programs can last anywhere from a few hours to a few weeks—costs vary widely. But as an example, a one-day retreat that includes a night in an oceanfront room, a private yoga session, and a cigar and Cognac at the fire pit would be about $1,300.

Generally speaking, you have as much chance of lighting up a cigarette in an international airport as you do carrying an Uzi through the metal detector. And even where nicotine-reeking “smoking enclosures” are provided, those who inhabit them are often looked upon as oxygen-stealing pariahs. Cigar smokers, of course, are rarely seen lighting up at airports, as cigar smoking is generally conducive to more socially inspired surroundings.

But the Graycliff Cigar Company, founded by the same family that owns the five-star Graycliff Hotel & Restaurant in Nassau, Bahamas, has opened two well-appointed cigar lounges in the Nashville International Airport—the only airport in the United States that has allowed Graycliff to convert an existing smoking room into a more luxurious smoking Divan. The lounges, located at gates B9 and C10, feature modern decor, subtle lighting, flat-screen TVs, and Wi-Fi accessibility. The secret to this smoke-friendly coup for travelers—and the reason Nashville granted approval for the Divans—is a special air-filtration system for each indoor lounge.

Guests are offered a selection of Graycliff, Gurkha, and Toraño cigars, plus Graycliff coffees, chocolates, and gift items. The airport has not yet permitted food or alcoholic beverages to be served (those items are coming, the company says), but bottled water is available. The Nashville lounges join the Graycliff Boutiques & Divans in Nassau’s Lynden Pindling Interna­tional Airport, as well as lounges at the Graycliff Cigar Company and the Graycliff Hotel & Restaurant.

Lockers: $275 per month (The waiting list is six months to a year.)

This is the grande dame of cigar clubs. Opened in 1995, it was not the first private cigar club, but today it is the most prestigious. It also is one of the few places in the city where cigars may still be smoked. A-list members reach the third-floor club via a private elevator, which may be accessed from an underground parking structure or through a clandestine reception area within the On Canon shopping arcade. (Cameras are not allowed inside the club.) Upon exiting the elevator, members and their guests (others are politely but firmly turned away) enter a spacious room that offers dramatic views of the surrounding city and the Hollywood Hills. A huge, cigar-shaped pillar dominates the space, which also includes a glass-walled, cedar-lined walk-in humidor containing roughly 350 lockers; some of the loftiest “keeps” are accessible only by a rolling wooden ladder.

Outside the humidor, a glass-topped counter offers luxury accessories by Dunhill, S.T. Dupont, Davidoff, and Elie Bleu, and some of the rarest cigars, including OpusX and Padrón, for this is a club in which members are often proud to show off their bands. A bar stocked with premium spirits lines one wall of the expansive room, where deeply cushioned chairs and comfortable surroundings make it especially conducive to conversation and smoking. A private meeting room can be reserved, and a full-service lunch and dinner menu is catered by Via Alloro, Giacomino and Tanino Drago’s restaurant downstairs. There are also two outside patios for smoking and dining.

During the day the atmosphere is discreet, with private discussions that are meant to be kept private. Night brings a more relaxed and convivial crowd, with the large-screen TVs sometimes competing for attention. Occasionally members exchange nods of recognition as certain high-profile guests step off the elevator, and during the months when major movies are released, nominations are made, and awards are given, there is a heightened energy that leaves no doubt: This is a club motivated by Hollywood.

Practically every size and shape of Macanudo, Cohiba, Partagas, La Gloria Cubana, Punch, Hoyo de Mon­terrey, and CAO cigars are offered, including some that are not available anywhere else. The club’s dress code requires collared shirts for men, in keeping with its mostly business clientele. For many, “Club Mac” serves as an afterwork decompression zone, or as a genteel spot to discuss business over a good smoke. But thanks to a state-of-the-art ventilation system, nonsmokers also stop by this classic Upper East Side getaway.

The only cigar lounge licensed by the Arturo Fuente family—makers of A. Fuente, Don Carlos, Hemingway, Diamond Crown, Cuesta-Rey, and OpusX—this cigar-smoker’s sanctuary in the new wing of the Forum Shops at Caesars Palace is unlike any other cigar lounge in Las Vegas. In fact, it is more akin to what one would expect to find in Habana Vieja, with a colorful bar reminiscent of El Floridita and Cuban jazz wafting throughout. And yet, this is definitely Fuente country, with a mixture of Cuban and Dom­inican styles, and a gated walk-in humidor where one will find the most complete assortment of Fuente cigars anywhere, including the Casa Fuente, a brown-and-gold-banded cigar that can only be purchased here. Smokers—or their emissaries—visit just to acquire a box.

The tables and chairs on the lounge’s patio are almost always occupied, which keeps Casa Fuente’s bartenders and servers busy. Although the bar is justifiably known for its mojitos, insiders ask to see the Black List, a limited, under-the-counter offering of some of the rarest spirits, including Jose Cuervo 250 Aniversario, Glenfiddich 40 Year Old, and Louis XIII. For a winning combination, try a Fuente OpusX Perfecxion No. 2 with a Macallan Fine Oak 30 Year Old.

THE CIGAR CLUB AT THE RITZ-CARLTON, ST. LOUIS

Cover charge: None for members and hotel guests; $25 for others

Located in Clayton, a fashionable suburb of St. Louis, this is the only remaining Ritz-Carlton cigar club. It has survived in spite of the city’s strict no-smoking laws, thanks to the club’s dedicated members and staff. An antismoking group did manage to prohibit members from lighting up at last year’s annual black-tie dinner (because the affair was held in a hotel ballroom), but cigars are still enjoyed during club activities that include televised sports events, whiskey tastings, and dinners in the club’s private dining room, a cozy wood-paneled space with a well-stocked humidor. Members receive a 10 percent discount on deluxe guest rooms (purchased at the corporate rate) and on food and nonalcoholic beverages in the hotel’s restaurants. The membership fee includes the $350 cost of the black-tie dinner, which this year will once again come with the pleasure of smoking a cigar.

For more on cigar bars, see “Where There’s Smoke” in this month’s issue of The Robb Report Collection.