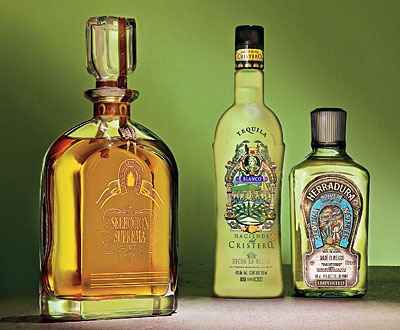 Working his coa—a long-handled knife with a flat, moon-shaped blade—a jimadore hacks swordlike leaves from agave plants, revealing in each a 60-pound heart that resembles a massive pineapple. Dark from years of exposure under the hot Jalisco sun, the harvester ties the last of 10 of the piñasto a donkey before trotting the animal across the field to where a flatbed truck is waiting. He will repeat this exercise several times over the next few hours, harvesting about a ton of the agave hearts before his workday ends at noon.

Of the roughly 200 agave varieties that grow in Mexico, only a fraction are deemed worthy to make mescal, and only one—Agave tequilana Weber, the blue variety—can be the source of the mescal known as tequila. The succulent thrives in the volcanic soil in the western state of Jalisco, where an estimated 200 distilleries churn out Mexico’s nearly 700 varieties of tequila. The field being harvested by the jimadore is one of 2,000 tracts owned by Casa Herradura, which has been producing tequila since the days of New Spain. Today, Herradura (pronounced err-a-DU-ra and meaning “horseshoe”) has about 30 million blue agaves planted in the Jalisco lowlands, and the company sells nearly 400,000 cases of tequila per year.

Until recently, these figures made Casa Herradura one of the largest family-owned distilleries in Mexico. But in August 2006, American liquor conglomerate Brown-Forman acquired Herradura for a reported $876 million. Neither company will reveal much about their plans for the distillery, although both claim that Herradura’s emphasis on traditional production methods will remain unchanged, much as it has throughout the tequila house’s 200-year history.

Two armed guards stand before iron gates at the Casa Herradura estate in the village of Amatitan. Behind the gates are immaculately maintained cobblestoned roads, fruit gardens, shaded patios, and streams, set at the base of the dormant Volcan de Tequila. Throughout the 12-acre compound, the air is heavy with scents of citrus, sweet cider, and baked yams, the latter of which is most prevalent outside building No. 4, where stone ovens slow cook agave for 50-hour periods.

Elsewhere on the estate, Herradura maintains a stately adobe home, a chapel, horse stables, workers’ quarters, one of Mexico’s largest private libraries, and a retired factory that some believe predates the company. “You won’t find another distillery like this,” says Herradura tour guide Jose Cortez as he enters the dimly lit and musty San Jose del Refugio building. The factory’s two-ton crushing wheel, made from volcanic rock, stands as a relic from tequila’s past. Powered by both man and ox, the tahona, or “big foot,” rotated around a circular pit, crushing out the precious juices from baked piñas. Workers retrieved the nectar from the pits and deposited it, by way of wooden buckets, into large fermentation holes in the stone floors.

Researchers from the National Autonomous University of Mexico (UNAM) recently visited the San Jose del Refugio factory and determined, based on its architecture and primitive materials, that it may date as far back as 360 years. If accurate, the age would make the Herradura building one of the first distilleries in the Americas. (The first recorded mescal distillery was Hacienda Cuisillos, established about 1600 in Jalisco.) However, no one is certain when—or by whom—San Jose del Refugio was constructed. “There are some things,” says Cortez, his lowered voice echoing against the cavernous walls, “that no one knows. It’s a mystery.”

What is known about Casa Herradura is that a group of priests founded the distillery as Hacienda del Padres in 1802. More than a century later, during the Cristero Rebellion that followed on the heels of the Mexican Revolution in 1926, the estate helped hide priests and nuns who were being persecuted by the country’s newly formed government. The hacienda’s proprietors, Aurelio Lopez Rosales and his sister Maria de Jesus Rosales, offered their ancient factory as a safe haven to the fugitives, but eventually the Rosaleses were forced to flee the country themselves. Before departing, they deeded ownership of the hacienda to their cousin David Rosales Cuervo (who was related to the owners of the Cuervo tequila company). Casa Herradura prospered under Cuervo’s watch, thanks at least in part to entertainers Bing Crosby and Phil Harris, who tasted the tequila on a trip to Mexico in the 1940s and arranged to distribute the spirit north of the border.The tequila Crosby and Harris consumed on vacation in Mexico is more or less the same base spirit that Casa Herradura produces today: a 100 percent blue agave distillate made without the addition of yeast. In the 19th century, distilleries made tequila using natural yeasts, a process that required from four days to three weeks to convert the sugars to alcohol. Because human skin hosts a variety of yeasts, it was not uncommon for workers, wearing nothing more than the suits they were born in, to jump into vats of the brown-colored musto to help speed the process.

Today, nude men have been replaced at distilleries by packaged yeast that accelerates fermentation to about 24 hours. Herradura, however, does not add yeast to its must. Instead, the company relies on yeasts that are found naturally in the air, and its fermentation process lasts about five days.

Though Herradura employs traditional methods, it also is an innovator. Until 1964, all tequilas were crystal-clear blancos and briefly aged silvers, exhibiting little if any influence from wood casks. “The containers most used for storage were Mexican oak barrels, but in order for the wood not to influence the distillate, it was coated with beeswax,” says Miguel Cedeño, Herradura’s master distiller. “The convention then was to store, not age.”

Based on what they knew of the Cognac industry, brothers Jose Guillermo and Pablo de las Pena, the sixth generation to oversee Casa Herradura, began aging some of their tequilas in wood casks. Today, Herradura uses new toasted American oak to age its reposado (11 months), añejo (25 months), and extra añejo (five years) varieties.

Each of Herradura’s aged tequilas is a wonderfully complex spirit, with smoked wood and caramel flavors that the company maintains precisely from bottle to bottle, year to year. The secret to this consistency, says Cedeño, resides in the fields. “We’ve been using the offshoots from the same agave plants for more than 100 years,” he explains.

One presumes that, even under new ownership, this family of blue agaves will remain at the heart of Herradura.

A Taste of Tradition

All made from 100 percent blue agave, Casa Herradura’s tequilas range from peppery younger varieties to aged distillates with tastes of cinnamon, vanilla, and leather.

This 40-proof, slow-distilled blanco is extraordinarily smooth and spicy. Dedicated to the rebels who fought in Jalisco’s Cristero Rebellion from 1926 through 1929, the tequila is a favorite among purists who enjoy a good sipping spirit with vibrant agave flavors. ($45)

Earthy, clean, and very light amber in color, this silver tequila, aged in wood for 40 days to smooth out the flavor, exhibits spice, citrus, and floral overtones on the nose and cooked agave, tangy citrus, and wood notes on the palate. ($45)

This medium-weight, golden-colored añejo is aged for 25 months and presents a sweet aroma that is reminiscent of dried fruit, chocolate, and leather. The flavor consists of vanilla, cinnamon, and butter. ($55)