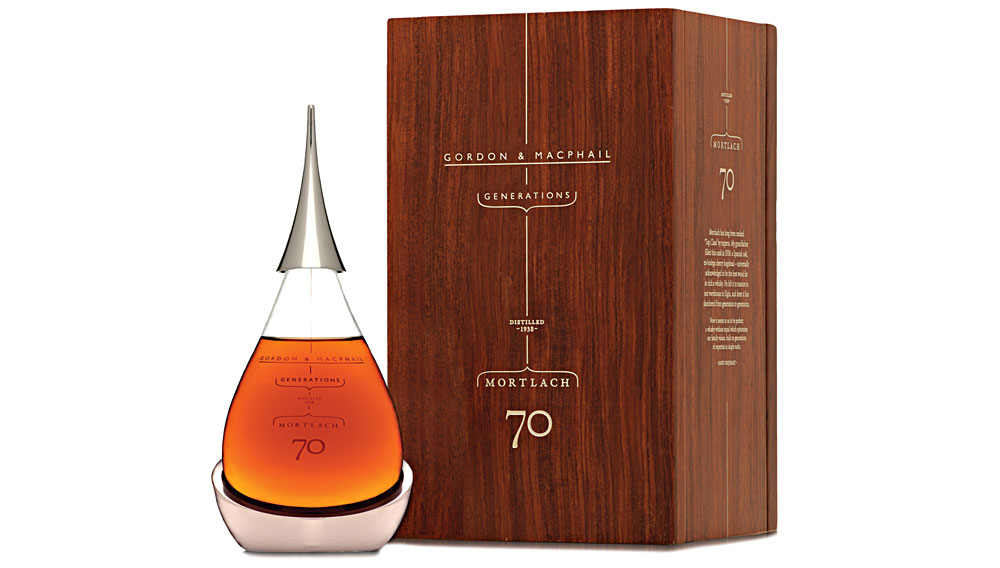 We begin to age from the moment we are born. This law of nature also governs the life cycle of single-malt Scotch—those often prized whiskies that have been pot-distilled in Scotland by a single distillery. For these popular spirits, “birth” occurs when the distillate is poured into oak casks, where it must remain for a minimum of three years—though no distiller with a dram of pride would release so young a whisky.

Almost immediately, the once-clear distillate takes on a faint hue and a thread of flavor begins to emerge from the container, which may be a charred white-oak ex-bourbon barrel from America, a sherry cask from Spain, or one of the more exotic barrels from eastern Europe or Asia with which some distillers have begun to experiment. Throughout the maturation process, the spirit requires periodic monitoring—usually by nosing the aromas (and sometimes tasting the distillate) every three to six months to track its progress toward its optimum flavor profile. That peak will be reached only when the distiller judges the whisky’s flavors, concentration, and alcoholic proof to be in ideal balance.

Because the British government sets no maximum aging requirement for single-malt Scotch, warehoused spirits could theoretically be cellared for centuries. Excessive aging, however, eventually degrades quality. With age, a whisky’s alcohol content diminishes; once that level drops below 80 proof, the whisky can no longer legally be called Scotch. Also, the spirit loses an average of 2 percent of its volume each year to evaporation; consequently, if a barrel is cellared long enough, it will become empty. Moreover, Scotch whisky left in a barrel too long can begin to extract bitterness from the oak. For these reasons, ultra-aging requires a careful balance between whisky and cask.

“The cask is as important as the distillation,” says Michael Urquhart, who, with his brother David, is a joint managing director of Gordon & MacPhail, a family-owned independent bottler of wines and spirits in Scotland since 1895. “The color comes from the cask, as does 50 to 60 percent of the taste. Beginning in the 1980s, we started having casks made to order, specifying the type of wood, along with the thickness and length of the staves. That way, we can match the style of the cask to the style of whisky, whether light, medium, or heavy.”

Despite such detailed management, what transpires within the dark confines of the barrels remains a mystery. No two whiskies ever age in precisely the same way—even if they come from the same batch of distillate and go into similar barrels. “Each cask is an individual,” says Richard Paterson, The Dalmore’s master blender. “I had two oloroso-sherry hogsheads [large oak casks holding 63 gallons], numbers 1781 and 1782. Both had been filled with whisky that was distilled on June 7th, 1951. They aged side by side in the warehouse for decades, but as time went on, one began turning into a shrew, while the other had become an absolute lady. But because they both had such great character, in 2010, when they were 59 years of age, I decided to vat them, but did so very delicately, because one of the whiskies was much heavier [in taste] than the other.”

The result—The Dalmore Eos, named for the Greek goddess of the dawn—is an impressive example of the practice of vatting, or combining, two dramatically different older whiskies to produce a perfectly balanced single malt. Released in November 2010 as a limited edition of 20 hand-cut Portuguese crystal decanters (at a price of $20,000 each)—five of which were reserved for the United States—this extraordinary whisky bursts on the palate with chewy toffee, chocolate, and marmalade flavors.

The Dalmore’s repository of the oldest whiskies in the Scottish Highlands enables the distillery to blend some very rare components into its old single malts. The Dalmore 50 Year Old, for example, is composed of whiskies from 1868 (the oldest in the cellars), 1878, 1922, 1926, and 1939—the youngest in the blend and, thus, the one that determines the age designation on the label. This stalwart whisky was bottled at 105.6 proof in 191 handblown 100 ml crystal decanters, priced at $1,500 each, and treats the taste buds to a medley of butterscotch, sherry-soaked fruitcake, and banana.

Age, however, is not the only factor that influences taste. Another 50-year-old whisky, The Dalmore Candela (named after the international unit of measure for brightness and priced at $13,750 per bottle), has a flavor profile quite distinct from that of The Dalmore 50 Year Old, despite the fact that both contain nearly the same vintages of whisky. The primary difference between the two bottlings was the addition of a 90-proof 1951 single malt in the Candela. This lower-proof component altered the taste equation, infusing the Candela with its unique flavors of coffee, ginger, and marzipan.

The individual characteristics of the barrels also contribute significantly to taste. “A lot has to do with the tightness of the grain, which dictates the amount of oxidative aging and breathing the wood will do,” says Dr. Bill Lumsden, Glenmorangie’s master distiller and head of whisky creation. “American oak has a wider grain structure, while French oak is tighter. French and Spanish oak have more leathery, astringent notes, while American oak, in my view, has the most sympathetic range of flavors. There’s much less tannin and more lignin and lactose, which, when they break down, give you vanilla, almond, and coconut flavors.”

This variation is exemplified by Glenmorangie’s latest offering. Pride 1981, a 28-year-old single malt, underwent the distillery’s longest period yet of extra maturation. Years ago, while going through Glenmorangie’s cellars, Lumsden came across whiskies in ex-bourbon barrels that were developing extraordinary depth. He allowed these whiskies to continue aging, thinking they would eventually become Glenmorangie 18 Year Old; but at 18 years, he decided to transfer a small portion of the whiskies to Château d’Yquem casks.

“After two years, there hadn’t been much of a transformation of the whisky in the French oak,” Lumsden recalls. “In year three, something magical started happening inside the barrels, and the whisky started to pick up extra layers of tastes and textures. By year five, it was getting really interesting. And finally, in year 10, which was 2010, I suspected this whisky had probably reached its peak, and if I left it in any longer, some of the spicy, resinous, tannic flavor from the French oak might start to overpower the delicacy of the whisky. So that’s why Glenmorangie Pride 1981 is not a nice round 30 years old. It is 28 years, nine months, and 17 days.”

Non-chill filtered and bottled at a cask strength of 113.4 proof to retain its complexity, Pride 1981 brims with toasted-coconut and marshmallow flavors and displays hints of exotic fruit wrapped in creamy vanilla. Each of the 1,000 Baccarat crystal decanters in wooden presentation chests (300 of which are allocated for the U.S.) retails for $3,600.

Lumsden’s reticence to decant his casks before they reached 30 years raises the question: How long can a single malt be aged and still remain worthy of a snifter? A partial answer came in the spring of 2010, when Gordon & MacPhail unveiled Generations Mortlach 70 Year Old, a Speyside single malt that had been placed in a refilled sherry hogshead on October 15, 1938, by David and Michael Urquhart’s grandfather John. On October 15, 2008, his grandsons decided to empty the cask.

After seven decades of aging, the whisky’s color has turned to a pale, polished mahogany, and its candied bouquet is surprisingly powerful. Despite its extended time in oak, the whisky is not overly woody, but instead yields a rich cornucopia of almonds, nutmeg, and light toasted cedar. Its long, vanilla-laced finish is seasoned with smoke. Just enough of the whisky remained to fill 54 teardrop-shaped 700 ml crystal decanters, each housed in a Brazilian rosewood chest and priced at about $16,500, as well as 162 200 ml decanters priced at approximately $4,100 each.

Gordon & MacPhail surprised and tantalized collectors again on March 3, 2011, when it released a 70-year-old Glenlivet, which had been put into cask in the Speyside distillery’s Warehouse No. 6 on February 3, 1940, just prior to the Battle of Britain. The first-fill sherry butt was later transported from the Glenlivet distillery to Gordon & MacPhail’s warehouse in Elgin, where it remained for another thirty years. When the whisky was finally bottled, it showed heady aromas of leather, vanilla, and citrus, while its spicy flavor profile was laced with dandelions, butternut squash, and hints of dried roses and smoke. The Glenlivet 70 Year Old is offered in a presentation similar to that of the Generations Mortlach 70 Year Old: 100 700 ml decanters priced at about $21,400 each and 175 200 ml decanters priced at approximately $5,700.

These two single-malt whiskies are currently the oldest commercially available, but still older spirits are lurking in distillery warehouses. Of course, most of these are too scarce to be used for anything other than occasional top-dressing for super-premium Scotch blends. Still, when asked what other ancient whiskies remain in the family’s cellars, Michael Urquhart merely smiles and offers no comment.