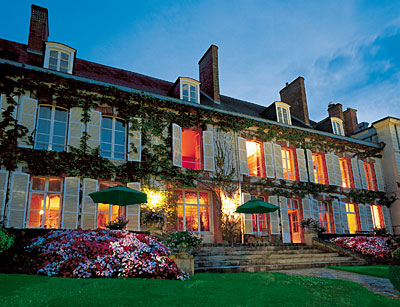 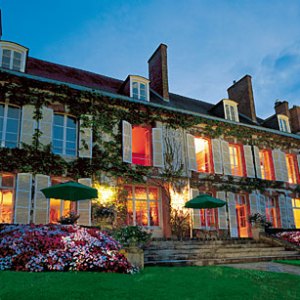 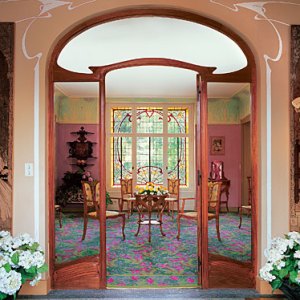 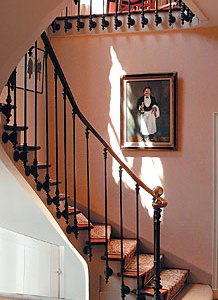 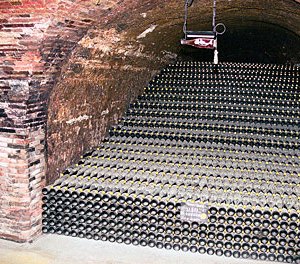 They were not the most romantic couple in the world, the 18-year-old girl from Calvados named Rose Adèlaïde Jouët and the 25-year-old Pierre Nicolas Perrier, a handsome French wine merchant. Historic accounts suggest their marriage in September of 1810 was motivated more by a family connection than a love connection. Pierre Nicolas, in fact, knew Rose Adèlaïde only as the niece of Claudine and Sophie Jouët, two wealthy sisters who had wedded his uncles.

In February 1811, with financial assistance from his father, Pierre Nicolas launched a wine company, which he dubbed the House of Perrier-Jouët. Two years later, he paid for the premises of the new winery with proceeds borrowed from a 20,000-franc dowry belonging to his wife’s aunts. Practical and ambitious, Pierre Nicolas meticulously managed the company’s books and gradually expanded the business, never dreaming that his fledgling venture would become an internationally revered brand whose Champagnes play an integral role in countless love affairs, engagements, and marriages.

For years, I had been hearing tales from friends in the wine business of a romantic Holy Grail: a visit to the House of Perrier-Jouët, along with an overnight stay at its exclusive guest residence, the Art Nouveau–inspired Maison Belle Époque. I also heard whispers of a seductive Fleurtation Menu served at the maison—a cleverly orchestrated meal featuring ingredients with purported aphrodisiac properties. So when my wife and I were offered the opportunity to partake in this experience, our acceptance of the invitation was a foregone conclusion.

On a crisp fall day under a periwinkle blue sky, we arrived in Épernay, France, about 75 minutes east of Paris and in the heart of the Champagne district, perhaps the world’s most famous wine-producing region. Liza and I were eager to indulge what we refer to as our “bubbly obsession” and push the oenophilic envelope to new, more rarefied heights.

Perrier-Jouët has dwelled in that exotic atmosphere for nearly two centuries. While its finest vintage cuvées now command hundreds of dollars, in the two years after the House of Perrier-Jouët was founded (from 1811 to 1813), its best première qualité bottles sold for less than three francs each, with seconde qualité going for 1.8 francs. But by the spring of 1817, prices had edged up to nearly four francs, and soon the new winery was thriving.

Throughout the 19th century, Perrier-Jouët Champagne was popular with both the wealthy and royal, favored by Napoléon III, the Duke of Wellington, and Russian Czar Alexander I, among others. Perrier-Jouët also stood at the forefront of oenological innovation, creating the first Brut Champagne in 1854, the first vintage cuvée in 1858, and, nearly a century ago, disgorgement à la glacé, a technique superior to others that removes sediment from wine under freezing conditions. Charles Perrier (Rose and Pierre’s youngest son) discovered that if he chilled the bottles, the sediment that gathers during a wine’s aging process would form into a kind of plug that then could be forcefully expelled prior to the addition of sugar.

Located at 26 Avenue de Champagne, just outside the town center of Épernay, the headquarters of the modern-day House of Perrier-Jouët sits alongside a handful of venerable Champagne firms, such as Pol Roger and Moët & Chandon, where visitors pay tribute to a statue of Dom Pérignon, a 17th-century Benedictine monk hailed as the father of Champagne.

However, it is at Maison Belle Époque that wine lovers can thoroughly bask in the art associated with fine Champagne. The weathered brick and stucco facade of Perrier-Jouët’s legendary guesthouse gives no hint of the priceless treasures that wait inside. But when the front door swings open, and one enters the two-story mansion, the effect is like stepping into a living museum.Since it first opened in 1990, Maison Belle Époque (located at 11 Avenue de Champagne) has been the crown jewel of hospitality at Perrier-Jouët. The house was bought by the family in the middle of the 19th century and adjoins a towering, more spectacular Victorian mansion built between 1855 and 1857 by Charles Perrier, who assumed control of the company at the end of 1847. Until recently, Château Perrier served as a Champagne museum and library, though it is currently closed for renovations. Meanwhile, a statue of The Huntsman by Le Nordez guards its courtyard.

When Perrier-Jouët Managing Director Pierre Ernst and President Michel Budin decided to redecorate Maison Belle Époque in the mid-1980s, they enlisted the assistance of Art Nouveau experts Felix Marcilhac and Jean-Pierre Camard. Over the next five years, they scoured the antique world, searching for museum-quality furnishings and objets d’art. Under Ernst’s supervision, decorator Patrice Nourissat arranged the original works so as to realize, in the final composition, a living embodiment of the company’s Art Nouveau tradition.

The tunnels are marked with Parisian street signs to help workers locate dozens of storage caves, where 10 million bottles are kept at a constant 52 degrees Fahrenheit, thanks to the insulating qualities of the region’s chalky subsoil. Photographs by Michael and Liza Lynn.

That tradition can be traced to 1902, when Émile Gallé (a master French artisan known for his iconic, ornately sculpted Parisian Metro entrances) received the commission to design a unique magnum of Perrier-Jouët Champagne. The bottle was intended to commemorate France’s Belle Époque period, a “beautiful era” of cultural advancements. Gallé conceived a dark green glass bottle with inlaid enamel swirling arabesques of white anemones. For reasons that have never been fully explained, upon completion this fanciful container was relegated to a cupboard, where it was found some 60 years later by Perrier-Jouët Cellarmaster André Baveret.

In 1969, during a lavish celebration at Maxim’s restaurant in Paris, Perrier-Jouët unveiled a custom bottle modeled after Gallé’s design and dubbed the wine “La Belle Époque” Champagne. Then, in 1975, the tête de cuvée was renamed “Fleur de Champagne” for the American market, where the flower bottle and its contents won widespread critical acclaim. Ever since, wine drinkers have identified the House of Perrier-Jouët with the Art Nouveau movement. Over the years, Maison Belle Époque has come to epitomize this image, particularly since both Champagne and Art Nouveau elicit a similar joie de vivre in the popular imagination.

Perrier-Jouët and Art Nouveau have proved to be a winning combination. The fanciful, elegant lines of the festive fin de siècle period of French art and their romantic associations furnish the perfect complement to the Champagne mood. Slightly more than 5,000 bottles of Perrier-Jouët Champagne were sold in the United States in 1975, the year the flower bottle was first introduced to that market. Nearly 30 years later, Perrier-Jouët has blossomed to become the third most popular Champagne in America.

Upon our arrival at the maison, we were handed floral-etched crystal flutes of 1996 Belle Époque Champagne before undertaking an extended tour of the house and gardens. The house’s stunning interior showcases more than 200 original works of art, including finely detailed furnishings fashioned by Art Nouveau masters such as cabinetmaker Louis Majorelle, glassmaker Antonin Daum, and architect Hector Guimard.

Colorful Gallé and René Lalique glassware is displayed throughout the house, along with Nouveau-style doorways, stained glass windows, tapestries, and paintings by Henri de Toulouse-Lautrec, Adolphe Willette, Guy Buffet, and other artists. The often-reproduced, original Buffet painting of a formally attired waiter carrying a bottle of Perrier-Jouët hangs in a place of honor above the staircase leading to several second-floor guest rooms.

We adjourned to the dining room, which features an inlaid, carved mahogany and walnut dining table, chairs, and sideboard with a chicory motif. Carefully conceived details abound, from the Muller Frères grape-draped wrought iron chandelier to walls that are upholstered in aquatic plant–patterned cordovan leather, created by A. Rozier. Still, the most artistic achievement is displayed atop the table, where Maison Belle Époque’s gourmet chefs present an extraordinary array of haute cuisine dishes, accompanied by a parade of Champagnes, on Giverny table service by Monet.The highlight of any visit to Maison Belle Époque is the Fleurtation Dinner. Though the five-course menu is subject to seasonal changes, it is likely to lead off with a glass of 1997 Perrier-Jouët Brut, serving as a steely counterpoint to what the menu describes as “glistening, briny oysters, naked except for a scant leaf of basil, soothing in a Fleur Champagne gelée.” This is followed by “tender breast of chicken enrobing a secret interior of foie gras and morel flan,” paired with the 1997 Brut Millésime, which has enough structure and acidity to offset the foie gras and mushrooms. Then, “pink lobster laced with a bodice of black truffles” makes an exquisite match for the subtle vanilla overtones of the 1996 Belle Époque. For the cheese course, “the delicate, ripe Brie dances with the earthy, dark truffle” (accompanied by a red wine, in our case, 1990 Château Cos d’Estournel), while the coup de grâce is “a soft, luscious couple of chocolate mousse and crème brûlée,” which plays off the tropical fruit flavors emanating from the 1997 Belle Époque Rosé.

Perrier-Jouët Chef de Caves Hervé Deschamps was our dinner host that first night. Deschamps’ boyish appearance belies his many years as a Champagne winemaker, which have given him a well-grounded perspective on the vagaries of the region’s microclimates and chalky terroir, those all-important factors that distinguish Champagne from every other sparkling wine.

But it was the 1997 Belle Époque Rosé that truly captured our imagination. Here the grape proportions were reversed—55 percent Pinot Noir, 40 percent Chardonnay, and 5 percent Pinot Meunier, with the added Pinot Noir giving this wine greater structure and depth. The Rosé, redolent of peach and tangerine, served as the perfect match for fruit-based desserts.

The next day, after touring the cellars, which extend six miles beneath the streets of Épernay, as well as the winery, we moved on to the vineyards—specifically to the grand cru plots in nearby Cramant. This is where Chardonnay grapes rule the windswept landscape, and Perrier-Jouët controls 99 acres (a majority of which contain vineyards that are rated 99 percent to 100 percent) that provide 40 percent of the grapes used in its Grand Brut. Cramant’s 10-acre Bourons-Leroy vineyard was also the source of the Chardonnay used in Perrier-Jouët’s first-ever Blanc de Blancs, the 1993 Fleur de Champagne Blanc de Blancs (currently showing great vanilla, toasted bread, and mushroom aromas) and the just-released 1999 edition. During vintage years, all grapes from Bourons-Leroy and Bourons-du-Midi go into the Fleur de Champagne Blanc de Blancs. In other years, they are blended into Grand Brut or Fleur de Champagne.

“Fleur de Champagne is a lighter, elegant style of Champagne which is Chardonnay-based and thus requires an optimum aging of five to seven years,” Deschamps explains. “The 1999 Fleur de Champagne Blanc de Blancs has exquisite balance and power, finishing long.”

While he is quite satisfied with the 1999 Fleur, Deschamps is partial to the 1995. “In my opinion,” he says, “the 1995 vintage enjoyed in magnums is one of the best Champagnes we have ever made. For me, the Chardonnay, Pinot Noir, and Pinot Meunier blend provides pleasure for the nose and the mouth, appealing to all the senses. Like a multifaceted crystal bowl, it is brilliant and offers many nuances and subtleties.”

Deschamps is always looking to the future and has great expectations for the just-completed harvest. “The 2004 harvest began over the last week of September,” he reports, adding that this year’s schedule was typical for the region. “We will be looking for a good level of acidity, sugar, and mature flavors in the grapes, in hopes this will be a vintage year.”

When that wine is ready for release in the next decade, we undoubtedly will have new reasons to celebrate. And we will have even more memories to treasure along with those from this visit to Épernay, where we dwelled in a sea of delicate bubbles, a world of fine art, and a life worth savoring. Champagne heaven, indeed.