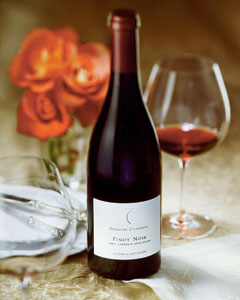 The Goldens’ Nantucket lightship will return to the island around the same time as the annual Nantucket Wine Festival, and both might have to contend with the fickle New England May weather. One year, 75-knot wind gusts blew down the festival’s tent. Another year, the bounties of an under-the-tent cooking demonstration became saturated from the sheets of rain that sideswiped the island. Denis Toner, the festival’s founder, finds no problems with scheduling the annual event during a month when such conditions can prevail. “It’s by design,” he says. “You have to be dedicated to this.”

Toner, the former sommelier at the Chanticleer restaurant in Siasconset on the island’s eastern coast, calls Nantucket a superpremium wine market, where visitors from New York, Washington, and Boston try new vintages while on vacation, then order the same bottles when they dine at restaurants back home. Recognizing a passion for wine among so many island visitors, and with the support of Nantucket’s hotels—which usually have vacancies until well into June and so embraced the idea of a May attraction—Toner launched the wine festival in 1997. The inaugural event drew 300 guests. The festival, which will take place this year from May 19 through 23, attracted 3,000 visitors last year.

Armed with fleece jackets and windbreakers, last year’s festival attendees thumbed their noses at the chilly temperatures and enjoyed the dozens of wines from vineyards such as Domaine Chandon, meals from acclaimed New England restaurants such as No. 9 Park, and the accommodations of the White Elephant, the Wauwinet, and Harbor House Village—all without the peak-season crowds that clog the island’s narrow streets. The Grand Tasting, the festival’s centerpiece, was complemented by vertical wine tastings, cheese seminars, and tours of Nantucket’s signature houses.

“This was the economic capital of the United States in the early 19th century,” Toner says. “We have the whaling history and the tradition of dining wealth and living large. Dining has carried on. People here love food and wine, and we want to share that part of Nantucket with the world.”