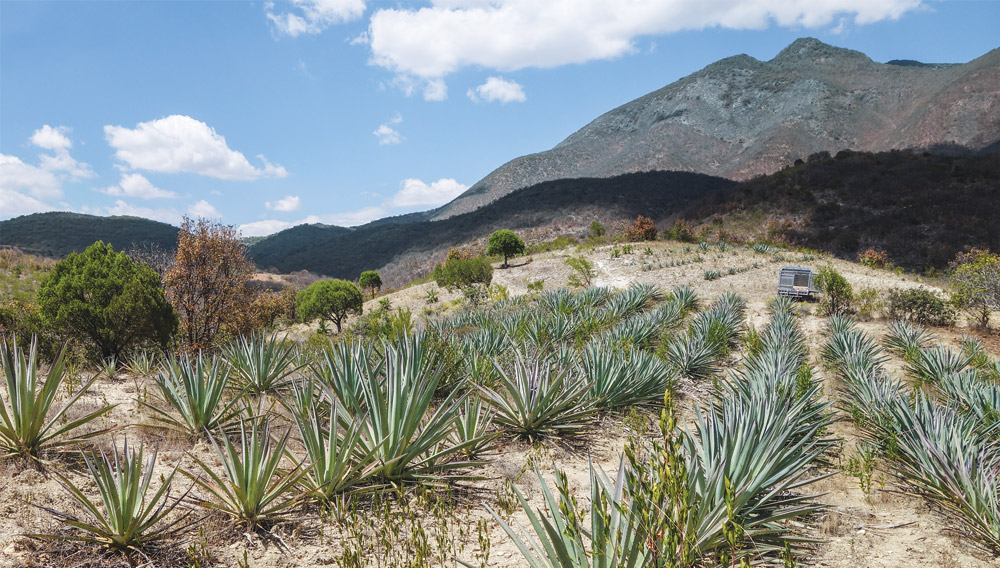 The agaves are piled 3 feet high, shorn of their sword-like paddles and stacked on the precipice of a pit lined with volcanic rock and radiating heat like a subterranean furnace. Each piña—as the agave hearts are called, because of their resemblance to enormous pineapples—represents about eight years of slow growth and a harvest so difficult it makes what is usually referred to as “foraging” seem ridiculously twee. This is wild Mexicano agave, pried from the scorched hillsides surrounding Oaxaca, Mexico, but only after resisting with every fiber of its being—beyond the sharp paddles that can grow 6 feet high, it exudes a liquid that causes a nasty rash on contact. The men who gather it have built up an immunity to the agave’s sting, and now, with expert swings of a long-handled ax, they split, quarter, and toss the piñas into the pit, where they will roast for three days, until they are the color of aged tobacco, sweet as honey, and tinged with the flavor of mesquite and oak, eucalyptus and pinecones.

That a process so primitive produces a drink of such exquisite subtlety is one of the many paradoxes of mezcal. A sip of this powerful spirit—some of the finest examples are more than 90 proof—carries the delicate, piney flavor of the agave, expressing not only the variety, but also whether it is wild or farmed and the specific woods used to roast it. Other distinctions depend on the type of water used to distill it—river versus well—and whether the still was made of clay, copper, or stainless steel. Connoisseurs can even taste how closely the palenqueros chopped the leaves from the heart of the plant. “All of this,” says Vicente Cisneros of El Silencio, the premium mezcal that the roasting agaves will eventually become, “is the art of the mescalier.”

Such hyper-artisanal details are making mezcal a star among mixologists and chefs. Premium tequila may have created a taste for agave-based spirits, but mezcal is a craft product of a higher order. Tequila is made from only one variety of farmed agave—the Weber blue—but mezcal can be made from dozens of different varieties, and only one is widely cultivated, the espadín. Mezcal agaves may be 50 years old when they are harvested, and some species are extremely rare. Lorena Terán, sommelier at Pitiona restaurant in Oaxaca, offers a list of 62 mezcals, including selections such as a Real Minero mezcal made from the blanca agave, a variety that is nearly extinct and generally no longer used. Terán has two bottles of Real Minero’s final, 26-bottle batch, distilled in clay pots in the nearby village of Santa Catarina Minas. It costs about $1,100 a bottle. “For very rare bottles, we sell only by the bottle,” she says. “It’s like a rare wine—you would not sell that by the glass.”

The production process is also more nuanced. To make tequila, the piñas are simply steamed, but for mezcal, small batches of piñas are roasted “in a borderline prehistoric way,” says chef Alex Stupak of Empellón Cocina in New York City, who features mezcal on his spirits list and in dishes on his menu. “There’s a growing awareness of how labor-intensive and artisanal mezcal is, and it makes it more special.” Still, as celebrated as mezcal may be, it represents but a drop in the ocean of tequila, which at retail is a $6 billion industry in the United States. “Mezcal is less than 1 percent of tequila sales,” says Frank Coleman of the Distilled Spirits Council of the United States. “It’s a craft distilled product and it is just getting a toehold.”

While mezcal is made in a number of regions in Mexico, the finest comes from Oaxaca, the product of the many small distilleries called palenques dotting the villages around the city. In Oaxaca, agave is everywhere—the plant grows in manicured rows in the town center, Plaza de Santo Domingo, and is rendered over and over by the city’s many artists. It is considered sacred—mezcal’s origin story involves a bolt of lightning, an agave, and a spontaneous gusher of the spirit—and is believed to have healing properties as well. Most of the families who make mezcal have done so for generations, and now they are being joined by newcomers such as El Silencio’s Cisneros and his cofounder Fausto Zapata, two friends from Los Angeles who launched the brand last year. Elliott Bennett Coon, an artist who moved from Oakland, Calif., to Oaxaca about two years ago, plans to debut an herb-infused mezcal called Gem & Bolt later this year. Before them came Ron Cooper, another American artist, who paved the way for premium mezcal in the United States when he started Del Maguey in 1995. Earlier this year, Cooper brought the chef-mezcal connection full circle when he collaborated with José Andrés on a mezcal made with Ibérico ham that costs $200 a bottle.

Zapata and Cisneros have partnered with the makers of Koch mezcal, whose maestro mezcalero, Pedro Hernández, is a ninth-generation mezcal maker in the village of San Baltazar Guelavila, about an hour outside of Oaxaca. After the agave is roasted, it will be put into a small cement ring and crushed by a millstone—powered by a donkey—until it becomes a thick, chunky pulp, which is mixed with water and fermented in wood vats for about five days. “The mezcalier smells, tastes, listens,” to the developing brew, says Zapata, even watching the liquid for movement. When it is ready, it is distilled twice, with Hernández making the critical decision of when to cut the “head” and the “tail”—the early and late parts of the distillation that contain off flavors or high alcohol. “He determines where the flavors start, tasting every 30 minutes,” says Carlos Moreno, Koch’s CEO. “Then every 20 minutes, tasting closer and closer, and at the end, one after another.”

This year, the distillery will produce about 2,000 bottles of Koch, each made with a specific wild agave, and 10,000 bottles of El Silencio, made with a blend of Mexicano, espadín, and tobasiche. Every bottle will be the result of the same small-batch process yielding about 160 liters each time. The finished El Silencio, which sells for about $75, is cut with a little water, to temper the mezcal’s characteristic sensation of a blue flame licking at the tongue. But it is still a potent 80 proof, smooth without giving up the rustic character of the drink, with the flavors of fennel, white pepper, and fine saddle leather lurking behind a merely lip-numbing burn.

Artisanal mezcal such as this is usually sipped as an aperitif or a digestif, straight, in a short glass with an open top, Terán of Pitiona says. While some Oaxacans—and plenty of visitors—like to chase a sip with a bite of orange dipped in sal de gusano—an earthy blend of ground red chili, salt, and pulverized agave worm—Terán is adamantly against it. “We don’t use chili and salt, and we don’t make cocktails with it,” she says. “When you have mezcal that’s so beautiful, so complex, you don’t want anything to interfere.”

While mezcal may be native to several regions in Mexico, Oaxaca is where it reaches its pinnacle. Here are a few places in and around the city that offer extraordinary opportunities to explore this complex spirit.

El Silencio and Koch mezcals are made here by Pedro Hernández, a ninth-generation maestro mezcalero. The small distillery, called a palenque, is about an hour’s drive southeast of Oaxaca in San Baltazar Guelavila. The entire process takes place here, from roasting the agave hearts, called piñas, in a rock-lined pit, to the bottling, where a line of four women hand-fill and seal each vessel. Like most palenques, it is not generally open to the public, but CEO Carlos Moreno offers tours by appointment.  +52.951.132.2436, www.mezcalkoch.com, www.mezcalelsilencio.com

This snug tasting room and shop near the historic center of town—Plaza de Santo Domingo—showcases the work of Oaxaca’s accomplished microbatch mezcaleros. Their production is too small (and unregulated) for export, so this is a rare opportunity to taste the local moonshine and get a sense of the range and power of the spirit. The bartenders explain everything from the proper glass (a jícara, they say—the delicate cup carved from the fruit of a tree that grows on the Oaxaca coast) to how to gauge alcohol content by sight (give the bottle a shake; the more bubbles, the higher the proof) to the subtle flavors and aromas imparted by different agaves and production methods. Reservations are preferred. +52.951.514.0082, www.mezcaloteca.com

Two doors down from Mezcaloteca, this bottle shop and boutique offers a good selection of artisanal mezcals, including many brands not available in the United States, such as Secretos de Yegolé, or rarely available here, such as Siete Misterios, Nuestra Soledad, and Yuu Baal. Keep an eye out for mezcals made with unusual varieties of agave, which tend to stay on their home turf. +52.951.514.2523, www.mismezcales.mx

A meal at Pitiona is best begun at the bar, where 62 rare and small-batch mezcals are available by the glass or bottle; the list is organized by the variety of agave, as well as the mezcal producer, and sommelier Lorena Terán is an excellent guide. The contemporary art-filled dining room awaits, with an equally astonishing menu from chef José Manuel Baños Rodríguez, who coaxes complex flavors from simple ingredients (a rich ruby soup is made with little more than beef stock, tomatoes, noodles, and a tangy sphere of Oaxacan cheese) or goes for broke with showpieces such as a glistening white chunk of sea bass swathed in chichilo mole and served under a glass dome holding pine and cinnamon smoke. The dome is lifted, and the smoky chichilo ascends to another dimension. +52.951.514.0690, www.pitiona.com

A table on the rooftop terrace is the ideal spot to savor the view of Santo Domingo and the nuanced cooking of chef Alejandro Ruiz, who makes inventive versions of traditional dishes, such as a cube of suckling pig confit, as layered as fine pastry, served with almond mole. The spirits list includes 20 mezcals and numerous variations on the mezcalina, a cocktail in which mezcal is shaken with tamarind, passion fruit, or hibiscus and served in a glass rimmed with spicy, earthy sal de gusano. +52.951.516.8531, www.casaoaxacaelrestaurante.com