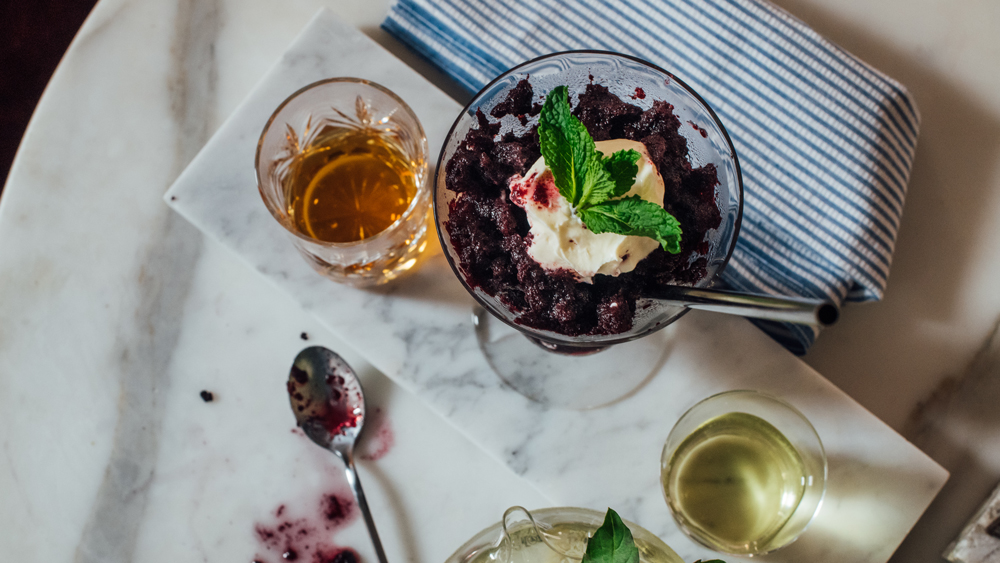 Alcohol is the great social lubricant, the eradicator of inhibitions, the “rose colored glasses of life,” in the words of F. Scott Fitzgerald. But what if it were also a bridge to the soul of a place, a way to mark its evolution in a glass? Loa, the bar at the International House hotel in New Orleans, aims to create a conduit with a specialty cocktail menu that honors local traditions.

“New Orleans is like no other place,” says Sean Cummings, city native, real estate developer and arts advocate, who opened International House in 1998. “The architecture, the food, the music, the culture. We observe certain traditions and celebrate rituals, often cocktail in hand. It’s a natural complement.”

International House, the city’s first boutique hotel, is located in a historic Beaux Arts building in the city’s Central Business District, less than a quarter mile from the storied French Quarter. The 117-room lodging was originally designed in a breezy Miami-esque style. In 2021, the interior underwent a decorating overhaul, emerging as a sensual, Parisian boho-inspired fantasy.

Loa, named for the divine spirits of the vodou religion, is now decked out in velvet-upholstered seating nooks, an altaresque wall full of bottles and candles and arched-top mirrors that reflect the warm amber glow of glass pendant lamps dangling from the ceiling. Along with this makeover, Loa is placing renewed focus on evoking “taste of place.”

To capture the essence of the Big Easy today, Cummings looked to its past. He identified seven widely celebrated local traditions, then tapped International House creative director Alan Walter to translate them into signature drinks. Each of the seven cocktails are served for a limited time each year, around the holidays they pay tribute to.

For Walter, who considers himself a “writer at heart,” the process of creating the seasonal drinks was relatively quick, once he boiled them down to two core concepts: the flavor and the narrative. “Cocktails are like highway markers in time. They’re little rituals in themselves,” he says. “The narrative ties the drink to the larger ritual.”

After homing in on the story, Walter sourced ingredients to bring them to liquid life. These include small-batch and boutique spirits, along with an array of local herbs, flowers, mosses and elixirs, many of which seem more at home in a Bourbon Street apothecary than a bar.

As the most venerated ritual in New Orleans, Mardi Gras has two cocktails. The Lilac Breasted Roller is named for the flashy African bird whose plumage just happens to bear the Carnival colors of green, purple and gold. “I thought, ‘Layered drinks are so out of fashion. Maybe we should make them in fashion again,’” Walter says. The drink features violet liqueur, gin, Cloosterbitter (a floral, bitter Dutch liqueur), saffron syrup and Peychaud’s bitters that begin as colorful strata, then turn into a golden martini-like concoction once stirred.

The festival’s second drink, Lupa the She Wolf, is an homage to the characters featured in a series of watercolors by Gilded Age artist Carlotta Bonnecaze, the first woman and Creole to design costumes and floats for Mardi Gras. Using the brunch staple brandy milk punch as a jumping-off point, the cocktail presents maté tea spiked with aperol, Prosecco and Ojen, a sweet, anise-flavored liqueur that’s a favorite around the city. Walter tops off the cocktail with citrus syrup and Sorrento lemon grown in Loa’s own grove in the Bywater district. It’s theatrically served by a frills-clad, Victorian jackass-headed waiter.

For All Saints’ Day, a celebration of the triumph of life over death during the yellow fever epidemics of the 1800s, Walter begins with a Reposado mezcal base, in honor of Day of the Dead, the Mexican foundation of the ritual. Over the spirt, he pours house-made pecan milk and tops it with edible flowers—nods to the New Orleans tradition of white-washing tombs and decorating them with bright yellow chrysanthemums and red coxcombs.

The Saint John’s Eve cocktail, which honors the holiest day of the vodou calendar in June, was the trickiest for Walter to create. He wanted to use an elixir, symbolic of the holiday’s focus on healing and fresh starts. Walter consulted with Sallie Ann Glassman, the best-known vodou priestess in New Orleans, to create a complex mixture of liqueur and local ingredients like Spanish moss and sweet olive, a tiny white flower that’s abundant in New Orleans in the summer.

“It’s fun to put something that’s so present locally into a drink,” he says. “It’s not about sticking them in there to get attention; it’s about not leaving anything out.”

Cummings hopes the events and seasonal cocktails evoke a connection to New Orleans a guest might not make simply by visiting its tourist attractions. “This is not a wealthy city,” Cummings says. “We’ve been kicked around a bit by politics and mother nature. Still, there’s this joie de vivre. One of the best ways to enjoy a gift like life is to share amazing food and drink with the people you love.”

And, in the process, gain a deeper appreciation for the resilience of the city and its many cultural influences.