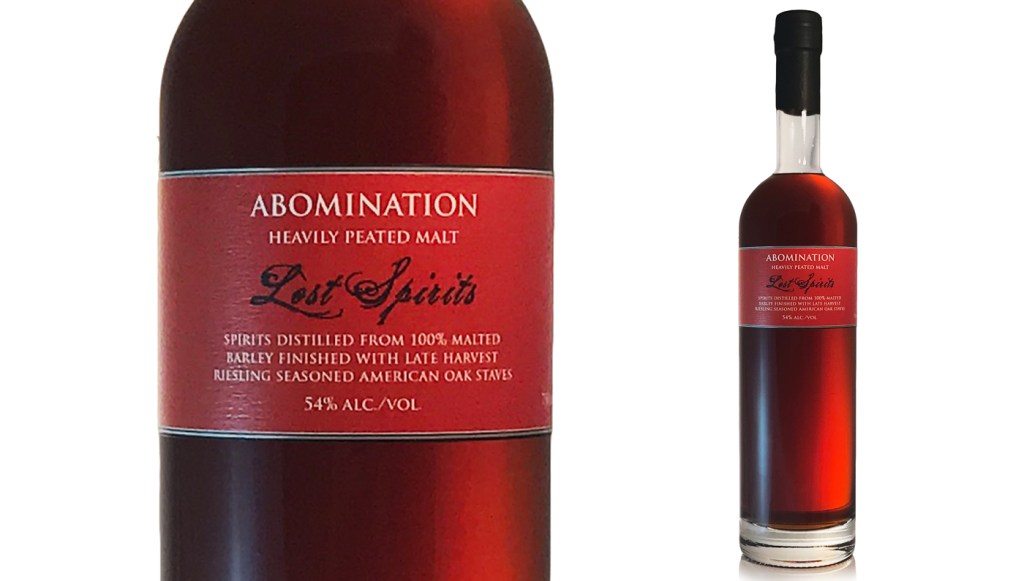 California-based distillery Lost Spirits made waves a few years ago with a series of heavily peated single-malt whiskies, among the opening salvos in the American single-malt movement. But while other distilleries brought the category to prominence, Lost Spirits cofounder Bryan Davis focused his attention on rum—and coincidentally disrupted the entire spirits industry. His rums were, unbeknownst to the rum mavens who bought and raved about them, experiments with rapid aging courtesy of THEA, Davis’s patent-pending reactor. Using photocatalytic light to break down wood polymers and bind the molecules to alcohol, Davis was able to create the chemical equivalent of decades-old spirits in mere days.

Now Davis and cofounder Joanne Haruta have come back to whisky, with new technology in tow. Distilling and aging whisky is a time-honored craft, which means any innovations are met by the industry with a degree of resistance.  Abomination, as Lost Spirits’ two new peated malts are known, can’t even be called “whisky” on the label, as they haven’t been aged the three years required to sport the designation.

Not that they look or taste young. Davis took heavily peated Scotch whisky that had been traditionally aged in wood for 12 to 18 months and then put it in the reactor, along with American oak staves “seasoned with late-harvest Riesling,” according to the labels.  One set of staves was toasted, one was charred. Their dark amber color and rich, layered flavors bely their tender age; these are, for all intents and purposes, fully matured whiskies.  The toasted oak-finished expression, also called “The Crying of the Puma” ($50), is slightly softer and fruitier, while the charred oak-finished “The Sayers of the Law” ($50) is drier, with a peppery tingle on the tongue.  Both bottlings start out on the mild side, and then unfold into the smoky, campfire-embers flavor typical of heated whiskies—think Islay malts like Ardbeg or Laphroaig.  The finish on each is long, dry, and warming.  They’re not for the faint of heart, but for fans of smoky malts, they are fine additions to the canon. And for fans of technology, they are a taste of the future. (lostspirits.net)