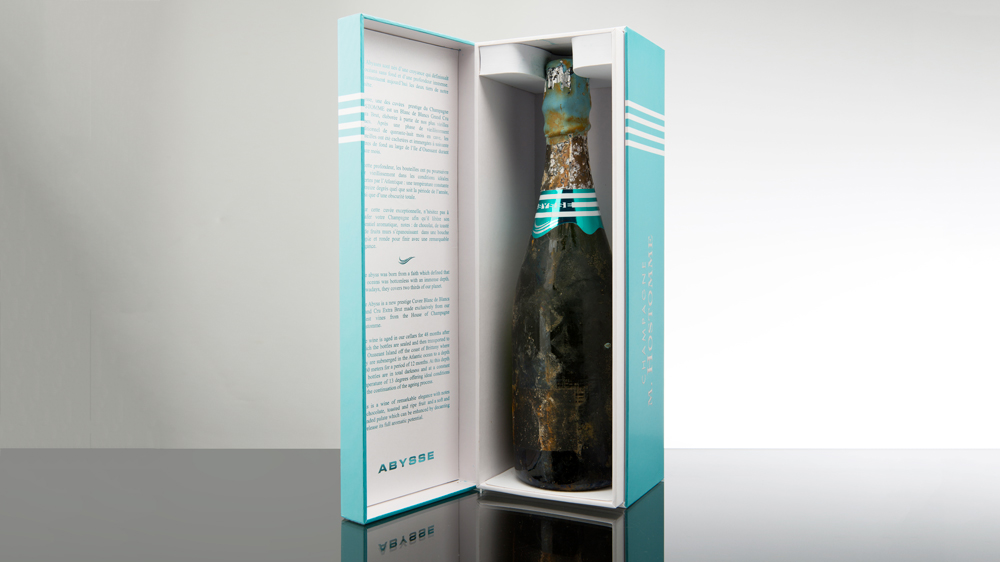 The elegant, elongated, white-and-blue box hardly prepares you for the subtle surprise of opening it and seeing a bottle of M. Hostomme Blanc de Blancs Champagne covered with splotches of dried mud and surrounded by broken chips of blue wax. The rusted wire cage and prematurely darkened cork only add to this bubbly’s mystique from the deep.

But that is the persona of M. Hostomme Abysse ($1,900), a Grand Cru Brut that has spent the last year of its maturation submerged in 200 feet of water off the coast of a remote island in Southern France. Prior to being secretly lowered to the ocean floor in a locked steel cage (to prevent theft by wayward scuba divers), this extremely limited release of the 100 percent Chardonnay sparkling wine from the Grand Cru de Chouilly vineyards had spent 4 years on the lees after fermentation in stainless-steel tanks and Burgundy French oak barrels.

Aging Champagne underwater isn’t entirely unknown to French producers; Louis Roederer and Veuve Clicquot (which is currently conducting a 50-year experiment in the process) are two of six other Champagne houses involved in this somewhat unorthodox method. But Abysse is the only ocean-aged Champagne that is being exported to the United States, and its quantities are so limited that only 60 bottles a year are allocated. As for the benefits of underwater aging, being submerged in total darkness for 12 months at a constant temperature of 55°F provides the optimum environment for this delicate wine.

“All sides of the large, rectangular, customized steel box in which the Champagne bottles are placed are enclosed, with the exception being the top of the box, which is a steel grate,” explains Bobby Brower Jr., president of Brower Family Wines, the U.S. importer of Abysse. “The open-grated top allows the ocean water to flow freely between the bottles, creating even water distribution throughout the submerged bottles while also exposing each bottle to extremely subtle temperature and current fluctuations. Each bottle’s cork is waxed over, preventing water or oxygen from entering the bottle,” he says. After the bottles are ocean-aged for a year, each is packaged and presented exactly as it was found when removed from the steel boxes. The sand, shells, starfish, and other unusual attributes are all unique to each bottle. “The ocean determines the ‘label’ of Abysse,” Brower says.

And to an extent, it also plays a role in the final character of this conversation-inspiring Champagne, with its fine stream of bubbles. Its floral touches of citrus and white pepper make Abysse a true underwater treasure. Just be sure to wipe off the bottle and its neck before pouring.