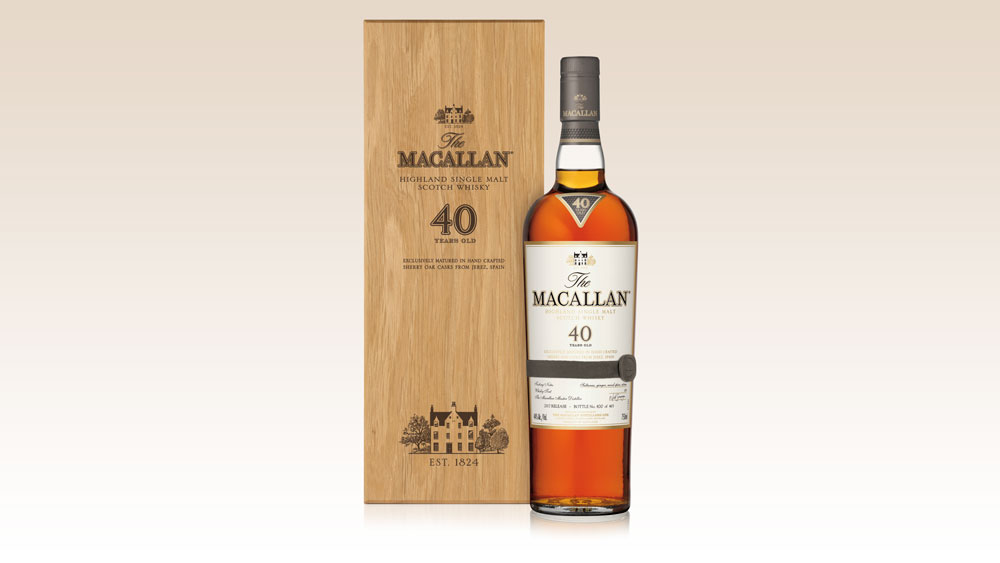 Whisky lovers who are partial to sherried single malts are well acquainted with The Macallan, a distillery that exuberantly embraces the effects of sherry-seasoned oak on whisky as it ages. There are different ranges in the Macallan portfolio, but Sherry Oak is perhaps the most beloved, composed of whisky aged entirely in oloroso-sherry-seasoned casks from Jerez, Spain. Sherry Oak 40 ($9,000) is the second edition of this whisky, the first having launched in 2016. The new whisky has been released in a very limited run of just 465 bottles worldwide, 70 of which will be available here in the U.S., making this an instant collectible spirit, especially for those who really enjoy the influence of a good sherry barrel.

Sherry Oak 40 is produced from just three casks—a combination of two sherry butts and one hogshead. The Macallan has a long and intimate relationship with select Spanish sherry bodegas and cask makers. According to master distiller Nick Savage, the company invests more in sherry-seasoned casks than any other distillery, paying attention to all the details of the cooperage craft. After select trees are felled, they are cut into barrel staves and left to dry in the Jerez sun for a period of time. Barrels are then filled with sherry for 18 months before being emptied and shipped to Scotland, ready to be refilled with new-make whisky. No added color is needed in this whisky, as the sherry-infused oak imparts a beautiful dark amber tone to the liquid.

This rare, aged spirit has strong notes of cinnamon, dates, and figs, with a hint of spice and a splash of citrus on the nose. Anyone who enjoys the 12-year-old core expression in the Sherry Oak range will likely be seduced by the 40, which showcases the development of flavor provided by the longer journey in those sherry-seasoned casks.