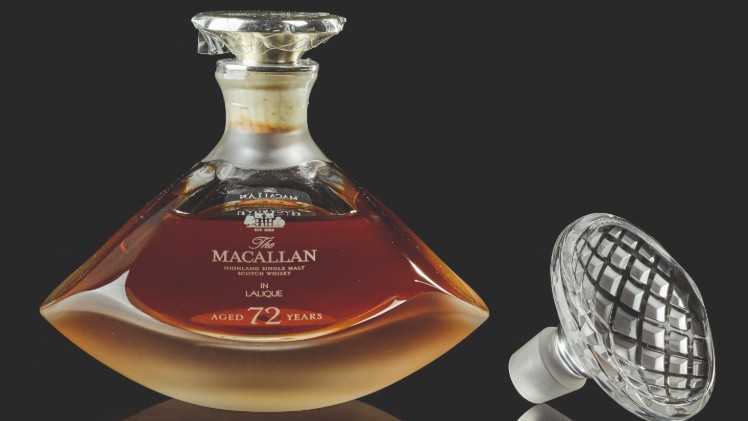 Elbows—and credit cards—at the ready for one of the whisky and Bordeaux sales of the decade, coming March 18 in London. In one corner of Sotheby’s Finest and Rarest Spirits sale, there is the oldest Macallan in history, an exceptionally rare bottling from the 1940s, when Scotch production had all but ceased in wartime Scotland. In another, the oldest Karuizawa bottled, from 1960.

Meanwhile Gordon & Macphail’s Urqhart family is offering vintages stretching back to the 1930s, including four limited crystal decanters from their private collection, the first time that any decanter numbered “#1” has been released for sale from Gordon & MacPhail.

For lovers of the Macallan, there is a Lalique Six Pillars Collection—six crystal decanters ranging from 50 to 65 years old, rarely seen in an unbroken vertical (est. $420,000-$630,0000); and the Macallan Lalique Genesis Decanter 72 Year Old, 42 percent (est. $92,000-$131,000). That the whisky was even in production was remarkable as it was an interesting time for spirits. During the war, barley—normally used for whisky production—was rationed and used to feed the British population, so raw materials for distillation were scarce. On top of that, many production facilities were transformed into crude oil factories and manufacturing hubs to support the war effort by making soldiers’ uniforms and other things.

At the time, Macallan was under the control of the Kemp Trust. During the war, there was pressure for all distilleries to cease production, but the trust pushed back and protected the Macallan’s interests. Some concessions had to be made, however, such as using peat to dry their barley rather than coal, which was scarce.

The Macallan wasn’t the only distillery to continue production, nor is it the only wartime whisky in this sale. There are also two 1943 Vintage Glenlivets from Gordon & MacPhail, one of which is a 70 Year Old Private Collection Decanter consigned directly from G&M.

“This storied Macallan decanter represents so much more than a collectible whisky,” says Jonny Fowle, Sotheby’s spirits specialist. “It encapsulates a moment of rarely seen 1940s wartime distillation, a period when most Scottish distilleries were shut, and the pinnacle of Macallan’s oak maturation.”

The Karuizawa 52 Year Old Cask #5627 Zodiac Rat 1960 will be of particular interest to eastern collectors, as it coincides with the Year of the Rat in the Chinese Zodiac Calendar, with an estimate of $210,000-$288,000. The 52-year-old whisky is the oldest Karuizawa to have been released, and the bottle being offered is one of only 41 bottles that were produced. Originally released in 2013, each is uniquely identified not by a bottle number, but by an individual character—or katabori netsuke—that was carved from the oak cask head of cask #5627.

In the final corner, Sotheby’s is offering wines from the storied cellar of George Ortiz (1927-2013), one of the world’s great collectors of antiquities. Highlights include two cases of the legendary Cheval Blanc 1947 (est. $170,000-$223,000 for 11 bottles), parcels of Margaux and Latour from the same vintage, and Yquem from the 1920s. The 1947s were all bought en primeur by Ortiz’s father, and the vintage is considered the greatest Cheval Blanc of the last century, being both very powerful and beautifully balanced. In 2015, Oliver Ortiz, the son of the late George Ortiz, watched the recorking process at the château. Each bottle was tasted, topped up, re-labelled, and closed with new corks and capsules, under the direction of Pierre-Olivier Clouet, Cheval Blanc’s technical director, and packed in new original wooden cases.

“It always gives us special pleasure when we are asked to evaluate a family collection of wine and then entrusted with bringing a part of it to auction,” says Serena Sutcliffe, Master of Wine and honorary chair of Sotheby’s Wine. “This is a collection that combines truly gasp-making, historic wines with other bottles (or cases) that we can all enjoy on a regular basis. The choice veers between First Growth 1947s to Super Seconds from the ‘90s and the best of Médocain properties from this century at very accessible prices, with really exciting stops along the way, such as full cases of Margaux 1982.”

Lastly, unearthed from the private collection of the Earl Spencer (brother of the late Diana, Princess of Wales) at Althorp House, comes a dizzying array of Bordeaux stretching back to 1945, illuminated by a case of the exemplary Haut Brion 1989. The majority of this collection was acquired by the current Earl Spencer’s father and has never moved from the labyrinthine cellars under Althorp House.